Our brain grows fastest from birth to the age of eight, exerting a long-lasting impact on the rest of our life journey. Members of the Centre for Cognitive and Brain Sciences (CCBS) at the University of Macau (UM) are therefore researching the neural mechanisms underlying children’s cognitive behaviours to promote early intervention for cognitive disorders, as well as intellectual and personality development. 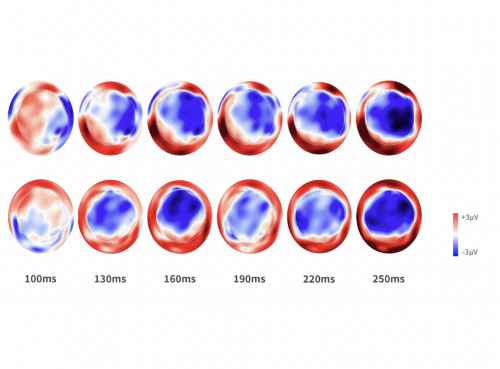 The brain of a two-year-old can reach 80 per cent of the size of an adult’s, says Zhang Juan, associate professor and interim director of the Centre for Early Childhood Education and Child Development in the Faculty of Education, and also a CCBS member. She says the brain contains as many neurons at birth as it will need in adulthood. To develop various high-level cognitive skills, such as the ability to perceive, think, learn, and communicate, neurons constantly make new neural connections through structures called ‘synapses’, which can transmit bioelectrical and chemical signals to each other. 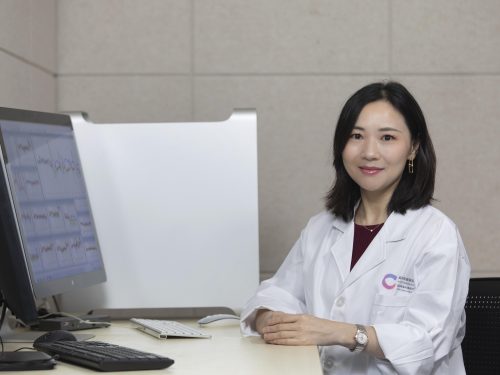 The brain of an average three-year-old child has about 100 trillion synapses, which are twice as many as adults, and the excessive synapses steadily drop after adolescence. ‘The networks of neurons and synapses formed in childhood have a profound impact as the foundation for our learning, adaptation to change, and physical and mental well-being,’ says Prof Zhang.

Prof Zhang adds that early brain development is strongly influenced by interpersonal interactions and environmental factors. High-level brain functions, such as learning and emotion management, involve the frontal and medial temporal lobes, which are particularly sensitive to experiences during early development. Therefore, if children have inadequate or poor environmental experiences in their first four or five years of life, such as excessive stress, it is likely that their ability to deal with emotions and build positive personal relationships (collectively known as ‘social-emotional skills’) will show deficits and delays, with a significant increase in the incidence of mental illness. ‘That’s why our team is studying how parents’ responses affect their children’s timely emotional responses, thinking skills, resilience, and self-concept. We also use mathematical models to predict how parental response preferences influence their children’s behaviours,’ says Prof Zhang.

Prof Zhang’s research team also studies the brain responses of people of different ages when they are presented, in their first and second languages, with words associated with emotion. ‘Emotion perception is an essential skill that children must acquire. Without the ability to read the emotions of others when they speak, we wouldn’t be able to lead successful social lives,’ she says. 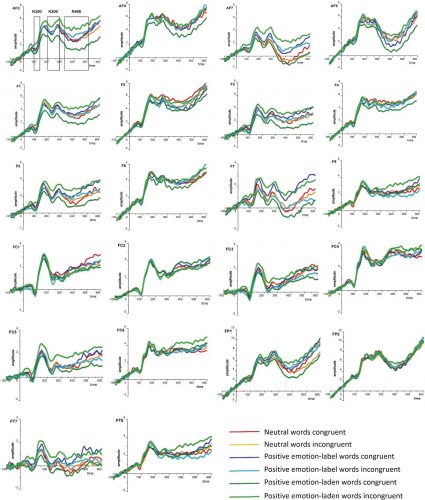 Chinese-English bilinguals taking part in a research project had electrodes stuck to their scalps when they looked at words associated with different emotions. The electrodes measured their electrical activity in the brain, as shown in the figure.

In a research project, Prof Zhang’s team observed that words associated with positive or negative emotions triggered N170, which is a type of event-related potential (brainwaves triggered by a specific sensory, cognitive, or motor event, or ERP), but in different ways. These words also elicited another type of ERP, namely the late positive component (LPC), in the right parietal lobe, with emotion-laden words eliciting larger LPC than emotion-label words. In another study, she found that emotion-label words in a second language can unconsciously affect the way we interpret emotions, while emotion-laden words in a second language do not seem to have this impact.

Prof Zhang’s team also studied Chinese children with autism who speak Chinese as their first language and English as their second language. The researchers found that children with autism were less sensitive to stress in English than typically developing children. In addition, their right hemisphere is more activated than the left hemisphere when processing language, while the opposite is true for healthy children. 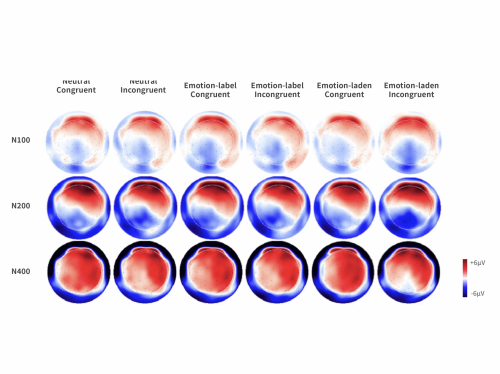 The research team has invited Chinese-English bilinguals to look at words associated with emotions represented in different ways. This figure shows the distribution of three event-related potentials, namely N100, N200 and N400, in the scalp when they saw the words.

Apart from ERP-based studies approaches, Prof Zhang’s team used behavioural experiments, functional magnetic resonance imaging (fMRI) and functional near-infrared spectroscopy (fNIRS) to find out how the brain processes different emotions and what role language plays in emotions. ‘By tracking the activation patterns in the brain associated with emotions, we can gain further insights into how children learn vital emotional skills and what obstacles might stand in the way,’ she says.

Seizing the Moment for Early Intervention

Thorough research into the development of children’s brains can be of great benefit for the prevention and treatment of diseases. According to the World Health Organization, 10 per cent of children and adolescents worldwide have experienced a mental disorder, but the majority of them do not seek help or treatment. These disorders include epilepsy, developmental disabilities, depression, anxiety, and behavioural disorders, many of which are associated with brain development. ‘Since children’s brains have an enormous capacity to change, the earlier you intervene in brain disorders, the more effective it is,’ says Prof Zhang.

Moreover, many studies have shown that the earlier children receive rich language input, the better their language skills will be, and that the critical period for language learning is before puberty. Therefore, if children have problems in language or emotional management, earlier intervention is always better. Previous research has also found that reading interventions (such as dialogic reading, choral reading, or making word lists) can change brain activation patterns in children with dyslexia, especially an early age.

‘Every stage of early brain development is important, and a deep understanding of the precise neural mechanisms is key to the timely detection of abnormal brain development,’ says Prof Zhang. ‘The growth of children’s brains is shaped not only by nutrients and genes, but also interpersonal interactions and the environment in which they live, which have a real impact on brain structure and cognitive abilities, so there is every scientific reason to raise a happy child.’