Imagine if you were able to control your TV, adjust your lights, and type on your mobile phone with only your brain while sitting comfortably at home. Would you like to obtain this superpower? In recent decades, scientists have made remarkable progress in building brain-computer interfaces (BCIs). At the University of Macau (UM), a research team has developed some different types of BCIs. Members of the team have also won championships in international and national brain-controlled typing competitions and have even set a world record. 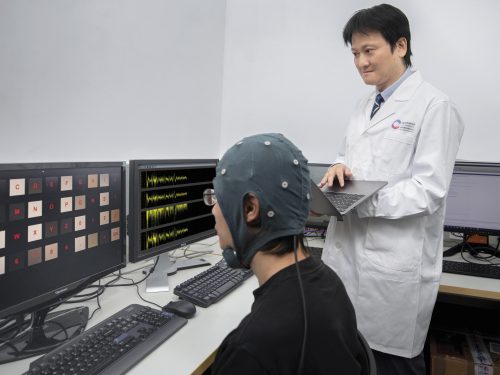 According to Wan Feng, associate professor in the Department of Electrical and Computer Engineering and the Centre for Cognitive and Brain Sciences at UM, there have been various commercial attempts to implant microchips in human brains for clinical trials in countries such as the United States and Australia. These chips can partially decode thoughts to control computers and machines, allowing people with disabilities to control prosthetic arms and legs. ‘This type of BCI should be quite effective, but it requires brain surgery, including drilling a hole in the skull to implant the chip, which poses significant risks to users,’ says Prof Wan.

To avoid these risks, scientists are developing non‐ invasive BCIs that do not require surgery. Instead of implanting a chip in the brain, an individual can wear an electroencephalogram (EEG) cap that records brain waves. ‘Take brain‐controlled typing as an example: We can show on the computer screen several coloured boxes, each containing a letter of the English alphabet and flashing at a certain frequency. When we look at one of these boxes, our brain generates electrical activity at the same frequency or at a multiple of the frequency of the visual stimulus,’ says Prof Wan. ‘The related brain signals are called steady state visually evoked potentials [SSVEP], and they can be interpreted as computer commands to enter the letter we want.’ 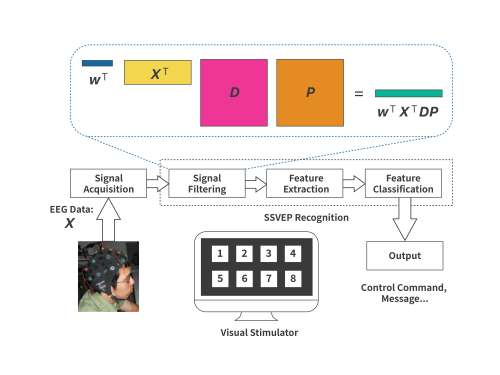 A flowchart of a standard SSVEP-based BCI

A World Record in Brain-Typing

For over a decade, Prof Wan has developed BCIs based on different types of visual evoked potential (VEP) and designed algorithms to accelerate the connection between humans and computers. He has published his research findings in many academic journals in the field. Under his guidance, Prof Wan’s students collaborated with researchers from the University of Hong Kong (HKU) in major competitions. In 2019, they formed two teams, both led by students from UM’s Department of Electrical and Computer Engineering, to compete in the World Robot Conference Brain‐Computer Interfaces Contest cum the Third China Brain‐ Computer Interfaces Contest. One of the teams won the grand championship and the special prize, as well as the championship and a first prize in both the ‘VEP’ track and the ‘Motor Imagery’ track. In addition, a member of the team managed to type a document with an average speed of 0.4 seconds per letter, setting a world record.

At the same event in 2020, the UM‐HKU team won the grand championship and the special prize again. The team also won the championship in the Event‐Related‐Potentials‐based BCI category, as well as first prizes in four out of seven other categories.

Prof Wan says that despite many advances, BCIs are not yet robust enough for large-scale commercial use. One of the challenges is that people have different brain shapes and EEG patterns, so the same EEG device may not work for everyone. Even if there is only one user, the patterns of his or her brain activities will change over time. ‘Most EEG devices are not fully plug‐and‐play as they require a long calibration before we can use them,’ he says.

For this reason, Prof Wan’s team is using transfer learning, a machine learning method involving deep learning models pre‐trained on data from other users, to develop technology for EEG devices so that they can adapt more quickly to the brains of users. Moreover, his team is also developing methods to adapt the way computers analyse brain waves to real‐time changes in the brain. The team has also proposed using neurofeedback to adjust the brain activities of users to better connect with BCIs. 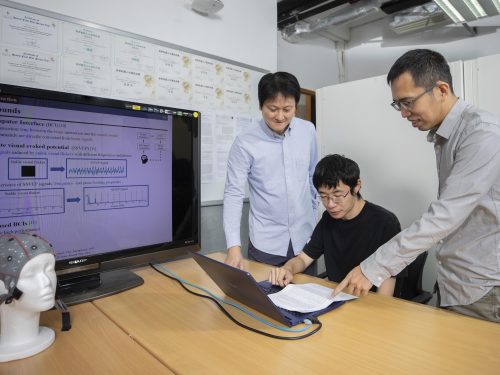 Another challenge is that VEP‐based devices cause visual fatigue after prolonged use. Prof Wan, who is one of the first researchers to address this problem, has developed ways to adjust the visual stimuli on the screen to reduce visual fatigue and the mental workload of users.

According to Prof Wan, an SSVEP‐based BCI captures brain waves by placing multiple electrodes on the scalp, so the signals detected by the electrodes can be combined for further decoding. During this process, algorithms are applied for ‘spatial filtering’, which can enhance EEG signals related to SSVEPs. Prof Wan’s team has proposed a framework for understanding approximately 20 popular spatial filtering algorithms. Using this framework, the team has developed three new algorithms that can speed up brain‐controlled typing.

Prof Wan believes that BCIs will radically change the way we live and work by enabling people to do many things at the speed of thought, as seen in science fiction movies. He adds that the BCI will be a powerful tool, allowing people who suffer from disabilities and other serious illnesses to regain the ability to live independently. BCIs will also help astronauts perform complicated tasks much more efficiently.

Prof Wan’s team is working to develop more efficient ‘plug-and-play’ BCIs to empower the brain. Their research interests include the following: asynchronous systems that can be controlled autonomously; generalised technologies that can be applied across different protocols, platforms, users, and in time periods; advanced algorithms that combine domain knowledge with deep learning; and the use of neurofeedback to treat brain diseases or improve learning ability. ‘By developing better technologies for BCIs, we hope to achieve seamless integration between humans and computers to enable bidirectional closed-loop control,’ says Prof Wan.