Multilingualism and the Brain’s Executive Functions

Are multilingual people smarter than those who understand only one language? Does learning multiple languages at a young age have a positive impact on brain development? In search of new insights to unravel these mysteries, the Centre for Cognitive and Brain Sciences (CCBS) at the University of Macau (UM) has launched a research project to establish a multilingual, multimodal, and multigroup surface‐based functional brain atlas. 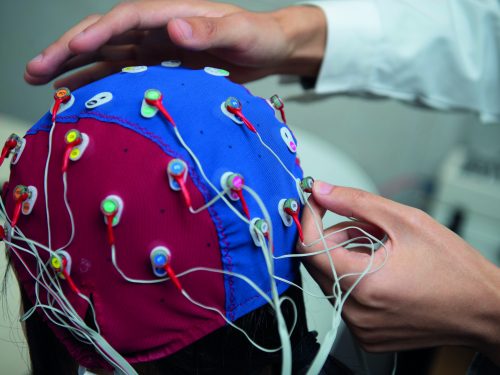 Prof Li Defeng, a member of CCBS and director of the Centre for Studies of Translation, Interpreting and Cognition in the Faculty of Arts and Humanities, is leading the research project titled ‘Executive Functions in Cross‐lingual Processing: A Neurocognitive Investigation’. He says intelligence refers to our cognitive abilities, including our ability to control our minds, emotions, and actions to achieve our goals. These kinds of high‐level cognitive abilities are called ‘executive functions’ (EF), without which one cannot think or act strategically. 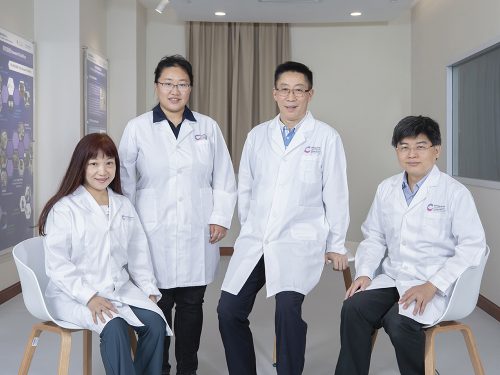 Researchers in the Center on the Developing Child at Harvard University describe executive functions as something ‘much like an air traffic control tower at a busy airport’ that handles multiple flights simultaneously by prioritising information from all directions. According to Prof Li, there are three main areas of EF. First, inhibitory control is the ability to override a thought to achieve a goal, such as eating less to stay healthy or sacrificing the fun of playing for learning. Secondly, working memory is the ability to temporarily store information to guide decisions and actions, such as remembering the question when solving a math problem. Finally, cognitive flexibility is the ability to adapt our behaviour and thinking to a changing environment, such as finding an alternative when you enter a restaurant and discover that it is fully booked. Developing these skills, which are not inborn but developed over time, is an important part of educating children and adolescents.

Is There a ‘Bilingual Advantage’?

Some studies suggest that people who speak different languages have better EF, including the ability to deal with information that contradicts their own perceptions. However, there is not yet conclusive evidence for this ‘bilingual advantage’ hypothesis. ‘Multilingualism obviously brings many advantages in learning, studying, living, and communicating with others,’ says Prof Li. ‘But the question is whether multilingualism in itself improves cognitive abilities. There is no consensus among scientists on this question, because many research results are contradictory and not very reproducible.’

According to Prof Li, many of the previous studies overlooked the impact of different levels of education and socio‐economic status on the development of EF. ‘Moreover, some studies only looked at one area of EF. It may be that multilingualism improves performance in one area but has no effect or even impairs it in another.’ says Prof Li.

Are there significant differences between the EF of multilingual people and those of people who speak only one language? If so, do the different ways of using languages (listening, speaking, reading, and writing) affect our EF differently? According to Huang Ruey‐Song, assistant professor in CCBS and the Faculty of Science and Technology, to find answers to these questions, researchers at UM are using functional magnetic resonance imaging (fMRI) and other techniques to create a multilingual, multimodal, and multigroup surface‐based functional brain atlas that will contain more than 1000 maps of the cerebral cortex.

‘Scientists around the world have already created many types of atlases of the brains of humans and other animals,’ says Prof Huang. These atlases, which consist of scans using various techniques, show the different activities and gene expression in brains, their structure, and the connections between brain regions. To create a brain atlas, scientists not only have to scan the brains of many subjects, but also perform precise image processing steps, including registration and averaging of maps across different brains.

‘Most existing brain atlases use volume‐based methods for cross‐subject averaging, but recent studies suggest that “surface‐based methods” can preserve more detail of cortical activation and connectivity between brain regions,’ says Prof Huang, who adds that the UM brain atlas will be created using some of the latest surface‐based mapping methods. 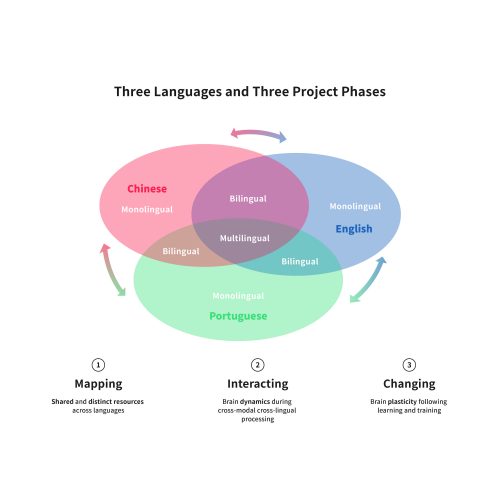 Why is Macao the right place for this research project? ‘The co-existence of different languages, cultures, and educational systems in the city allows us to easily recruit research participants from diverse linguistic and social backgrounds,’ says Victoria Lei, a member of CCBS and associate professor in the Department of English. While similar brain atlases have primarily captured English speakers, the UM research team will invite about 250 people to read, speak, listen, or provide simultaneous interpretation between Chinese (Cantonese and Mandarin), Portuguese, or English. When the research participants perform these language tasks, the researchers will scan their brains using an fMRI scanner and collect data on cognitive activity using eye‐tracking devices.

Using fMRI scans and data, the research team will be able to identify the neural representations and networks of different languages that are related to EF in the brains of monolingual, bilingual, and multilingual people. Researchers will also be able to analyse the activation of brain regions not directly related to language when people perform monolingual and multilingual processing tasks (such as simultaneous interpreting), as well as unimodal and multimodal tasks (such as reading and listening at the same time). In the later stage of this project, the team will also investigate whether language training affects the development of EF.

According to Prof Li, the UM Surface‐Based Brain Atlas Database, which will be accessible to scientists around the world, will provide fundamental data for cognitive and brain science research in various fields. He believes that the research findings from this project will lead to a deeper understanding of the cognitive and neural mechanisms of language control and provide useful leads for research in areas such as early childhood education, language teaching, translation training, and neurodegenerative disease prevention.