According to a national cross-sectional study published in 2020, the prevalence of dementia among people aged 60 and over in China is 6 per cent, with Alzheimer’s disease (AD) patients accounting for 3.9 per cent. In other words, there are 15.07 million people aged 60 and over in China who have dementia, of which 9.83 million are AD patients. As China’s population ages, the social and economic burden of AD will continue to increase. Despite the rising incidence, the development of AD drugs has been unsuccessful for decades. Although leading pharmaceutical companies invested more than USD 600 billion in AD research and drug development between 2000 and 2017, most of the drug developments have failed due to the unknown pathological mechanism of AD.

During the neuronal ageing process, damage to mitochondria, the ‘power plants’ within the cells, continue to accumulate, increasing the death of nerve cells. To ensure that mitochondria are in good condition, cells use mitophagy, a sophisticated quality control system, to selectively remove damaged mitochondria to maintain neuronal health. In our preliminary study, we found that damage to this system is key to the pathogenesis of AD. We have also found that stimulating mitochondrial phagocytosis can improve the pathology of animal models of AD and thus may be a promising new approach for the treatment of AD.

However, mitogenic inducers are currently scarce, and safe triggers are particularly lacking. Therefore, we need more effective ways to find such inducers and build a safer bank of drug candidates. At the University of Macau (UM), our team is working with the University of Oslo and Hangzhou Mindrank Technology Co Ltd to develop an artificial intelligence (AI)-based virtual screening algorithm that integrates molecular data in multiple dimensions. The algorithm and multi-species AD validation models for cell culture systems, nematodes, and mice have enabled us to identify several small-molecule compounds with therapeutic potential against AD. 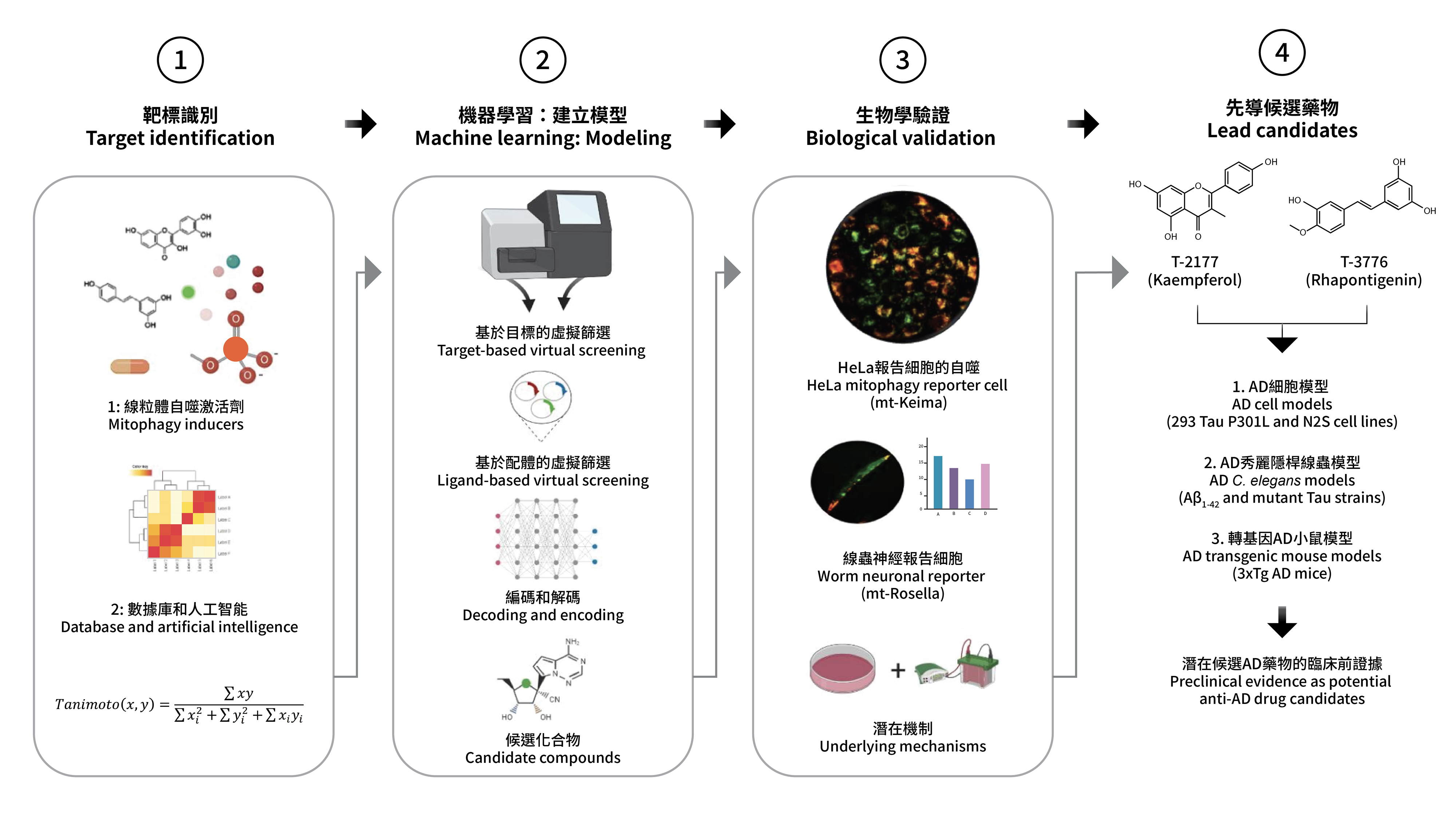 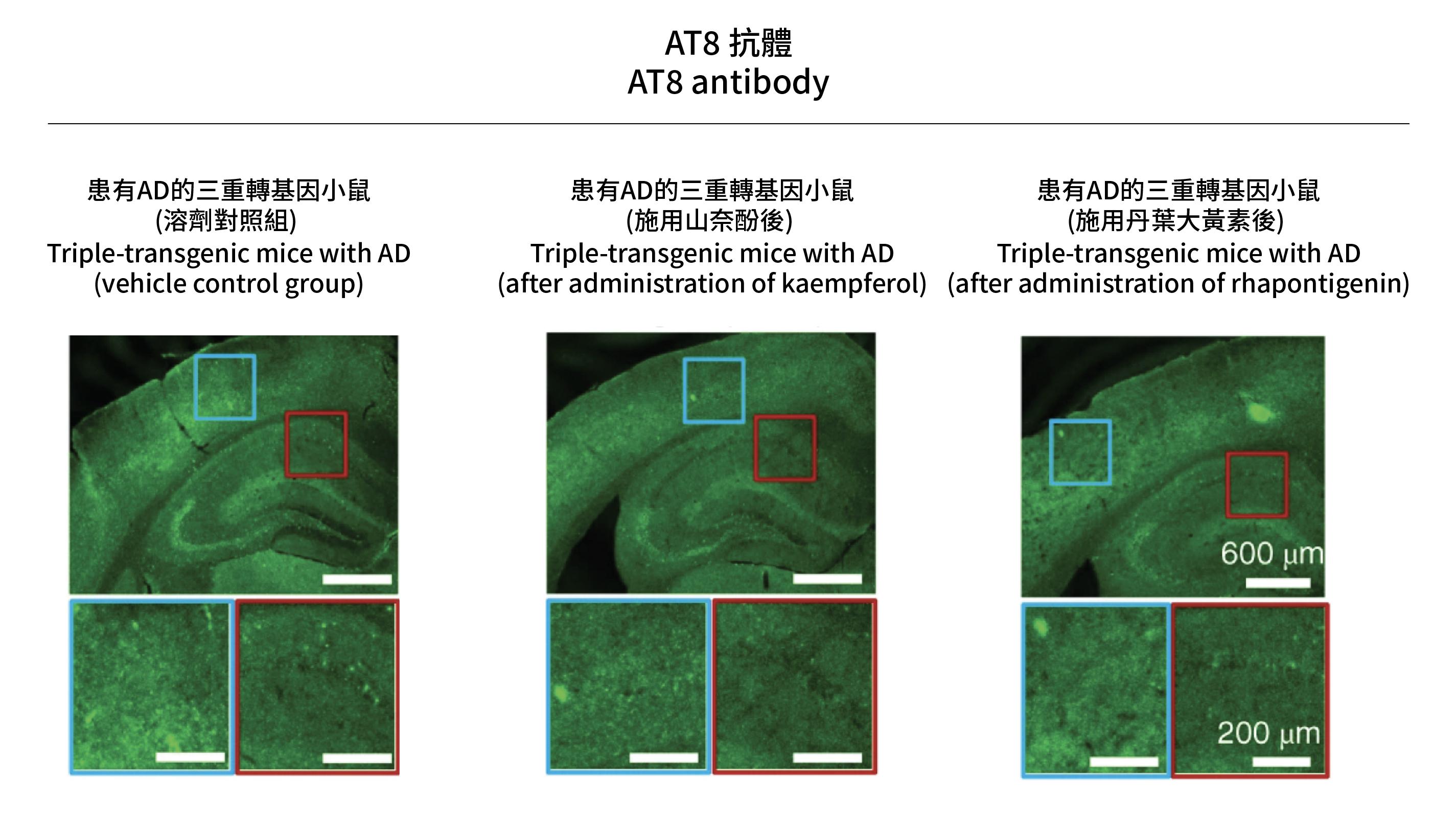 The researchers validated the capabilities of the two mitophagy inducers in triple-transgenic mice with AD. These immunofluorescence staining images show AT8-positive cells in the cortex and hippocampus of these mice. The magnified blue and red boxes show the designated brain regions.

Our team then used human HeLa cells, and nematode and mouse models, to validate the autophagy-inducing capacity of these molecules. The final two candidate molecules are kaempferol and rhodopsin tannoy. Both induce significant autophagy in the nervous systems of human cells, nematodes, and mice. More importantly, we found that kaempferol and rhodopsin tannoy have a significant positive effect on neurodegenerative changes in mice with AD. These changes include inhibition of AD pathology (aggregation of amyloid and microtubule-associated proteins) and improvement in learning and memory. This provides compelling new evidence for the activation of mitophagy as an AD therapeutic strategy. Nature Biomedical Engineering, one of the world’s leading academic journals, has published our research results online (https://doi.org/10.1038/s41551-021-00819-5). UM professor Lu Jiahong is a co-author and UM PhD student Zhuang Xuxu is a co-first author. 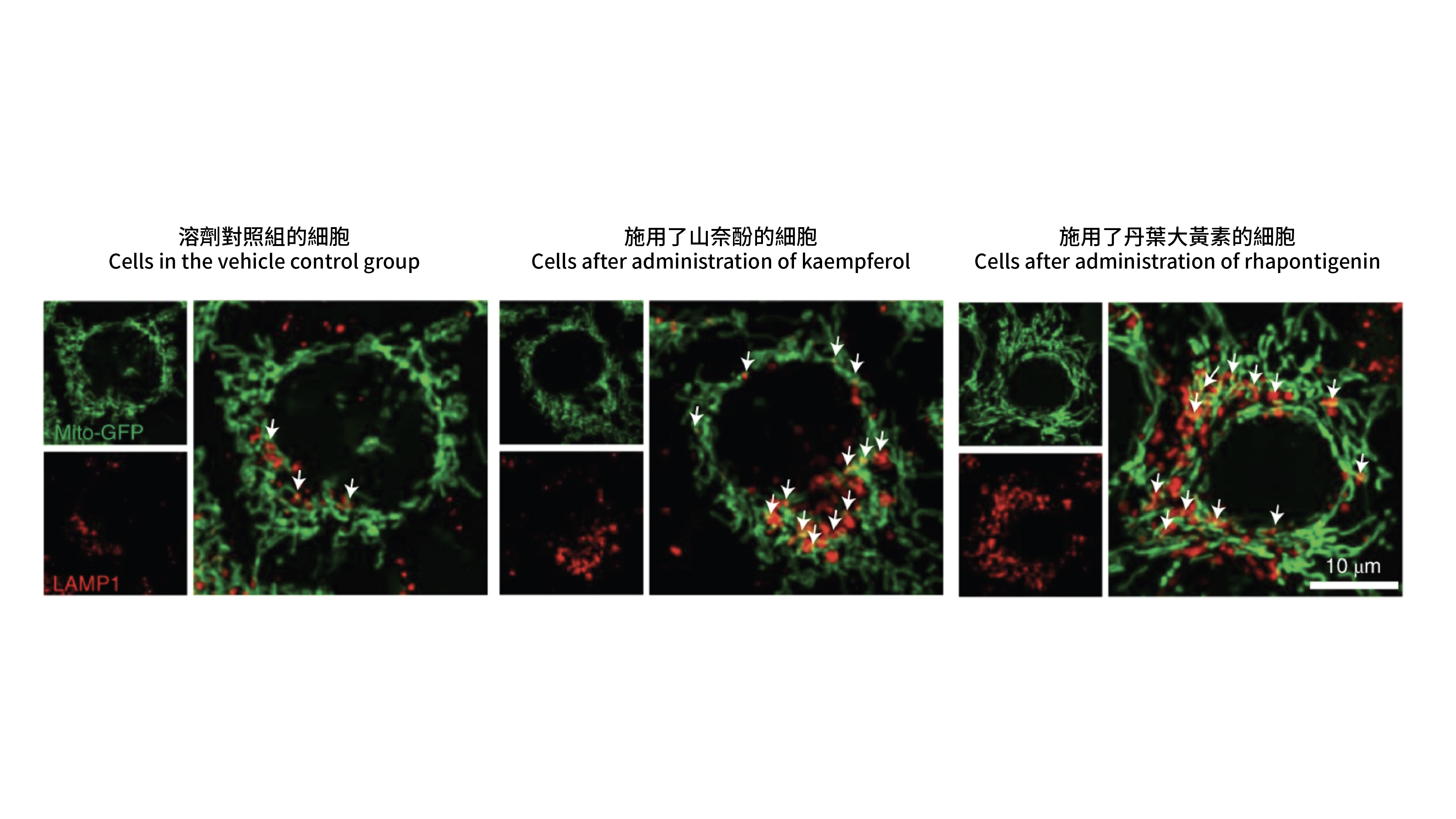 The researchers administered kaempferol and rhapontigenin (20 uM) to GFP-mito-mCherry-Parkin HeLa cells to validate their ability to induce mitophagy. The images show that 24 hours after administration of these two mitophagy inducers, co-localisation of mitochondria (Mito-GFP) and lysosomes (LAMP1 antibody) was enhanced in the two groups of cells, which had more mitophagy events (indicated by white arrows) than the same type of cells in the vehicle control group.

Modern drug development is a costly process that involves initial screening for biological activities and identification of lead compounds. This is followed by empirical drug design and synthesis of compounds by scientists, testing of compound activity by molecular biologists, and repeated optimisation and screening to identify clinical candidates. The entire process can often take a decade or two. However, less than 12 per cent of drugs in clinical trials receive approval from the US Food and Drug Administration (FDA).

Given the rich data available today, virtual drug screening using AI technologies is expected to replace traditional screening methods. This will not only speed up intermediate steps but will also significantly reduce R&D costs and increase the accuracy of screening. By combining AI-powered efficient and cost-effective screening in the first phase and traditional wet-lab validation on cells, nematodes, and mice in the second phase, we can improve the accuracy of screening and accelerate drug development. This approach can be applied not only to AD drug development but also to other areas of medical research.

Articles in the Academic Research column were submitted by UM scholars. The views expressed are solely those of the author(s). 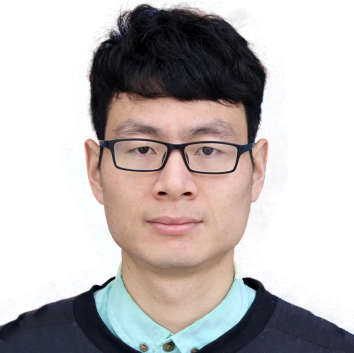 Zhuang Xuxu is a PhD student in the Institute of Chinese Medical Sciences (ICMS) of UM. His research interests include the regulation of autophagy which is mediated by the transcription factor EB, and the intervention in neurodegenerative diseases by activating autophagy through chemical or genetic means. He received his master’s degree from China Pharmaceutical University in 2016. He has published two papers as the first author (or as a co-first author) in journals including Nature Biomedical Engineering and Cell Death & Disease. 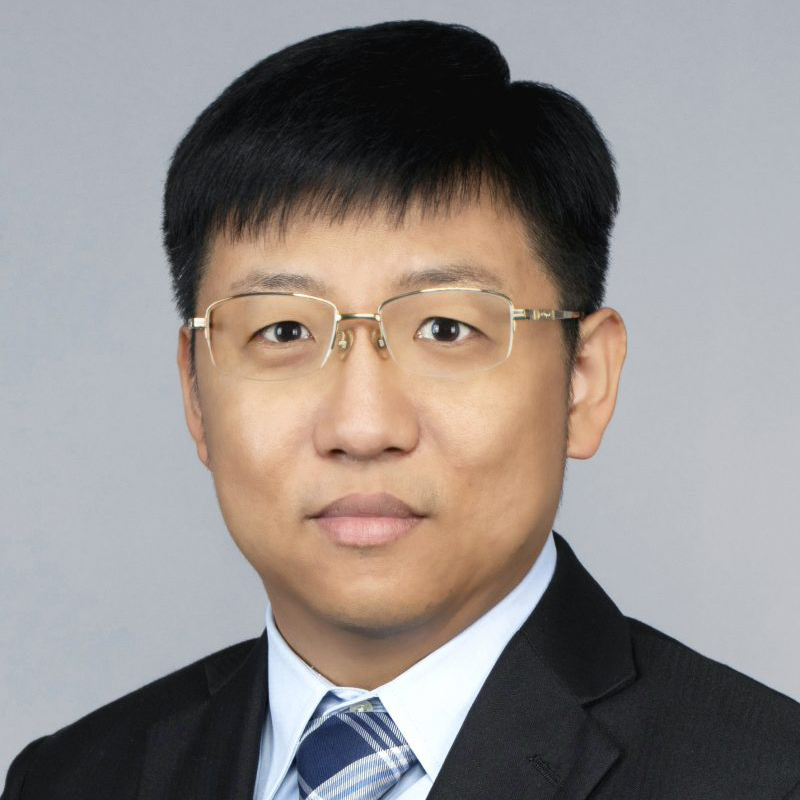 Lu Jiahong is an associate professor and programme director in the ICMS and the State Key Laboratory for Quality Research in Chinese Medicine (University of Macau). His team’s research interests include the role and mechanism of abnormal cell autophagy in neurodegenerative diseases, and the screening of small molecule autophagy modulators in Chinese medicinal products with therapeutic potential against neurodegenerative diseases for new drug development. Prof Lu has published over 100 papers in international journals, such as Nature Biomedical Engineering, Nature Communications, and Autophagy, with over 10,000 citations (Google Scholar data). He is in the process of applying for a number of patents.

Promoting the Transfer of Innovative Medical Research Results in Macao

Why Is the SARS-CoV-2 Delta Strain So Contagious?