If you have attended the courses of Jeremy De Chavez, assistant professor of the Department of English at the University of Macau (UM), you may be impressed by hearing him play his viola in class. Prof De Chavez is good at using audio and visual aids to help students engage more deeply with course content. Prof De Chavez says, ‘Teaching is telling a good story. If you can arouse wonder in students, it will cultivate a desire to learn.’

Growing up in Manila, the Philippines, a colony of Spain and then the United States since the 16th century, and occupied by Japan during World War II, Prof De Chavez was influenced by the country’s colonial culture. ‘My surname “De Chavez” is Spanish while my first name “Jeremy” is a rather common American name,’ he says. ‘My name is marked by the colonial legacy of the Philippines,’ says Prof De Chavez.

When De Chavez was young, he spoke English with his friends, and they watched American movies and listened to American pop music together. ‘My friends and I thought it was “cool” to speak English since it was so pervasive in the popular culture of the time,’ he says. The love for the language led him to fall in love with English literature. He admired the works of authors such as Edgar Allan Poe, especially liking his novel The Narrative of Arthur Gordon Pym of Nantucket. 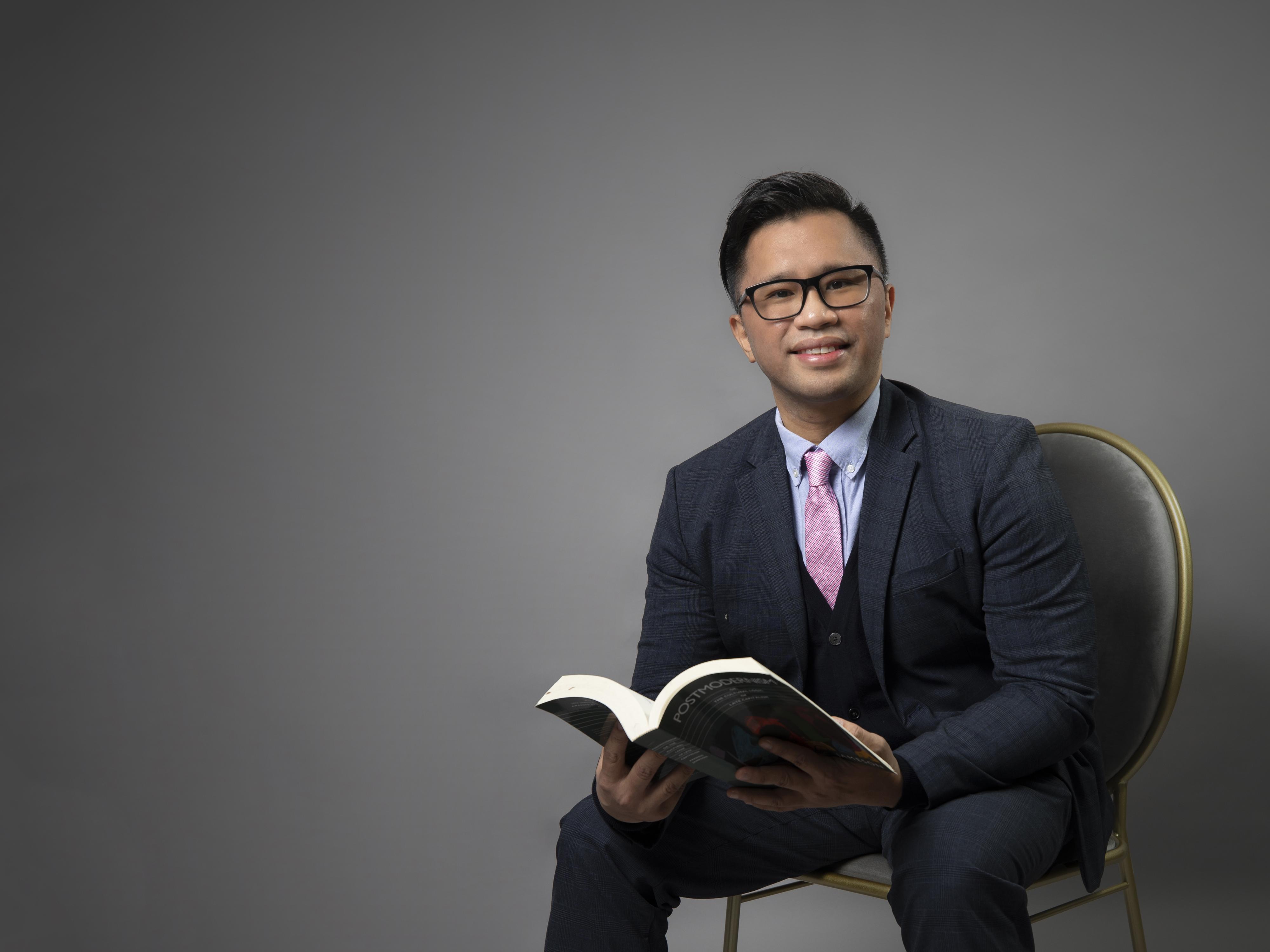 In high school, De Chavez often read English novels as he waited for his ride home from school. His English teacher, Ms Salve Regalado, noticed that and started regular afternoon chats with De Chavez about the books he was reading. At that time, De Chavez thought Ms Regalado just wanted to talk with him. Later, he realised her good intentions. ‘When I shared stories with Ms Regalado, I would observe her expression. When I noticed her interest waning, I would speed up the pace or just skip to the exciting parts. I would also adjust my tone. When she looked interested, I would try to amplify her interest. In other words, I was learning how to tell a story,’ he says. 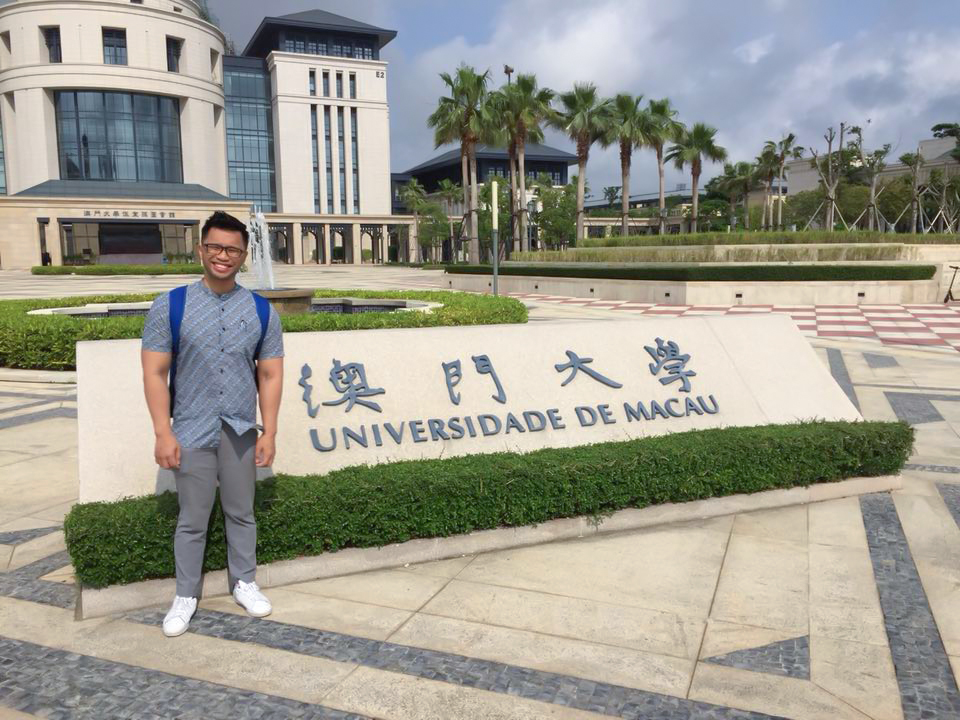 I strive to turn the classroom into a place hospitable to wonder,’ Prof De Chavez explains. ‘In saying this, I am also suggesting that educators in the humanities should be in the business of enchantment.’ He tries different teaching methods to make the learning process more engaging and enjoyable. In recognition of his outstanding teaching performance, Prof De Chavez received the Teaching Excellence Award for the 2020/2021 academic year from UM. When he learned that he won the award, he was both surprised and delighted. He says, ‘Receiving this award makes me feel that UM really values education in the humanities and social sciences.’ 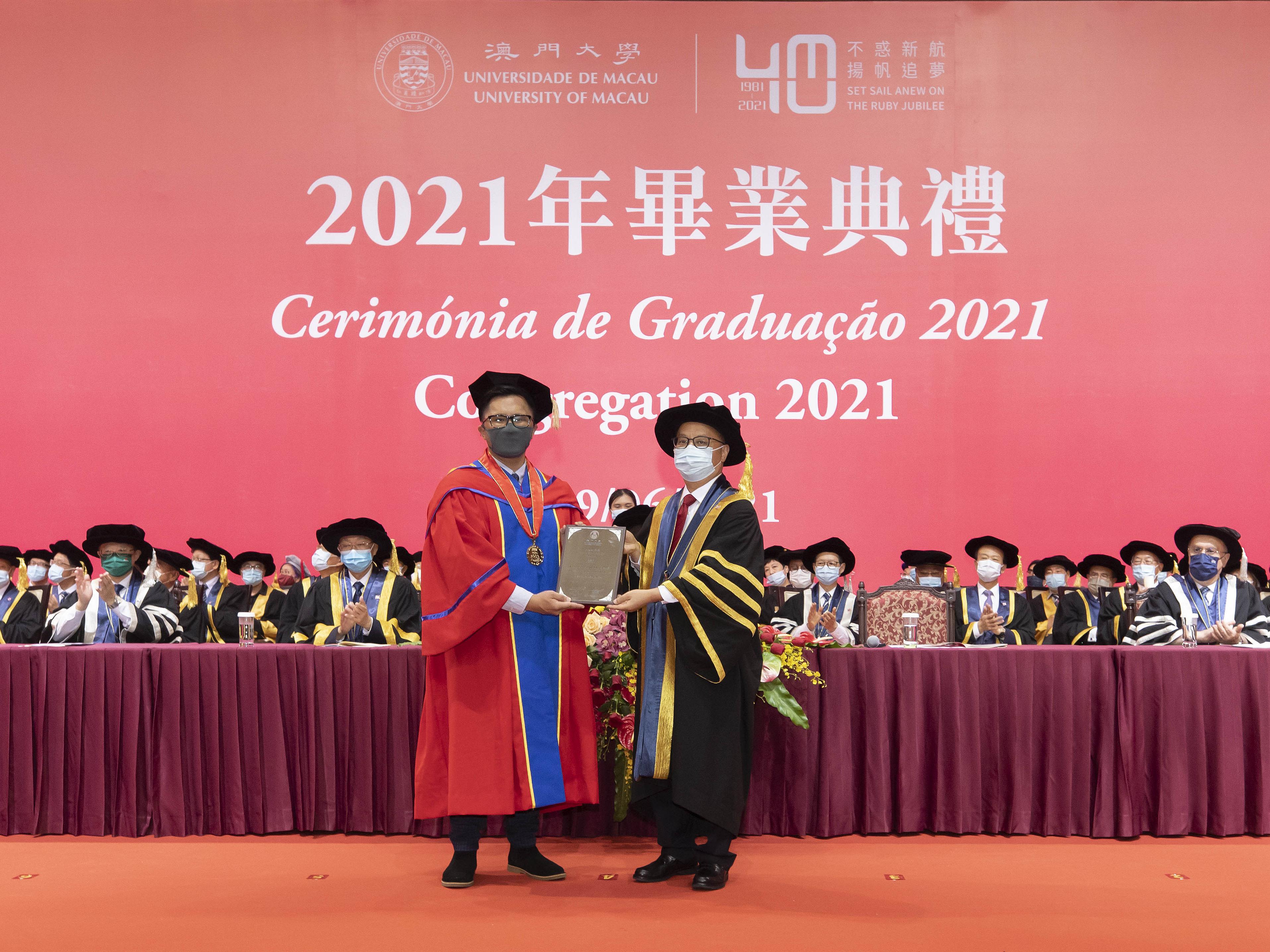 The programmes offered by the Department of English focus on the historical and contemporary role of English as a global medium in literature, language, and intercultural communication. ‘We help our students develop proficiency in the English language as we also cultivate their creative and critical thinking skills, so that they can meet the challenges in this fast-changing world,’ Prof De Chavez says.

Encouraging Students to Be Curious

‘If I could sum up my teaching philosophy in one word, that word would be “wonder”’, says Prof De Chavez. Students who have attended his classes said that they could feel his passion for teaching. For example, he always speaks in a dynamic and engaging tone, the way a good storyteller does. Prof De Chavez says: ‘I would always think about how to weave storytelling into my lesson plan in order to secure the attention of my students and arouse their curiosity.’

Prof De Chavez’s belief in the importance of wonder in the learning process stems from his own experience. When the film Jurassic Park was released in 1993, De Chavez, then a young boy and a dinosaur fanatic, was immediately captivated. He devoured all the dinosaur-related books in the library after school. ‘The movie inspired my passion for dinosaurs and I was very curious about everything related to them,’ he says. ‘It was wonder and curiosity that keep me learning.’ 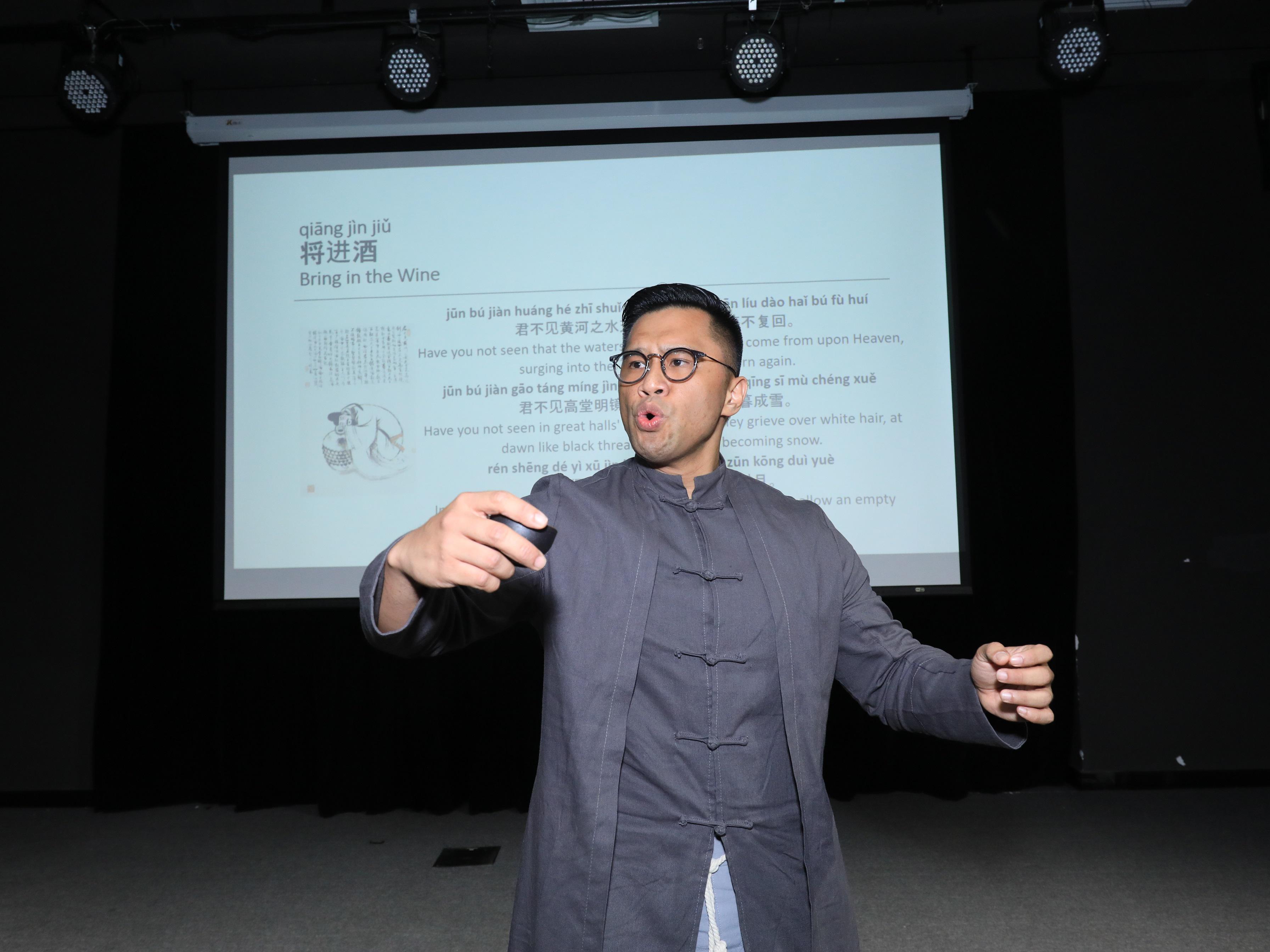 The parents of De Chavez encouraged him to learn Chinese when he was young. He enrolled in a Chinese language course and his teacher gave him a Chinese name ‘Lu Jie’, which was based on his English name. However, he found Chinese very difficult to learn, so he gave up after a short time. After coming to Macao, however, he realised that he needed to be able to speak at least a little Chinese in his daily life, which rekindled his interest in learning the language. So he enrolled in a Mandarin course offered by the UM Confucius Institute in the 2019/2020 academic year. By the time he completed the course, Prof De Chavez’s Chinese had improved greatly. At the graduation ceremony, he was able to recite Li Bai’s Do Drink Wine fluently. Prof De Chavez’s curiosity led him into the world of Chinese literature, and his motivation to learn has had an impact on his students.

Prof De Chavez’s research and teaching areas include affect studies, post-colonial studies, global Anglophone literature, and critical/cultural theory. He believes that affects plays an important role in literary studies. ‘There was a period in the history of literary criticism when a group of critics thought that how one felt towards a particular work had nothing to do with its legitimate or valid interpretation; that is to say, feelings and emotions are inconsequential, even detrimental, to literary interpretation—this idea usually goes by the name “affective fallacy”. Affect theory challenges this idea and argues for the importance of affects, emotions, and feelings,’ he explains. 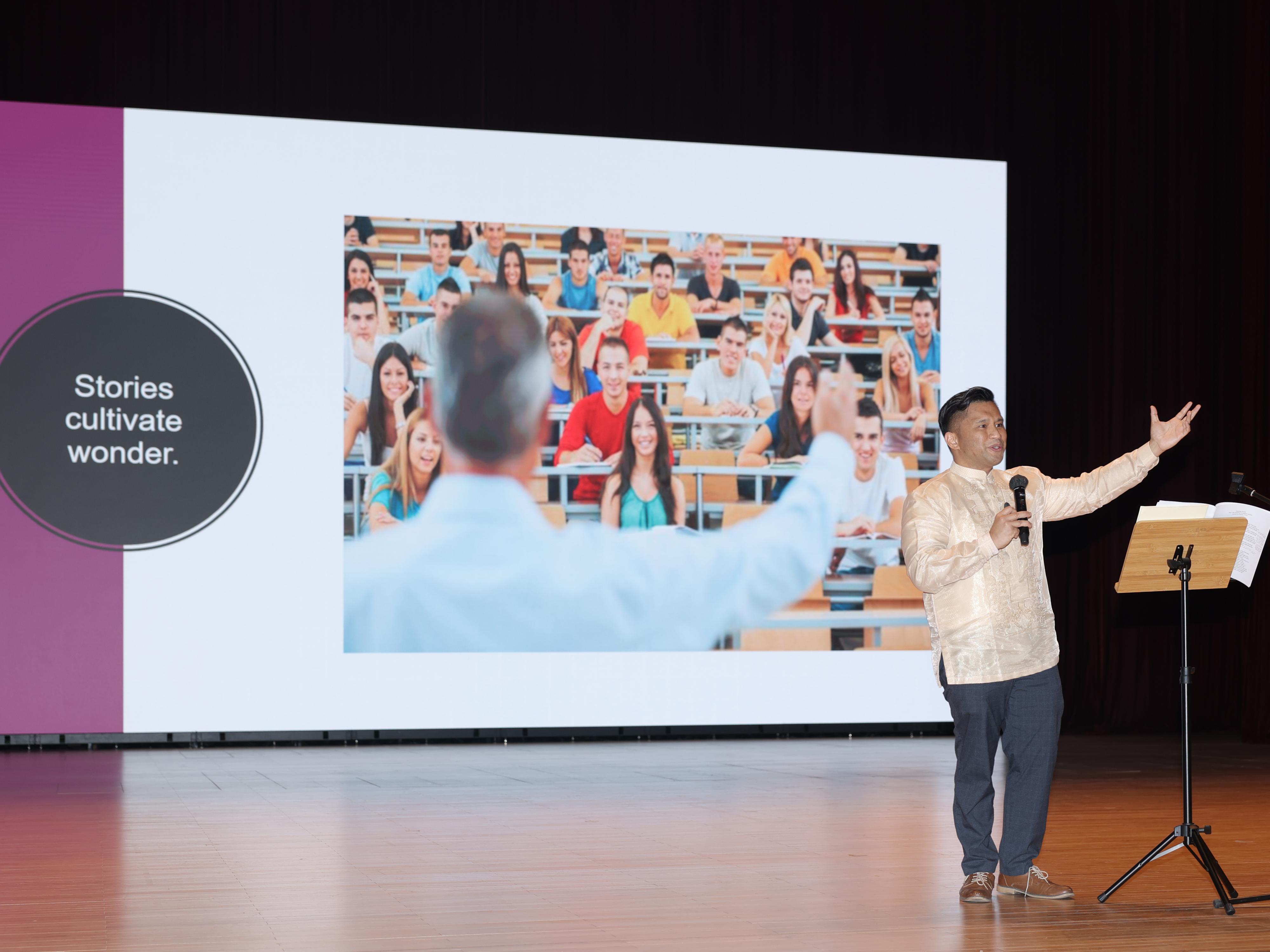 In addition to affect theory, Prof De Chavez also recently turned to the study of Gothic literature in the Philippines. He feels fortunate to be mentored by many outstanding scholars in the field who work at the university. ‘I believe UM is one of the best places in the world to study Gothic Literature,’ he says. ‘Many excellent scholars of the Gothic like Bill Hughes, Matthew Gibson, Nick Groom, and Damian Shaw are here! So, I can get the mentorship that I need to be a successful scholar in this field.’ Inspired by these colleagues, Prof De Chavez is editing a book on Philippine Gothic literature, Archipelagothic: Studies in the Philippine Gothic, which is the first book on this topic. It will be published in September 2022.

Prof De Chavez currently teaches an undergraduate course, ‘Introduction to Literary Criticism’, and a postgraduate course, ‘Critical Reading’. When he teaches English poetry-related content, he sometimes brings his viola to the classroom and uses music to elaborate on an idea. ‘When we listen to music, we know instantly whether we like it or not, so music is one of the most “accessible” forms of art,’ he says. ‘Different art forms can be placed in conversation with each other, so I try to use music to teach literature.’ 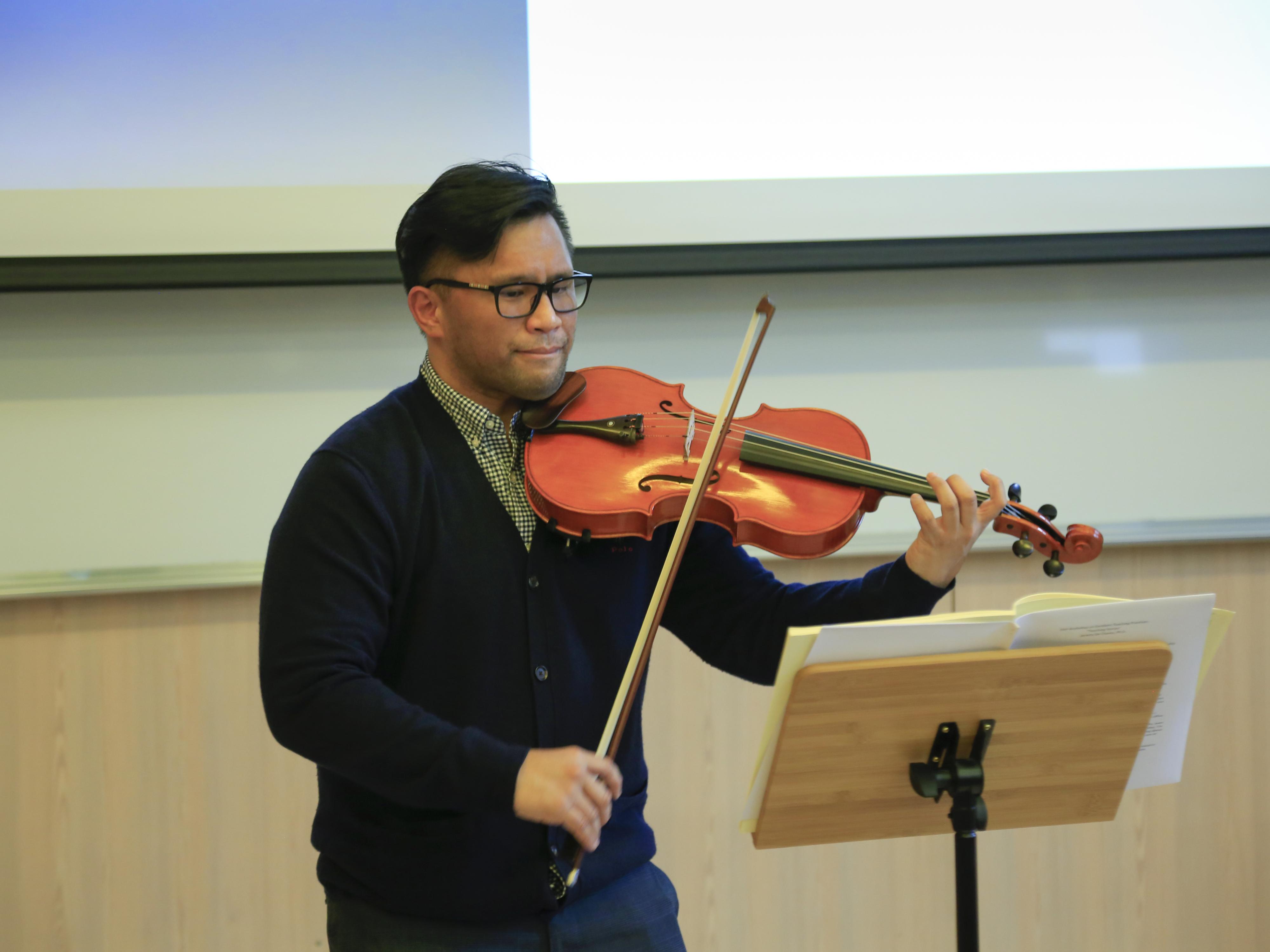 Prof De Chavez also teaches two general education courses, namely ‘Creativity and Writing: English for a Global Readership’ and ‘Sex and the Arts’. He has played a piece of Bach’s Cello Suite No 1 in G major (Sarabande) in one of his ‘Sex and the Arts’ classes to help his students get closer to the arts and feel the emotions expressed through the music. ‘To think outside the Bachs (box), that’s what I would like my students to learn,’ he explains.