Skip to content
Wang Qingjie on Philosophy and Life

What is philosophy? What do philosophers study? What qualities do philosophers share? In this article, Prof Wang Qingjie, head of the Department of Philosophy and Religious Studies at the University of Macau (UM), shares his answers to these questions.

Studying Philosophy for Over 40 Years

Prof Wang’s office is located on the fourth floor of the Faculty of Arts and Humanities (FAH) building. Inside his office, there is a computer desk, a small end table, and several chairs weighed down with piles of books. On one wall hangs a painting of the famous Chinese philosopher Laozi riding a black-green buffalo into the west. It appears to be a perfect setting for interviewing a modern philosopher. 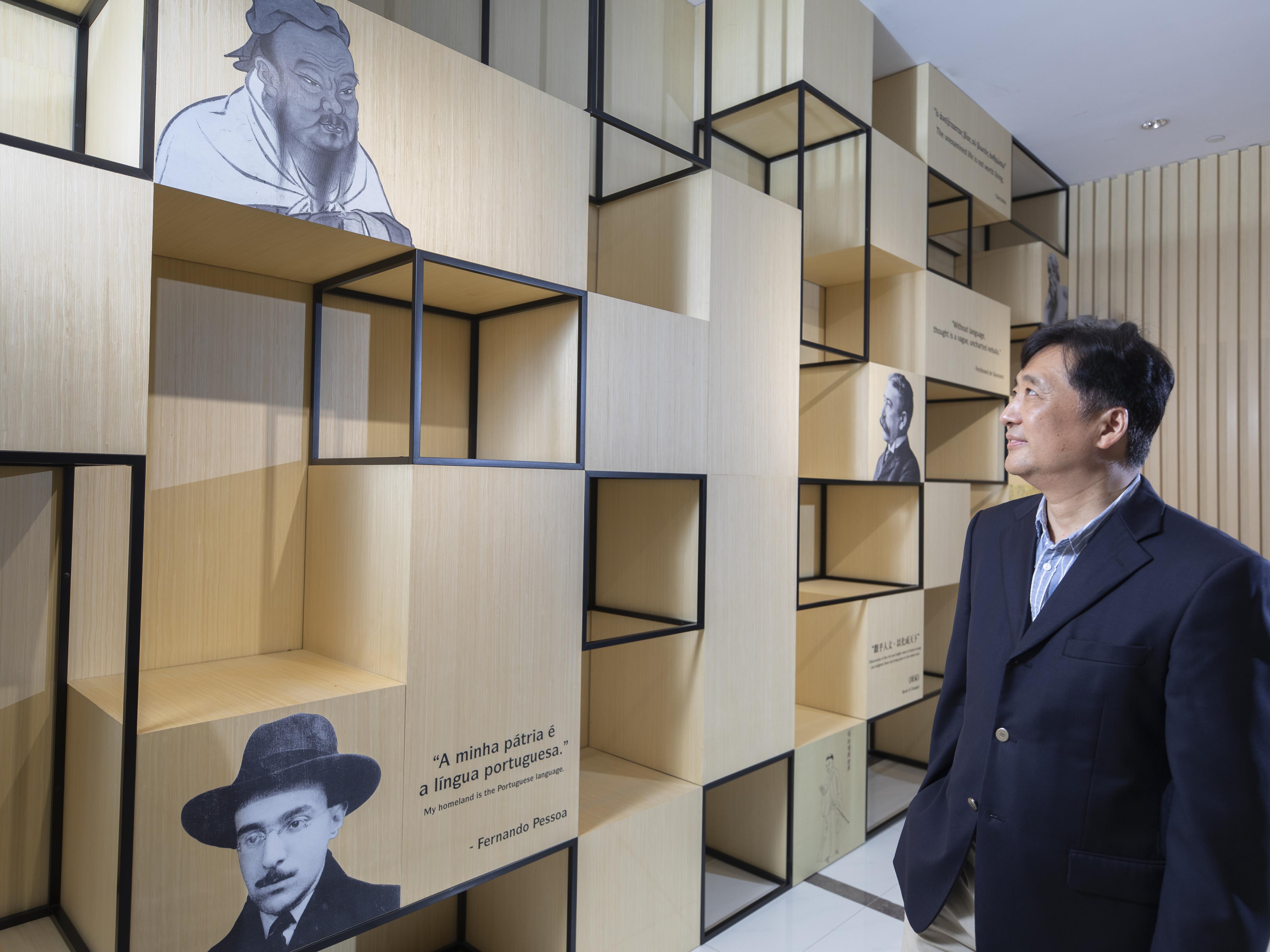 Prof Wang took China’s national college entrance examination in 1977 and was admitted to the philosophy department of Nanjing University in early 1978, becoming a member of the first batch of university students after the Cultural Revolution. Asked about his introduction to the world of philosophy, he says, ‘There are many paths in life, but often you don’t choose them consciously. To borrow Heidegger’s words, you are often “thrown” into the world. My introduction to philosophy is probably one of those “thrown” situations in life.’

During his university years, constraints on freedom of thought began to be lifted, and different schools of Western thought flooded into China, creating an enormous impact on society. Having studied German since his childhood, Wang began to read the original works of some German philosophers and was deeply influenced by their ideas. After graduating from college, he went on to study a postgraduate programme in the Department of Philosophy at Peking University and earned a PhD in philosophy from Tulane University in the United States later. He studied and taught philosophy in the US for more than 13 years before returning to China in 2000 to teach at the Chinese University of Hong Kong. In 2019, he joined UM. ‘It is said that it takes at least 10,000 hours of learning and practice to achieve mastery in a field. I think I have far passed that mark after having spent over 40 years in the field,’ says Prof Wang. 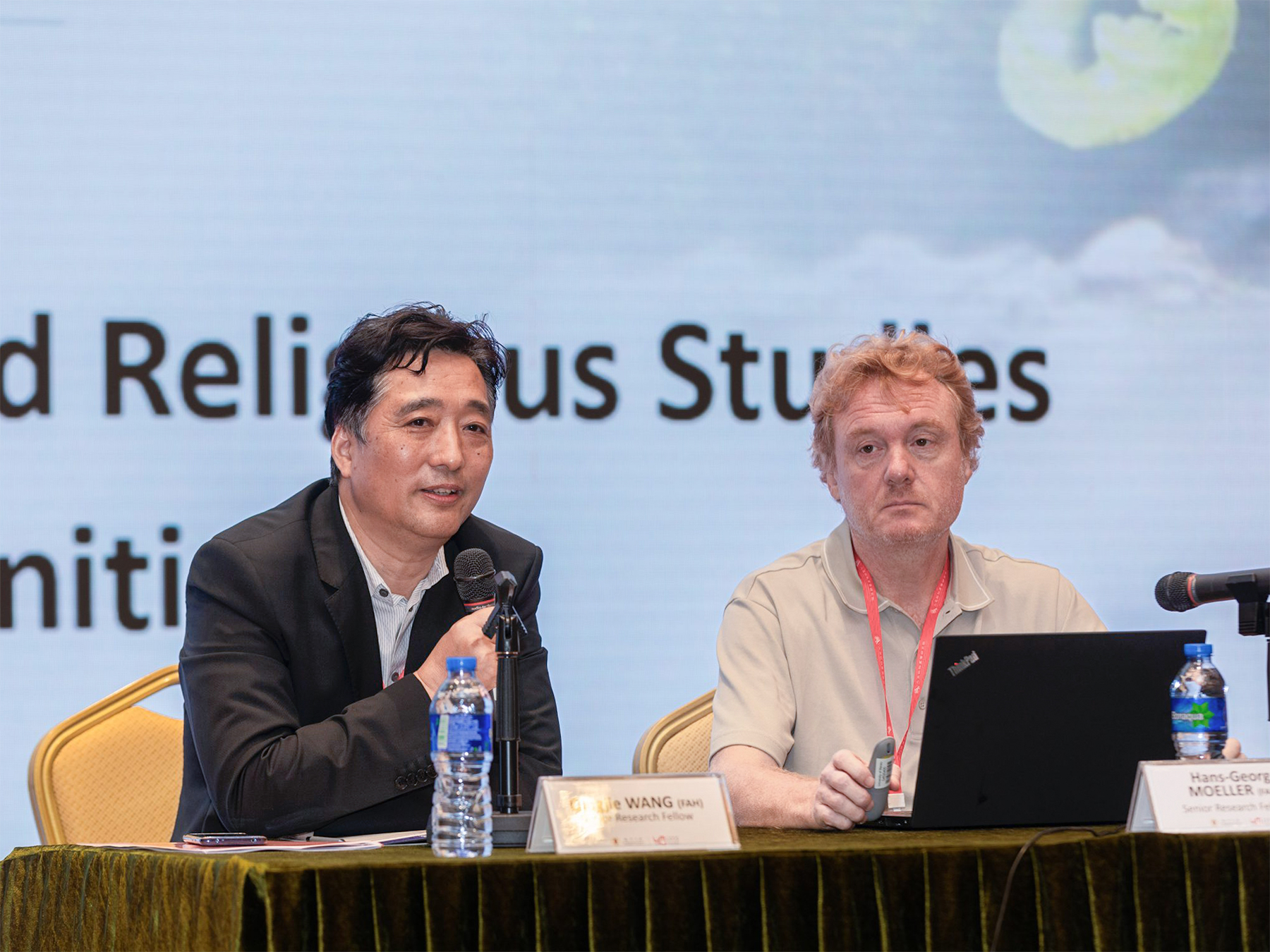 Over the years, Prof Wang has focused on contemporary Western philosophy, particularly German phenomenology, East-West comparative philosophy, as well as ethics and moral philosophy. Books he authored or edited recently include From Dasein to Ereignis-Heidegger’s Way of Thinking (2020); Moral Affection and Confucian Exemplary Ethics of Virtue (2016), Heidegger and Beginning of Philosophy (2015), Heidegger: Translation, Interpretation and Understanding (2017), and Virtue, Law and Their Traditions in China (2019). He has also translated some contemporary Western philosophical classics from German into Chinese, such as A New Translation of Einfuehrung in die Metaphysik (2017) and Kant und das Problem der Metaphysik (2012). He was the co-translator of Heidegger’s Sein und Zeit (1987). In recent years, he co-edited the Chinese version of Major Works of Martin Heidegger (30 volumes) (2018). 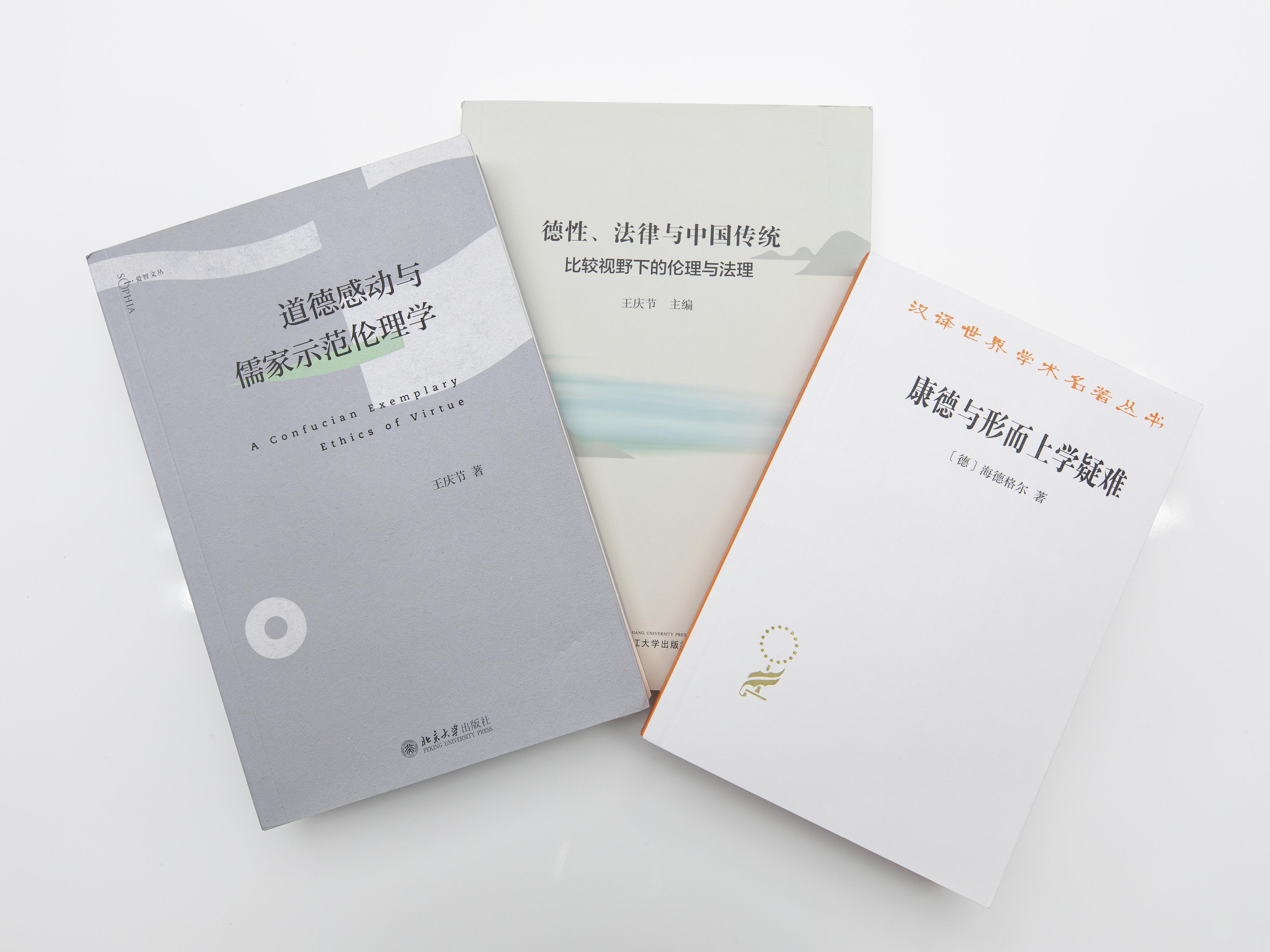 Some works by Prof Wang Qingjie

Phenomenology is the starting point in Prof Wang’s study of Western philosophy. In recent years, his research has focused more on comparative philosophy and Eastern and Western theories of ethics. For example, in his book Moral Affection and Confucian Exemplary Ethics of Virtue, he combines the main concepts, principles, and theoretical frameworks of Chinese and Western moral philosophy to reinterpret the relevance of Confucianism to modern society.

Some scholars believe that Prof Wang’s theory of ‘moral affection’, which serves as the philosophical foundation of Confucian ethics, is of great significance to the development of contemporary emotionalist ethics and Confucian ethics. ‘In our lives, we will encounter various challenges, which we can use for discussion and explore their new philosophical meanings,’ says Prof Wang. ‘For example, the commonly used Chinese word “being morally moved”, or “affection”, has rarely been analysed or discussed philosophically, when in fact it may be a very important concept in Chinese philosophy. Another example is the moral dilemma posed by the well-known Confucius debate on “kin concealment”, which not only has relevance to moral judgments and judicial practices in our daily lives, but also involves Confucius’s philosophical reflection on the complexity of human moral nature. These moral dilemmas should be found in both West and East, in both ancient and modern times, and they keep driving us to think and to live more deeply and critically. We can explore them by comparing Chinese and Western moral metaphysics, and then propose different explanations, which is also why I study comparative philosophy.’

The word ‘philosophy’ is made up of two ancient Greek words: ‘philia’ and ‘sophia’, which originally meant ‘love’ and ‘wisdom’. Prof Wang is often asked by his students: ‘What is philosophy?’ He always replies, ‘Philosophy as love of wisdom is not only a love of any kind of knowledge, but also a search for the foundation of all knowledge and values. More importantly, it focuses more on “love” than on “wisdom” or “knowledge”. This “love” is the original motivation for scientific criticism and innovation.’ 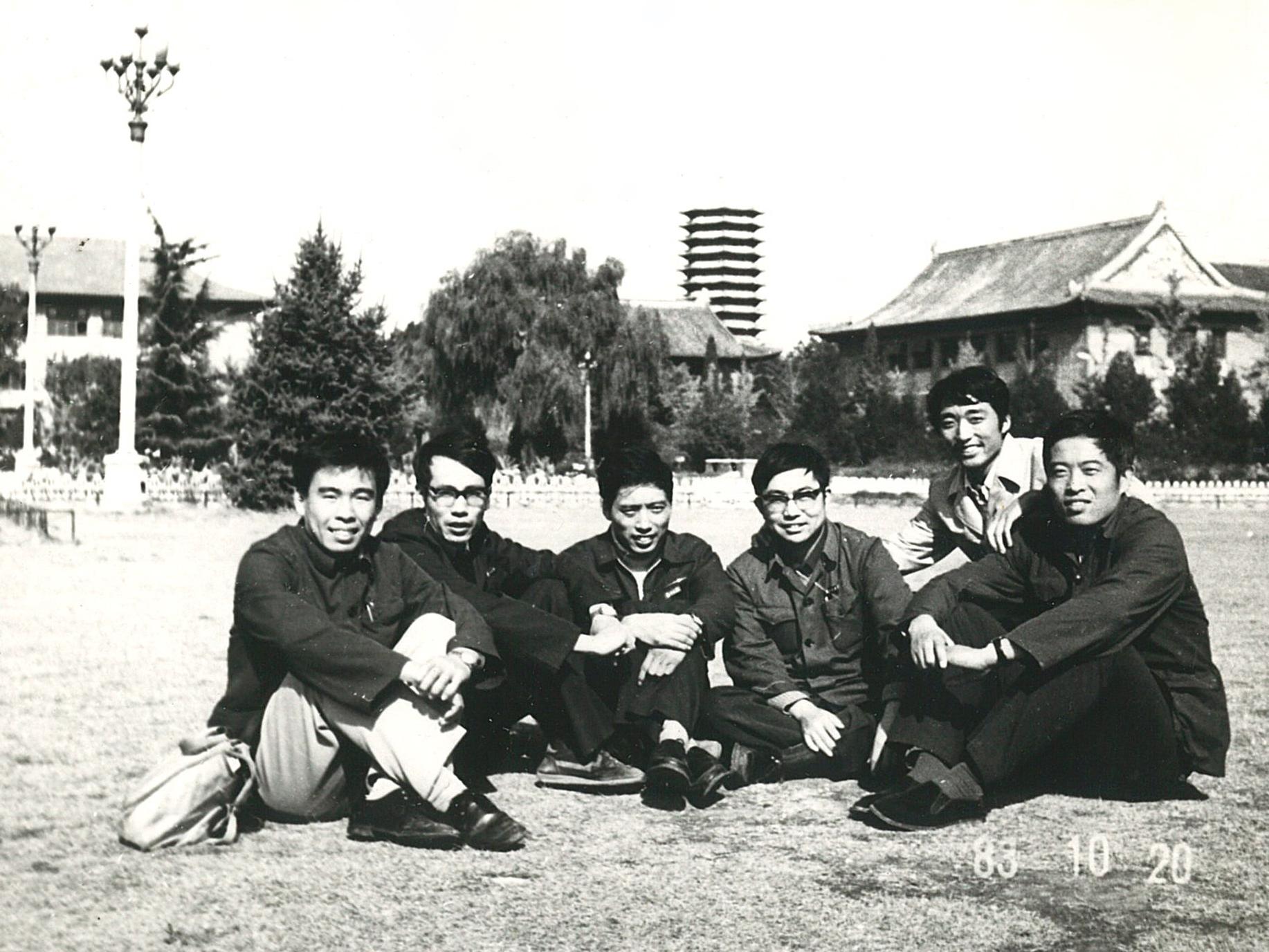 Wang Qingjie (2nd from right), with his friends at Peking University, taken when he was studying a postgraduate programme in the Department of Philosophy.

According to Prof Wang, philosophy has much closer relevance to our daily lives than we realise. ‘The teachings and the wisdom of those greatest philosophers, such as Confucius, Laozi, and Buddha in the East, and Plato and Aristotle in the West, are so profound,’ he says. ‘These old texts have existed for more than 2,000 years, and they are still widely read and never cease to inspire. This is itself a miracle, and it proves that philosophy is needed in modern life. To put it into perspective, how many texts written by contemporary author will continue to be read 10 or 20 years from now? Not too many I’m afraid, no matter how popular they are now. The teachings of those great philosophers are the gem of the collective cultural heritage of mankind. Of course, there is inevitably historical, linguistic, and cultural distance that makes them very difficult for us to learn today, and that is why we need to have a department of philosophy.’ 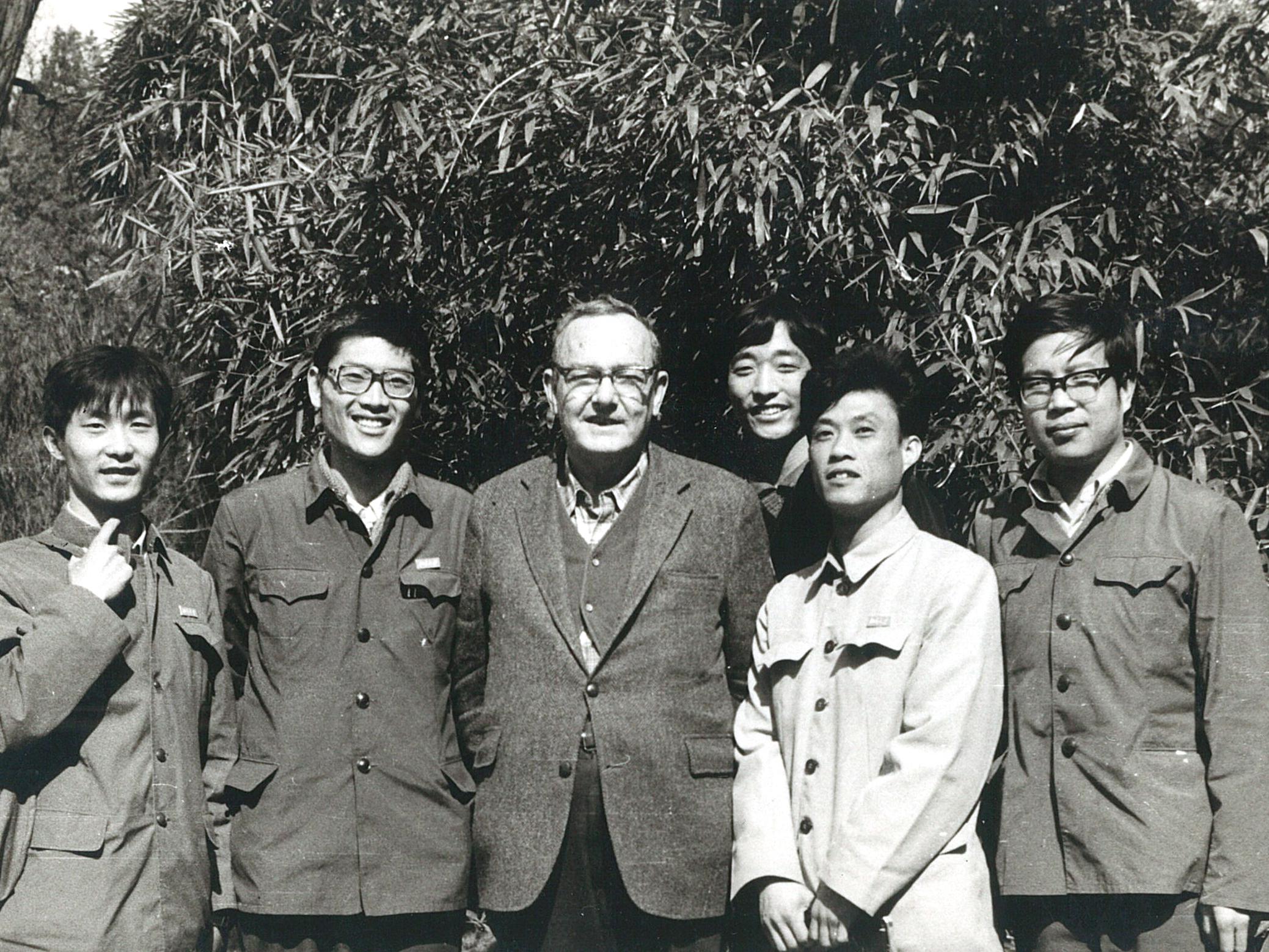 Prof Wang says: ‘Philosophy teaches not only knowledge, but more importantly, different ways of thinking and an independent attitude towards life. Students of philosophy are more likely to have qualities that make them stand out from a crowd because they are trained to think and act more rationally, creatively, critically, and reflectively. Most importantly, they tend to seek a unique and independent understanding of life itself, and they also tend to maintain critical thinking. Every educated person needs to have a certain degree of philosophical literacy. More and more people are beginning to realise the importance of philosophy to their future life, and a good education in philosophy could provide learning and necessary training for future generations in the coming new age.’ 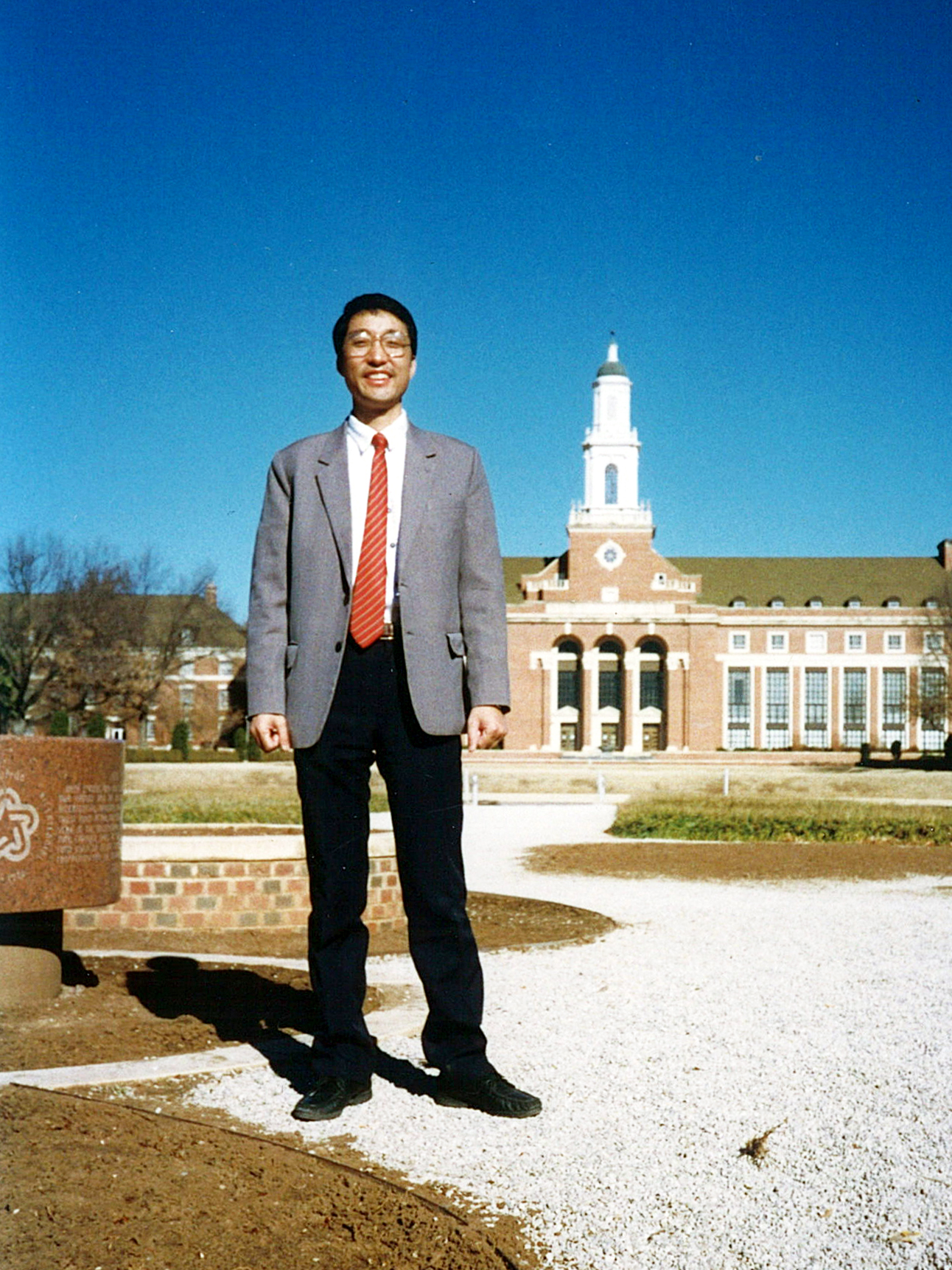 Wang Qingjie (3rd from right), his fellow students at Peking University and Herbert Simon (3rd from left), an influential scientist who won the Turing Award and the Nobel Prize in Economics.

Prof Wang joined UM in 2019 as the head of the Department of Philosophy and Religious Studies. In 2021, he took on the new role as the associate dean of the FAH. He says the FAH has a strong faculty team that has achieved excellence in a variety of fields. ‘Take the Department of Philosophy and Religious Studies for example. The department mainly focuses on East-West comparative philosophy, the history of Western philosophy, Chinese philosophy, philosophy of religion, and socio-political philosophy,’ says Prof Wang. ‘Compared to similar departments in Macao’s surrounding regions, our team is relatively small but very strong, with a good mix of Eastern and Western scholars and teaching experience.’

Macao has historically been a port connecting the East and the West. Over 400 years ago, the Jesuits arrived in mainland China via Macao, promoting East-West integration and interaction in culture, science, philosophy, and religion. Prof Wang researched once on the history of Western translation of Confucianism , and he told us that the name ‘Confucius’ was actually brought to the West through Macao. ‘I hope that with the expansion of our faculty team, Macao will become more of an “exporter”, rather than merely a “importer”, of philosophy and philosophical ideas,’ he says. 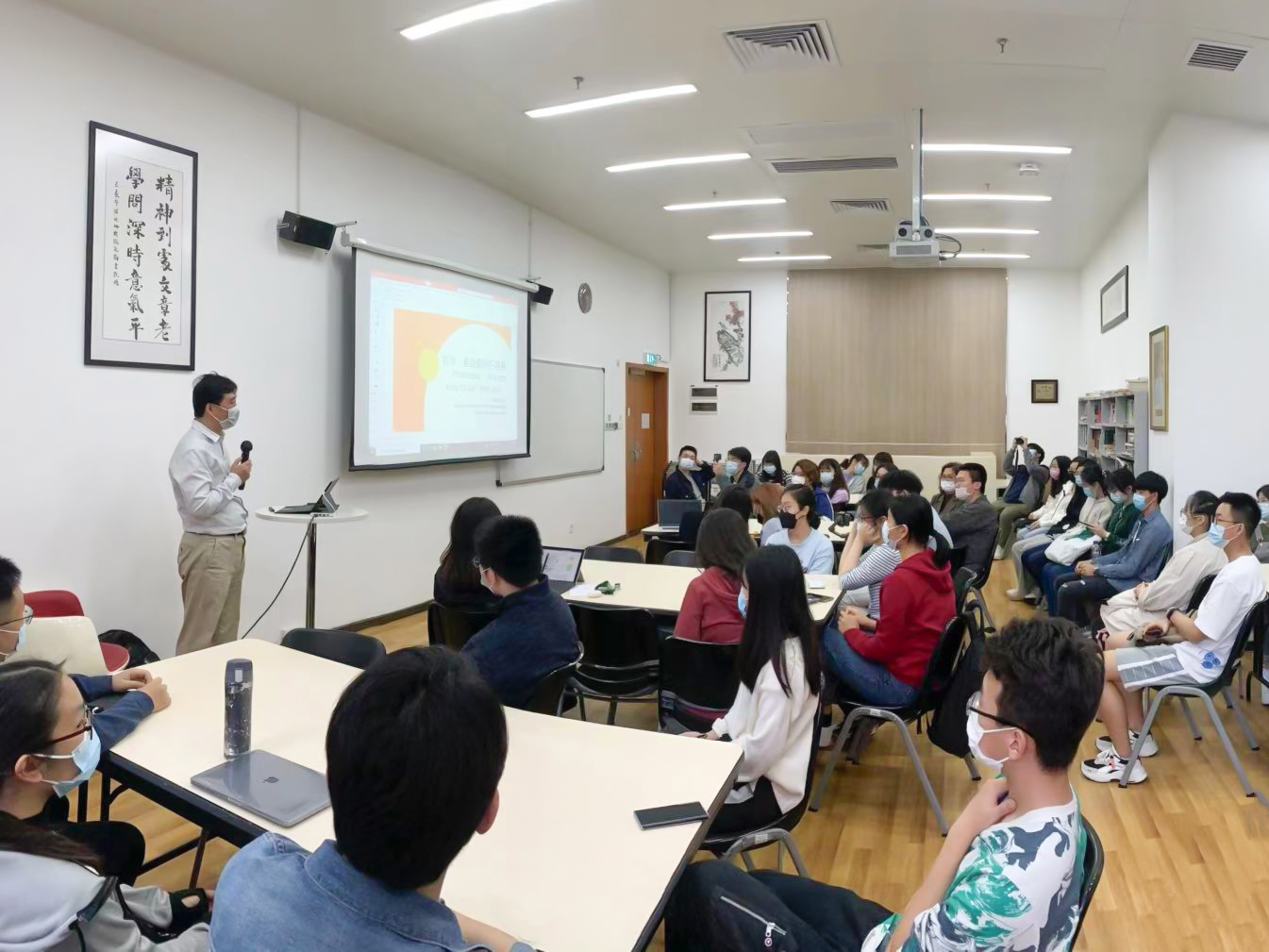 Prof Wang also hopes to encourage more students to study philosophy. He says: ‘I hope that philosophy will achieve broader impacts in Macao, and will become more attractive and appealing to young people in the future.’