reflecting on the various social issues that emerged during this period remains an important task for many social scientists. Within the criminological community, many scholars are studying the impact of the epidemic on crime and its governance. At the beginning of the pandemic, lockdowns and home quarantines were imposed in many parts of the world. Most places experienced a drop in overall crime rates during periods of lockdown since human mobility was restricted, which largely reduced the incidence of physical crimes. Some types of crime associated with the outbreak, however, showed an upward trend, such as mask‑related fraud, domestic violence due to home isolation, and hate crimes against Asians in some Western countries.

In the early days of the COVID‑19 outbreak, my research team and I discovered many crime problems arising from the outbreak, such as mask fraud, excessive law enforcement, the impact of the outbreak on overall crime rates, and discrimination and hate crimes. One of the studies we conducted, titled ‘Stigma, Discrimination, and Hate Crimes in Chinese‑Speaking World amid Covid‑19 Pandemic’, was published in the Asian Journal of Criminology in early 2021. In this study, we explored the phenomena of stigma, discrimination, and hate crimes against different groups in Chinese‑speaking societies and analysed the causes from three dimensions: psychological fear at the individual level, racial discrimination at the social level, and geopolitical tensions between different countries and regions.

In our study, we found that the stigmatised and discriminated groups in mainland China gradually shifted from the people from Wuhan/Hubei in the early stages to foreigners, particularly Africans. In other areas of the world, the focus of discrimination expanded from Chinese nationals towards people of Asian descent. Behind this discrimination lies the fear of contracting this unknown and highly contagious virus, and the search for a ‘scapegoat’ has become a common psychological response. Although such behaviour is immoral, this phenomenon is typical of most societies. Unfortunately, history repeats itself since such patterns can be found throughout the history of civilisation. If similar plagues occur in the future, certain populations may likely be stigmatised or discriminated against again.

When stigma, discrimination, and violence occur between different races, the fear of infection is no longer the sole motivation; racial prejudices also play a significant role. The short‑lived discrimination against Africans in Guangzhou, China, and the ongoing discrimination against Asians in the United States are manifestations of resurging racism during the pandemic. Varying degrees of racial prejudices exist in most societies. Under normal circumstances, such prejudices may not be pronounced. However, racism becomes apparent if there is a specific triggering time and event, and in this case, the COVID‑19 pandemic was the trigger mechanism.

Since individual discrimination and hate crimes often do not occur in a vacuum, political and ideological conflicts between countries and regions should not be neglected. The discrimination against mainland Chinese in Hong Kong and Taiwan, and against Asians in the US were fuelled by pre‑existing political and ideological conflicts. We found that before the WHO officially named the virus COVID‑19, the stigmatised name ‘Wuhan pneumonia’ was used in many regions. However, after the WHO name designation, no media in Macao used ‘Wuhan pneumonia’, while in Hong Kong, Taiwan, and overseas Chinese media, it is still used to this day. The labelling of the virus reflects the harmonious relations between mainland China and Macao and the relatively tense relationships with Hong Kong and Taiwan. In the US, political factors still influence the population’s perception of China and the pandemic even after the Trump administration. Recently, the Biden administration has introduced the COVID‑19 Hate Crimes Act to combat violent crimes and discrimination against Asians. Nonetheless, the problem of hate crimes will likely not be solved anytime soon, because the hatred motivating those offenders can be seen as a reflection of the escalating political tensions between the US and China.

The COVID‑19 pandemic is the most significant global event since World War II. Different academic disciplines are assessing the impact of the pandemic on all aspects of social life from a variety of perspectives. Criminologists are not only studying the impact of the pandemic on crimes but also on the means of crime control. As humanity lives in an era of increasing surveillance and self‑monitoring, how did the COVID‑19 pandemic accelerate this process in a world that is moving toward what some scholars call ‘surveillance capitalism’? From lockdowns to vaccinations, governments around the world have gone to great lengths to control the pandemic. Some populations will comply, while others may directly or indirectly challenge these measures. What factors contribute to the coping strategies of different populations and how did this pandemic renew our understanding of the relationship between the state and society? These are the questions my research team and I are trying to address; we hope to share more findings with you in the future. 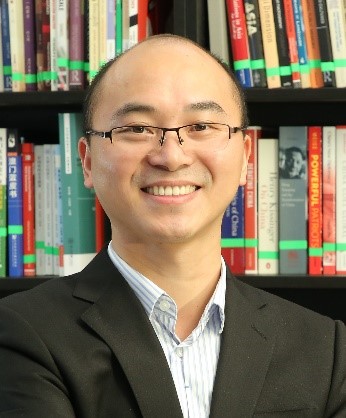 Xu Jianhua is an associate professor and head of the Department of Sociology at UM. His research interests include the sociology of crime and deviance, policing, victimology, urban sociology, and Macao studies.
ISSUE24 | 2021