Skip to content
Unleashing the Power of AI on Self‑driving

Once only visible in science fiction films, self‑driving cars roaming streets in futuristic cities may enter your car park sooner than you think. To advance the technology behind such cars, the University of Macau (UM) and its partners from Macao and mainland China are conducting a major research project. Together, they have launched Macao’s first‑ever self‑driving bus as a testing vehicle at the university.

Tests Underway on an Unmanned Bus

The self‑driving bus hit the road in October 2020. It has eight seats, allows six standees, and can travel up to 40 km per hour. Its launch is part of the ‘Key Technologies and Platforms for Collaborative Intelligence‐driven Autonomous Vehicles’ project, which has been supported by the Macao Science and Technology Development Fund since 2019. The researchers come from the State Key Laboratory of Internet of Things for Smart City (University of Macau), the Shenzhen Institutes of Advanced Technology (SIAT) under the Chinese Academy of Sciences, the National University of Defense Technology, Baidu, and Shenzhen Haylion Technologies. Macao’s telecommunications service provider CTM provides mobile network technology to support the project. 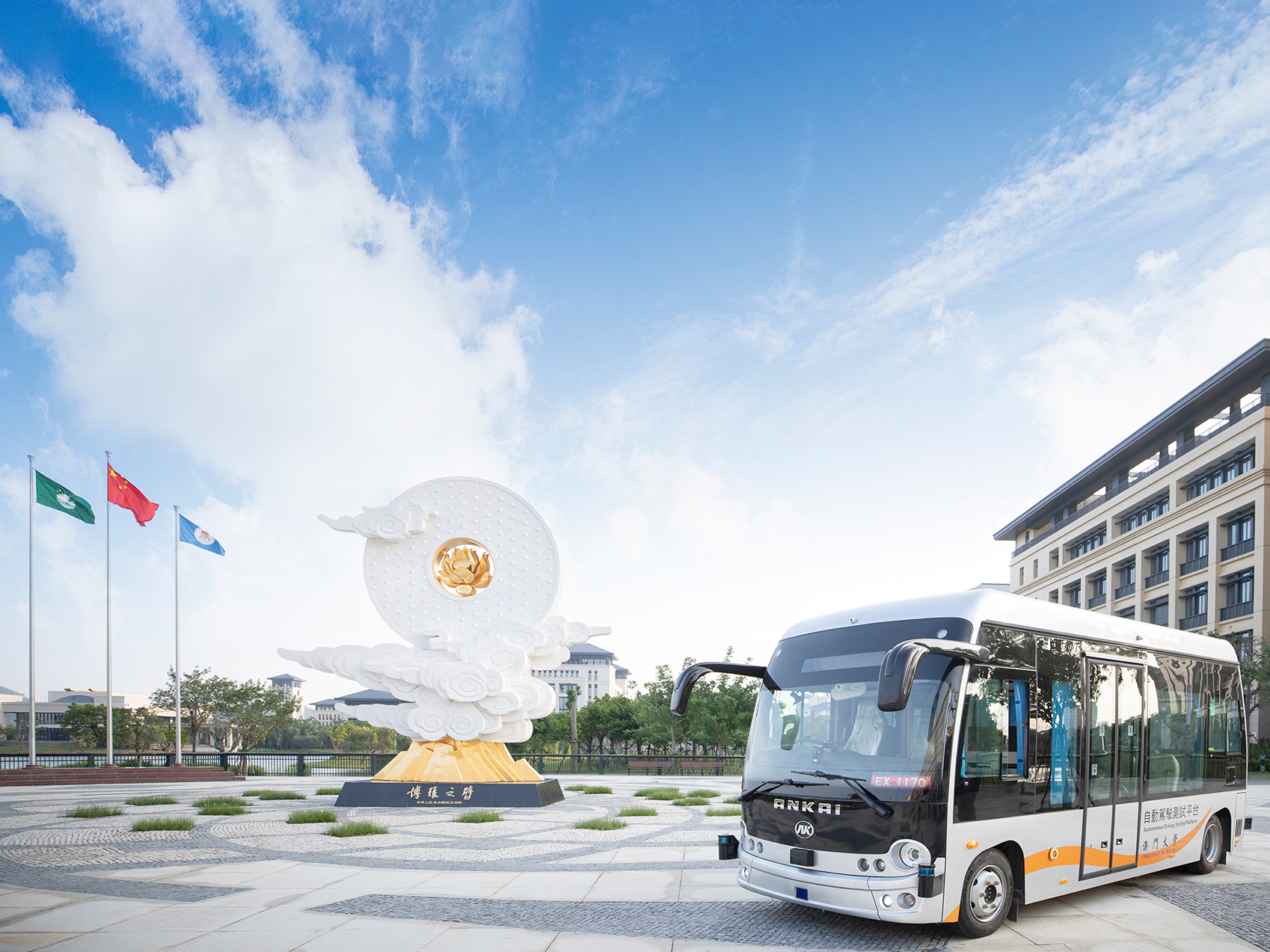 The research team is headed by Prof Xu Chengzhong, dean of UM’s Faculty of Science and Technology and chair professor of computer and information science. Prof Xu has studied self‑driving technology for over a decade. He worked with American automakers such as General Motors on the development of intelligent vehicles when he was a professor in Detroit. He has continued to explore the field since returning to China in 2011, and kick‑started this self‑driving car project in Macao after he joined UM in 2019. 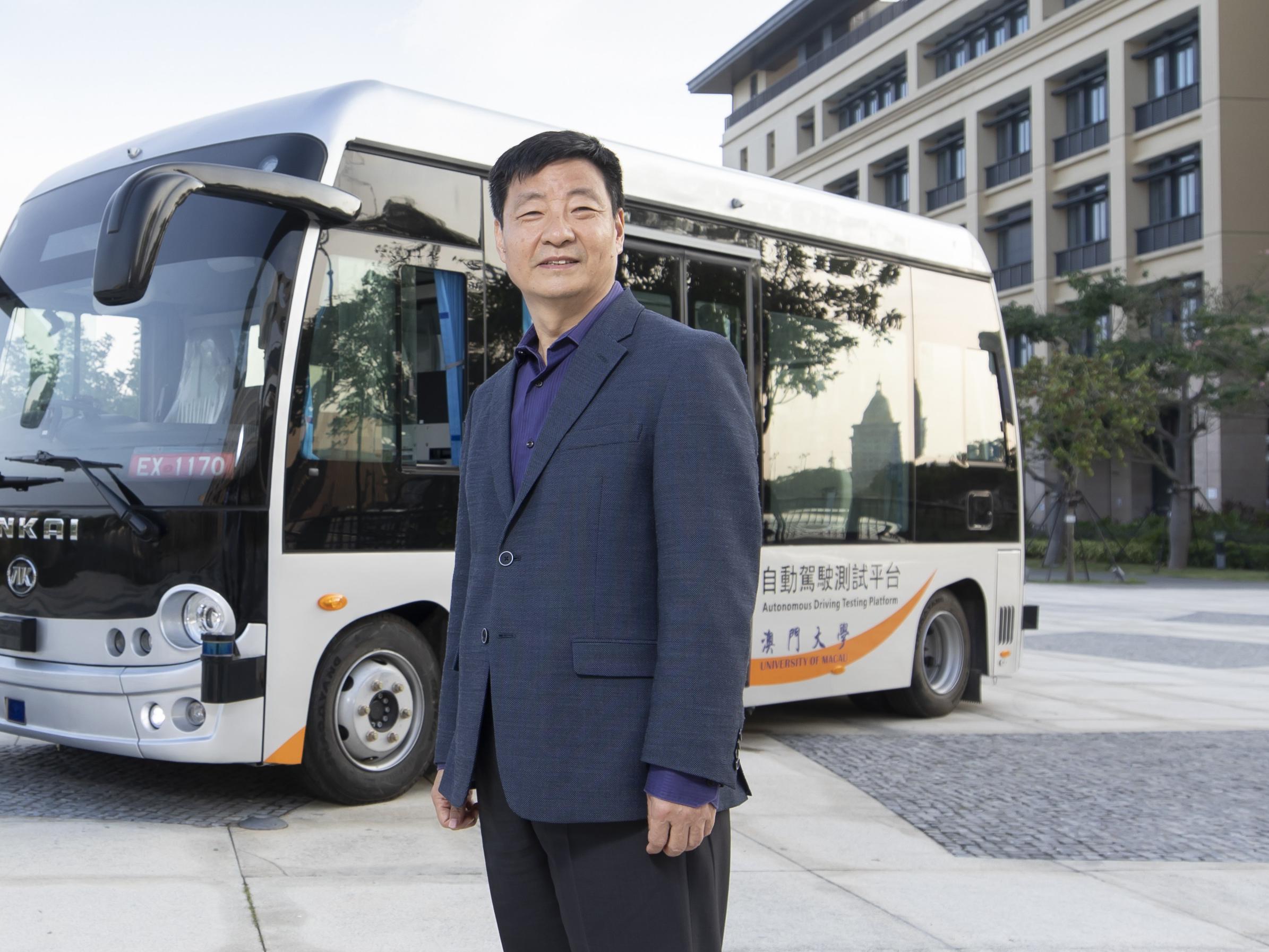 Self‑driving research has proliferated across the world. Today, cars can already drive themselves smoothly in controlled environments. However, Prof Xu says that we are still far from having fully autonomous cars that can safely navigate in extreme weather conditions and other unpredictable situations in the real world. In making self‑driving cars safer, Prof Xu’s team has seen some encouraging results. In 2019 alone, they published 22 papers on related technologies in leading academic journals and presented some other papers at top international conferences.

According to Prof Xu, Convolutional Neural Network (CNN), which is a popular type of machine learning model, is essential to self‑driving cars. A CNN loosely mimics the way a human thinks. Given a large image dataset for it to learn from, a CNN can be trained to detect objects such as road signs, vehicles, and pedestrians from new images.

The decision‑making power of a CNN largely depends on its training data. Most existing data for training self‑driving cars was collected in clear weather conditions, so it is easier for self‑driving cars to detect objects in good weather, but they may make serious mistakes in adverse weather conditions such as typhoons and snow. In theory, scientists can bring in more data to train a CNN (or other machine learning model) for every scenario. In practice, however, they probably won’t have enough data or time, nor can they foresee all the situations a car might encounter. 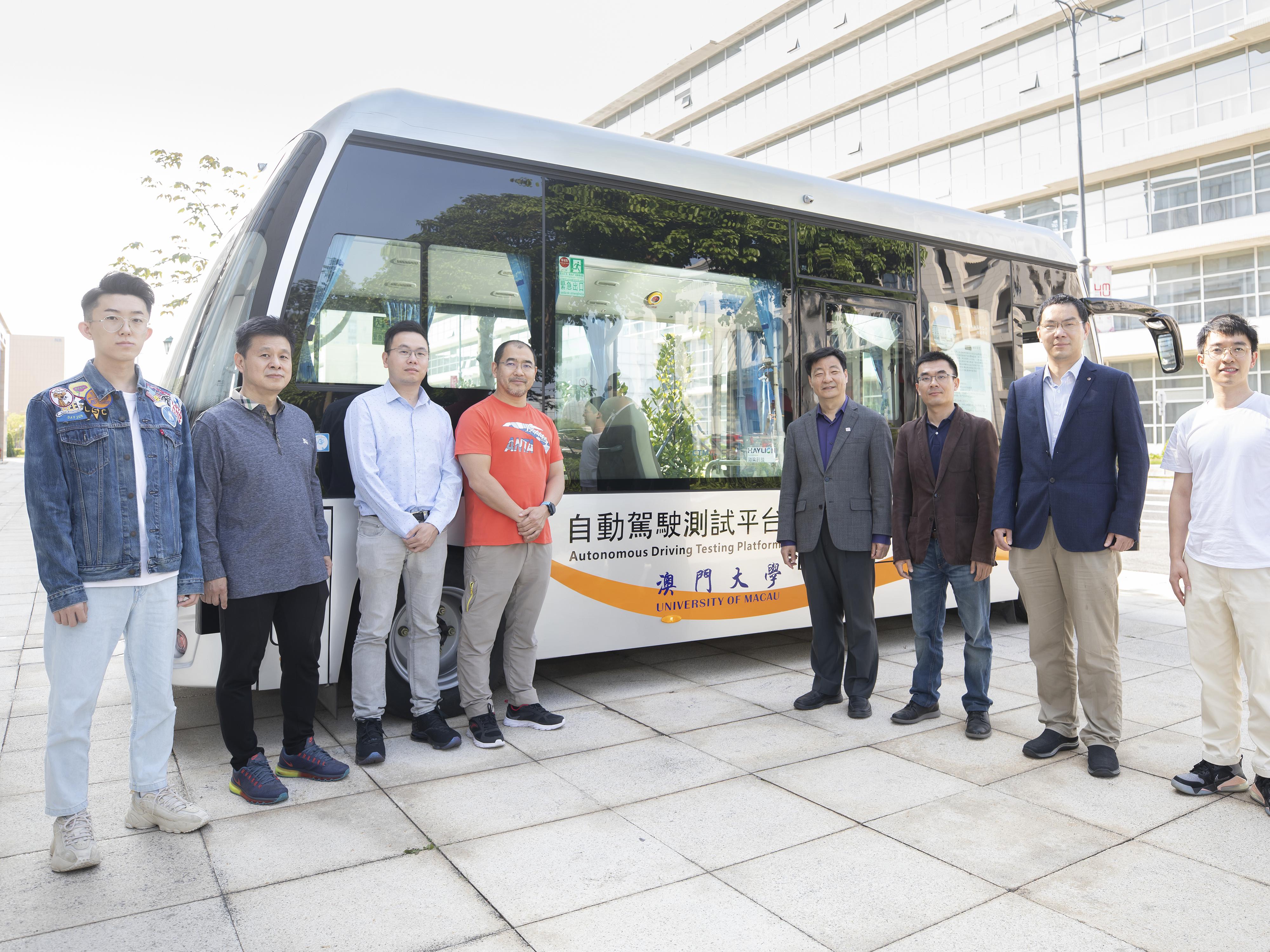 The UM research team behind the self‑driving project

One of the solutions is transfer learning, which works a bit like a cyclist learning to ride a motorcycle. By drawing on their experience, cyclists may find it easier to balance themselves on two wheels, without starting from scratch. Similarly, in the absence of enough data or time, researchers can train a machine learning model based on a ‘transferred’ model that has already been perfected for a similar task.

With the self‑driving car project, researchers at UM and Baidu have proposed a new way to help CNNs based on transfer learning to accurately detect objects like stop signs. Their algorithm is called Re‑Initialising the Fully‑connected LayEr (RIFLE), which is used in the ‘back propagation’ process in the training of CNNs. The researchers used a CNN trained with the new algorithm to classify, detect, and segment tens of thousands of images. It turns out that this CNN outperforms its rivals trained with some mainstream algorithms. The team has presented a paper about the RIFLE algorithm at the prestigious International Conference on Machine Learning.

We can remove unnecessary parts of a CNN before retraining it for a new but similar task. Known as ‘pruning’, the process can reduce the size of the original network and thus shorten the time required for training the new one. However, pruning sometimes sharply weakens the network’s decision‑making power.

To address this problem, researchers at UM, SIAT, and Baidu proposed a new pruning method called ‘Attentive Feature Distillation and Selection’ (AFDS). They used ADFS and some mainstream counterparts to prune a 101‑layer CNN, and then used the final products to identify objects from images stored in six databases. The results show that the AFDS‑pruned network remains very effective despite a 30 per cent cut on the amount of computation. Even when the amount of computation was reduced by 90 per cent, the network accuracy rate stood at 70 per cent, much higher than its competitors. The researchers have presented an academic paper about the AFDS method at the influential International Conference on Learning Representations.

The AFDS algorithm accelerates the training of machine learning models

Self‑driving cars must be able to identify everything around them. CNNs can usually perform such tasks effectively, but they can be vulnerable when facing cyberattacks or unclear objects like road signs with graffiti. This can cause potentially fatal mistakes like misreading a stop sign as a give‑way sign. Therefore, Prof Xu’s team has developed the ‘LAFEAT’ algorithm, which can make CNNs more robust to adversarial attacks or noise. The new algorithm has outperformed a dozen existing options in computer trials.

In mid‑2021, researchers at UM and SIAT presented the LAFEAT algorithm at the Conference on Computer Vision and Pattern Recognition, which has an acceptance rate of just 4.59 per cent. They also used the new algorithm to compete with 1680 teams from around the world at the CVPR Security AI Challenger, an algorithm competition jointly organised by the University of Illinois, Tsinghua University, and Alibaba Security. The team won a second prize, becoming the only winning team from Macao.

Stepping into a Driverless Future

Prof Xu’s team is also studying technologies to enable better interactions between humans and self‑driving cars. For instance, they are designing natural language processing solutions that will allow cars to respond appropriately to spoken commands. Moreover, they are searching for ways to help cars adapt to the complicated road conditions in Macao, a city known for its narrow roads and abundance of motorbikes. 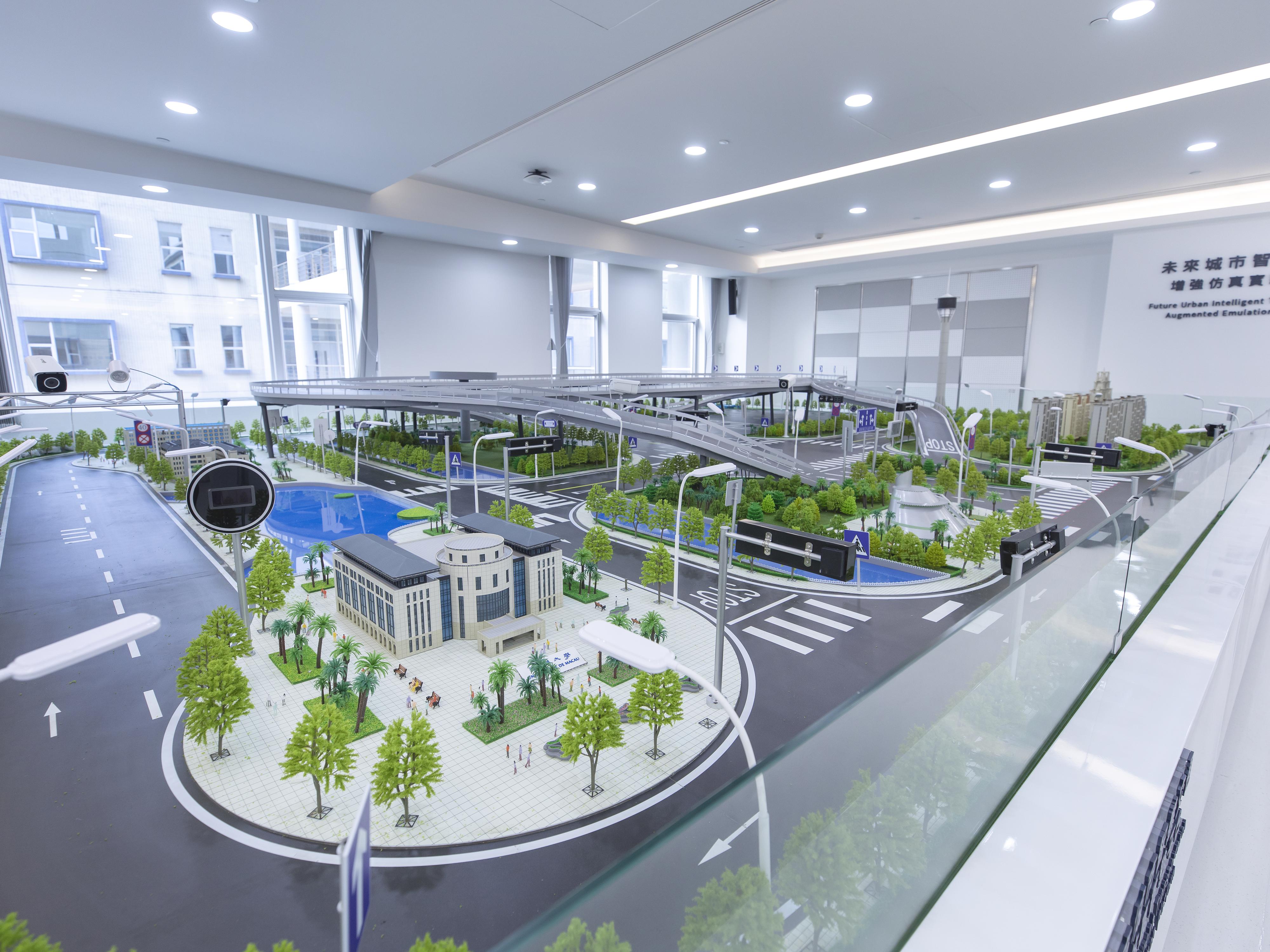 So, when can we take our hands off the wheels? Prof Xu believes that many technological breakthroughs need to be achieved before self‑driving cars can finally go mainstream. A driverless future would also need major transformations in transport and telecommunications infrastructure as well as new legal rules ‑ all requiring the concerted effort of various sectors of the community. Prof Xu says, ‘We will of course continue to advance self‑driving technology, but by launching our bus on the UM campus, we also hope to raise the public’s understanding of self‑driving cars, so that we can be better prepared for their deployment in Macao.’