Skip to content
Sun Guoxing: The First to Propose the Use of Cement for Nanomaterials

Sun Guoxing: The First to Propose the Use of Cement for Nanomaterials

Sun Guoxing, an assistant professor in the Institute of Applied Physics and Materials Engineering (IAPME) at the University of Macau (UM), is the first person to propose using cement to make nanoparticles. Interestingly, as a brilliant researcher who has developed a world-record-breaking material, Sun was quite unimpressive in his college years. In fact, he was anything but the typical straight-A student who breezes through college, reaping awards and accolades along the way. Rather, he was consistently at the bottom of his class. After three years of doctoral studies in chemical engineering, he was advised by his supervisor to withdraw from the programme. Desperate to find a new path, he switched to construction materials, a sub‑field of civil engineering, and finally began to blossom. Over the years, he has experienced ups and downs in his academic career. But he has never forgotten why he wanted to become a researcher in the first place—to give back to society by doing work that makes a difference. So he plodded on, applying his multidisciplinary background to his research in advanced materials. Breakthroughs came. Records were broken. Eventually he began to shine.

Scientific Research with a Social Impact

Sun’s laboratory is located on the ground floor of the IAPME building; it is a joint laboratory operated with Prof Li Zongjin of the same institute. About 240 square meters in size, this laboratory is arranged like a production department. When Sun joined UM in 2017, it was just a roughcast space, which he designed and built into the current laboratory with Prof Li. 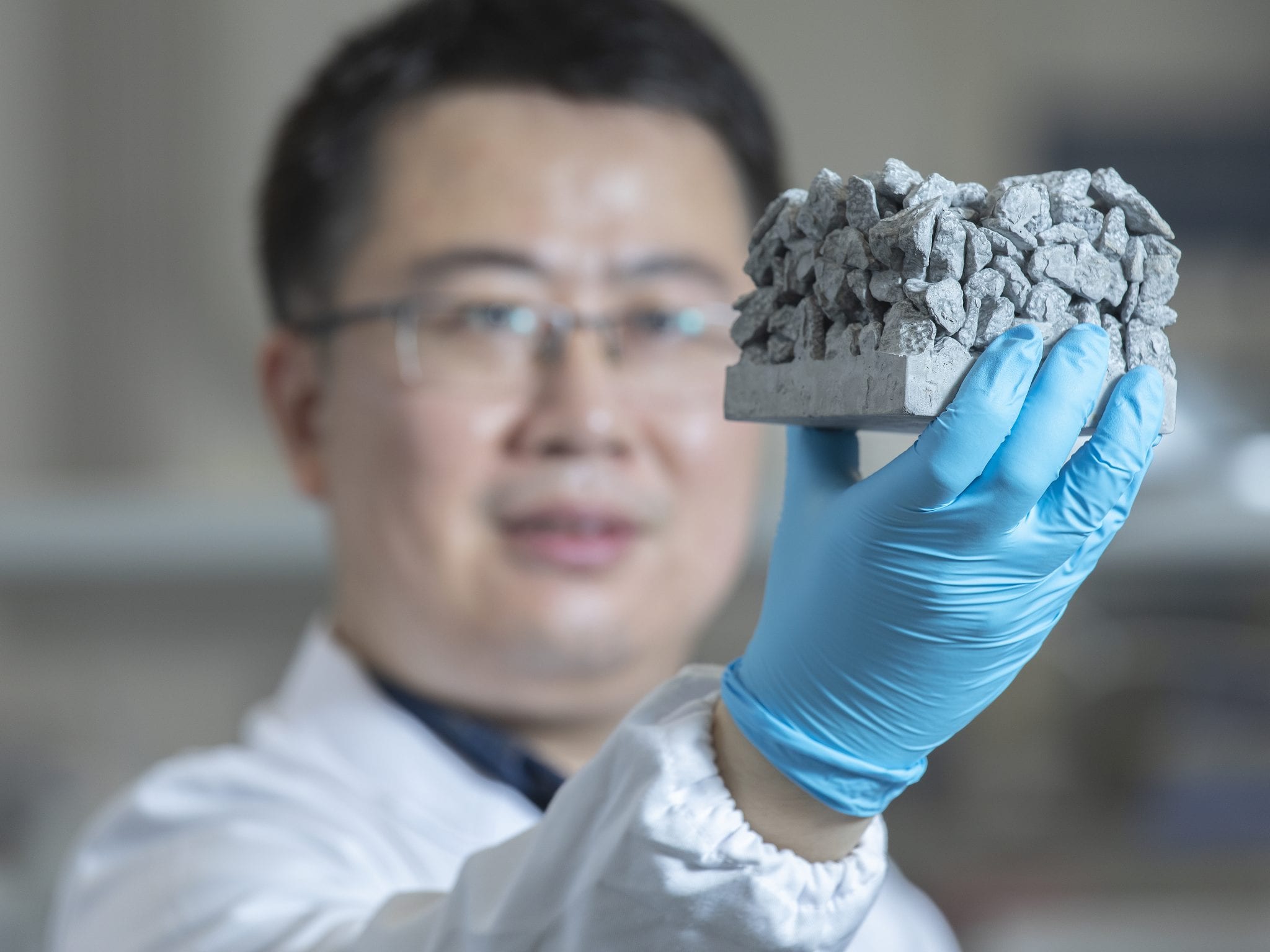 Prof Sun was the first to discover that by putting cement into ice water, he can obtain small five‑nm particles that can be used to make high‑performance nanomaterials. At UM, Prof Sun and his team invented a series of new hydrogels made of nanoparticles derived from cement. What initially caught their eyes was the excellent mechanical properties of the gel. For example, it can be compressed to 1 per cent of its original size and return to its original size within one second. The team took advantage of this special property and developed three products. The first product can absorb four times its weight of organic pigments. The second product has extremely high electrical conductivity and excellent plasticity, and can be used as a flexible sensor material with high conductivity. The third product is a super‑absorbent resin, which can absorb up to 13,600 times its own super‑absorbent resin weight of water; this is two to three times the previous world record. ‘The water content of this gel that has absorbed water reaches 99.993 per cent; you can’t find another substance with higher water content,’ says Prof Sun. 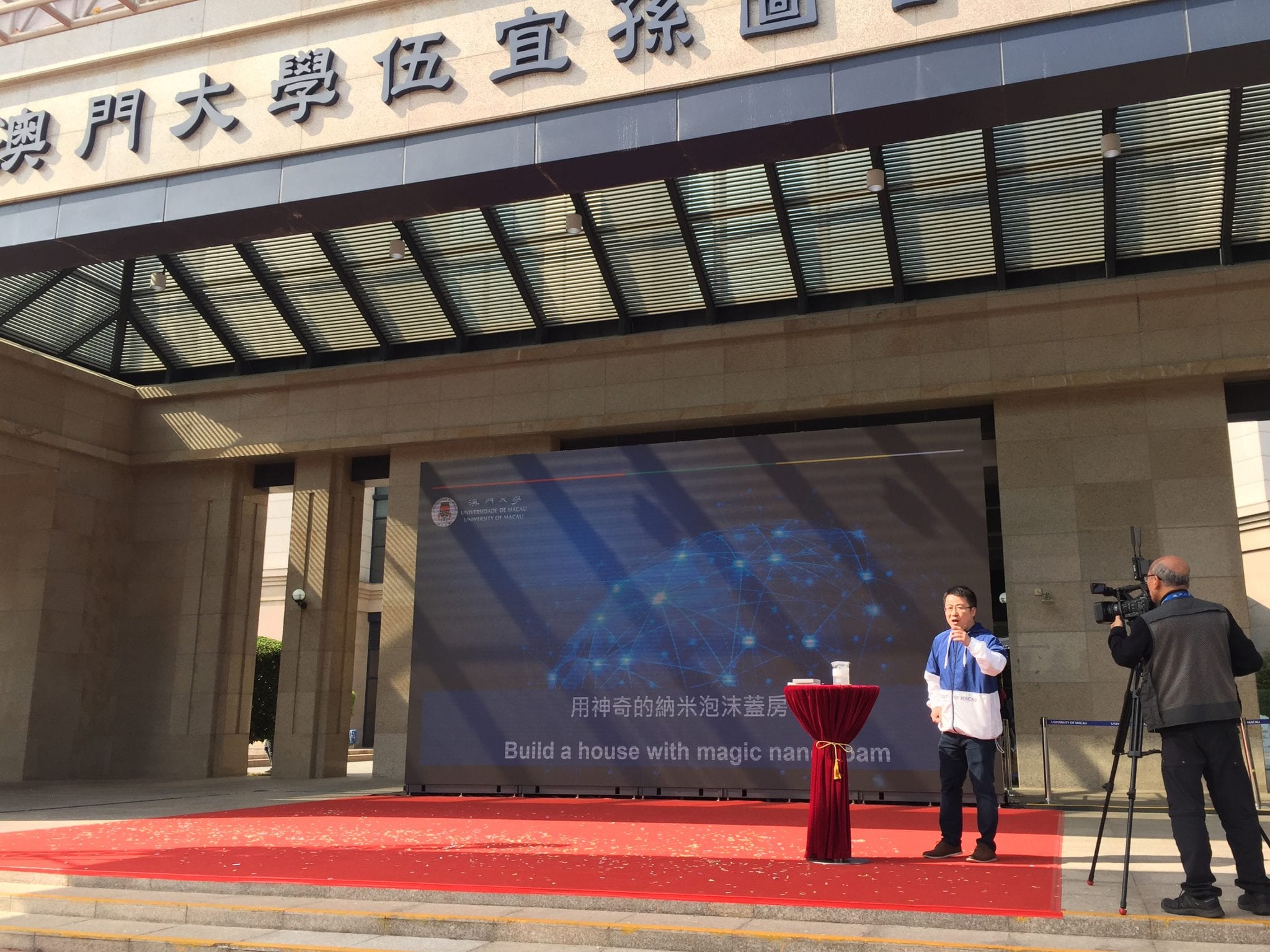 Ups and Downs in His Student Years

Born in Huai’an city, Jiangsu province, Sun almost monopolised the top spot in the city’s standardised examinations for high school students. When preparing for college, he selected Tsinghua University’s automation engineering programme as his first choice, which was the programme with the highest admission standard at Tsinghua University. Unfortunately, he fell short of the necessary admission marks by five points. He ended up studying chemistry at BeijingNormal University, which was not among his original choices for a college major. A 17‑year‑old young man who had just been denied admission to his favourite university to study a major of his choice, Sun felt completely disoriented and demoralised. As a result, he idled away his first three years in college, and sat firmly at the bottom of his class. ‘I was constantly doubting myself and everything I did, and I lost hope for my future,’ he says. ‘Fortunately, I met Prof Liu Zhengping, the first mentor in my life. He asked me to join one of his research groups, and gave me my first exposure to scientific research. By the time I graduated, my thesis was almost nominated for an excellent undergraduate thesis.’

When Sun graduated in 2004, Prof Liu encouraged him to pursue a master’s degree at the university.Sun took his advice, but failed the necessary tests inEnglish and politics. So he returned to his hometown, teaching chemistry in a local vocational school while fervently studying English in his spare time. He took and failed the master’s entrance examination three times before he was finally admitted. Looking back, he says: ‘I was only 21 years old, but I knew I had to go all out and give it a try, because if I made it, at least I would have a chance to change my life.’Soon after starting his master’s studies, and based on his outstanding research performance, Sun was recommended by his supervisor Prof Liu for a joint training programme conducted by the university and the Institute of Chemistry of the Chinese Academy of Sciences (ICCAS). ‘My research and training were both completed at ICCAS. Prof Chen Guangming of ICCAS played a very important guiding role in my research,’ says Prof Sun. He did not let down his mentors who had great expectations for him. In just two years, he published three papers in journals indexed in Science Citation Index and one paper in a core journal.

Sun’s education journey was anything but smooth sailing. In 2009, when he graduated from his master’s programme, he missed the deadline for applying for a government‑sponsored PhD programme overseas, so he found a job in an education group as a chemistry teacher and became a ‘star teacher’ in only six months. This experience honed his teaching skills, but his eyes were set on bigger goals. During the one year when he worked as a teacher, Sun wrote more than 200 application letters for PhD programmes. Eventually, he received offers from four universities, including Delft University of Technology, one of the four major technology universities in Europe, and the HongKong University of Science and Technology (HKUST).He finally chose HKUST.

Sun’s first doctoral supervisor was Prof Chan Chi Ming in the Department of Chemical and Biological Engineering at HKUST. ‘The focus of my doctoral research at that time was the study of traditional polymer crystallisation theory. ‘My supervisor didn’t think I was right for this direction, much less likely to achieve any breakthroughs, so he advised me to withdraw from the programme, saying that otherwise I may not be able to graduate,’ recalls Sun.

Feeling utterly demoralised, Sun quit the programme.A few days later, he sent an email to Prof Li Zongjin in the Department of Civil and EnvironmentalEngineering, in which he explained his situation and sought Prof Li’s advice and help. Prof Li did not want to see Sun’s three years of studies end in vain, so he asked Sun to join his research group so he could finish his PhD degree. ‘Civil engineering opened up a new world for me. It was like “discovering a new continent”,’ says Sun. ‘Prof Li’s guidance shaped my philosophy of scientific research and management.’

Thanks to his solid knowledge of chemical technology, in June 2013, less than a month after he joinedProf Li’s group, Sun discovered some chemical technologies that can be applied to the field of building materials. Three months later, he published his first research article on materials in a SCI‑indexed journal. To this day, he still remembers the excitement he felt when he first discovered five‑nanometre particles in cement suspension under an electronic microscope. Following that discovery, he became the first in the world to propose the use of cement to make the world’s cheapest, mass‑producible nanoparticles. ‘That was when I began to realise that product innovation and theoretical innovation were what I was best at,’ he says. 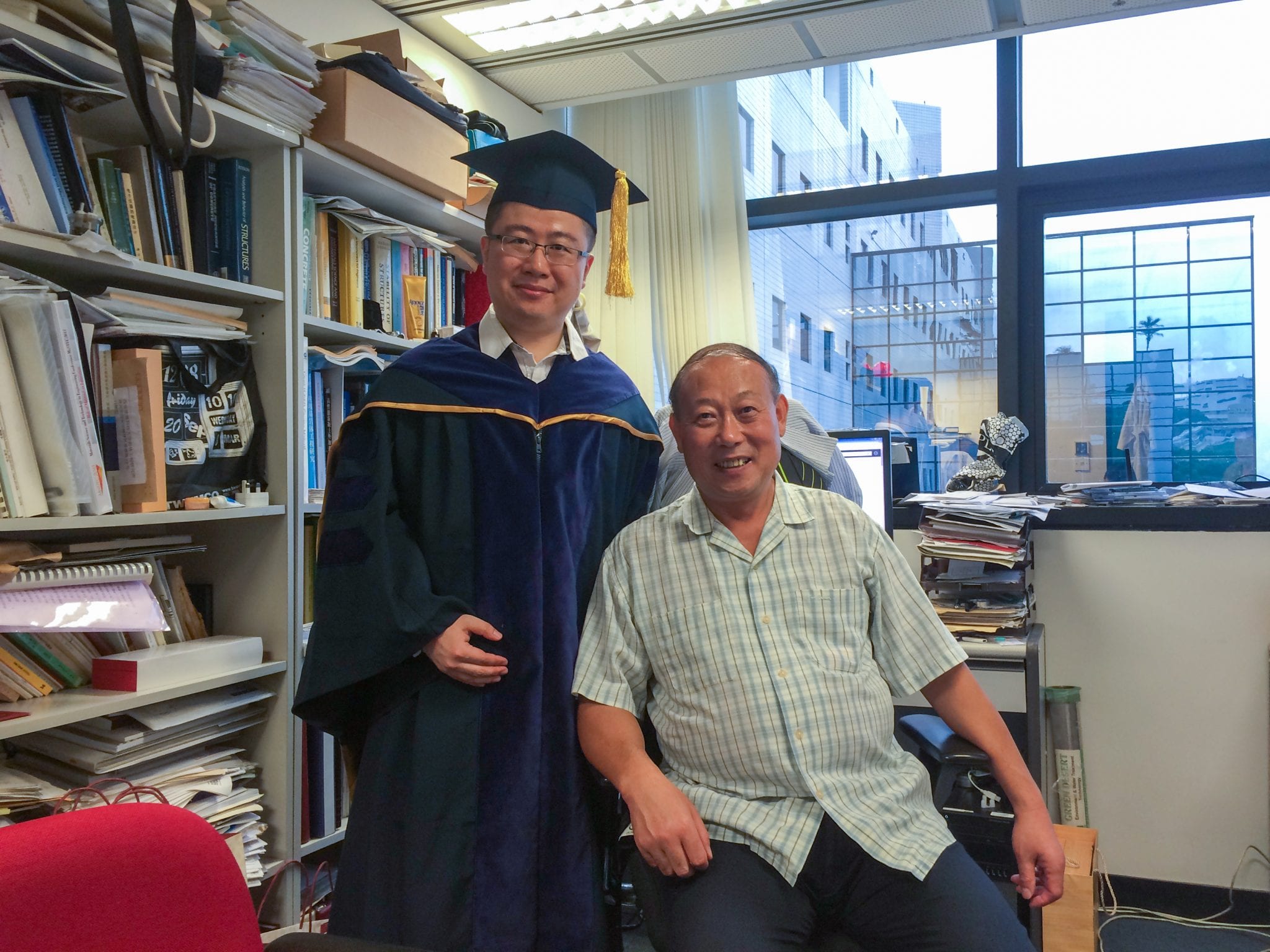 Sun completed his PhD programme in civil engineering within a year and a half. After graduation, he first worked as a research and development engineer at Nano and Advanced Materials Institute Limited (NAMI)in Hong Kong while simultaneously holding a part‑time position as a postdoctoral researcher at HKUST. Within two years, he created two inventions, an innovative nano‑foam that can remain stable in the air for up to two years and a lightweight and high‑strength foamed cement made from the nano‑foam.

Prof Sun Guoxing (3rd row, 1st from left) participates in an academic conference during his senior year in college. It was not until after he joined UM that he realised that one professor in a group photo taken at that conference was IAPME Director ProfTang Zikang (1st row, 3rd from left).

A Strong Motivation for Research

In 2017, Sun visited UM for the first time and fell in love with its academic ambience. Later, he decided to joinUM. He has worked with his mentor Prof Li Zongjin on research projects and postgraduate training. So far, they have jointly supervised more than 20 doctoral and postdoctoral students. ‘Research has always been my greatest passion, and being able to give back to society with research makes it even better,’ says Prof Sun.

Transforming research results into products that are useful to society has always been the driving force behind Prof Sun’s research. Earlier, Zhuhai UM Science & Technology Research Institute established a demonstration base for industry‑academia collaboration in Hengqin, Zhuhai, in Guangdong province. Prof Sun quickly saw the opportunity. He plans to set up a small production line in the research institute so he can use the products developed as intermediate raw materials such as a water‑absorbing swelling agent, which he hopes can be applied in the future to farmland water retention and desert management. ‘We plan to first produce the swelling agent in the form of powder and then find some companies that make water‑absorbent resins to produce products for everyday use, such as diapers or farmland water‑retaining agents,’ he says.‘We plan to launch the products onto the market with Zhuhai Gaolan Port Industrial Park, which is the biggest industrial park in western Guangdong.’

Prof Sun has found the space for innovation in an interdisciplinary field. As he often says to his students:‘As long as you don’t give up, you will succeed eventually.’ He looks at the road ahead with confidence and excitement, saying: ‘There is still a vast uncharted territory for me to explore.’ 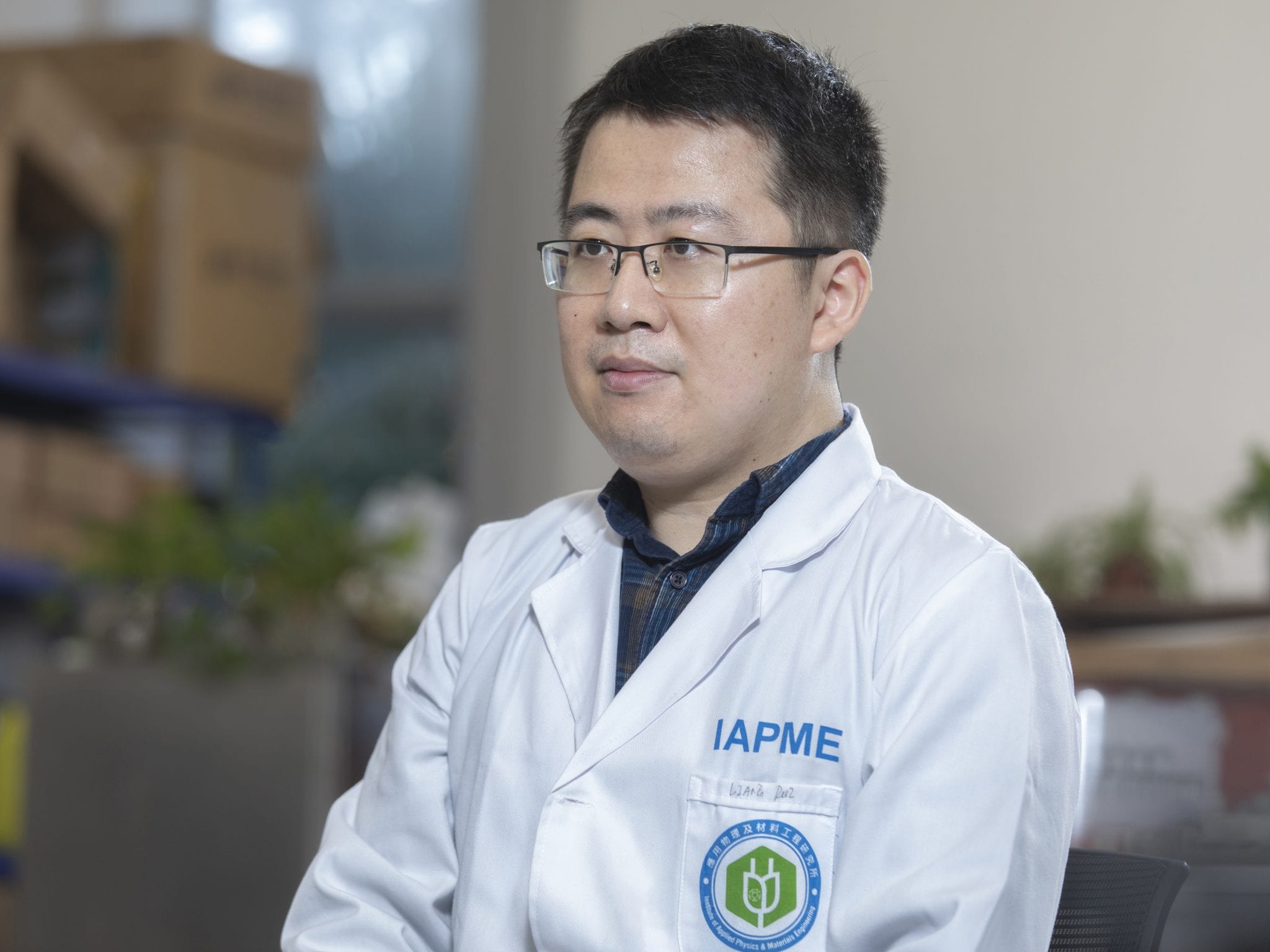 Prof Sun Guoxing’s main research interests include polymer cement‑based nanocomposites, polymer crystallisation, concrete admixtures, preparing nanoparticle‑reinforced polymer hydrogels via cement hydration, and nanoparticle‑stabilised foams. He was the first to propose the use of cement to make the cheapest, mass‑producible nanoparticles. He has published more than 50 academic papers and has applied for six Chinese invention patents (one already granted) as the first or main inventor, and he holds one US invention patent. In 2019, he received the Scientist Medal from the International Advanced Materials Association.