With a growing global energy crisis and the proliferation of environmental pollution, it is increasingly urgent to develop new forms of green energy. In 2014, the University of Macau (UM) established the Institute of Applied Physics and Materials Engineering (IAPME), which is the only institute in Macao dedicated to exploring new forms of energy, electro-optical conversion, and advanced materials and technologies, with the aim of helping to resolve the global energy crisis.

Since its establishment, the IAPME has garnered a group of young, innovative researchers from world-renowned universities and research institutions in the United States, Europe, Japan, Singapore, and Hong Kong. Among them, Chair Professor Tang Zikang, director of the IAPME, is an internationally renowned leader in the field of nano-optoelectronic materials. Under his leadership, IAPME has rapidly progressed in research capacity and innovative power in just a few years, as evidenced by the research grants from the National Natural Science Foundation of China, Macao Science and Technology Development Fund, and the UM Research Fund. With more than 70 ongoing research projects and over 300 papers published in SCI-indexed journals, the institute’s international academic inﬂuence is growing steadily. 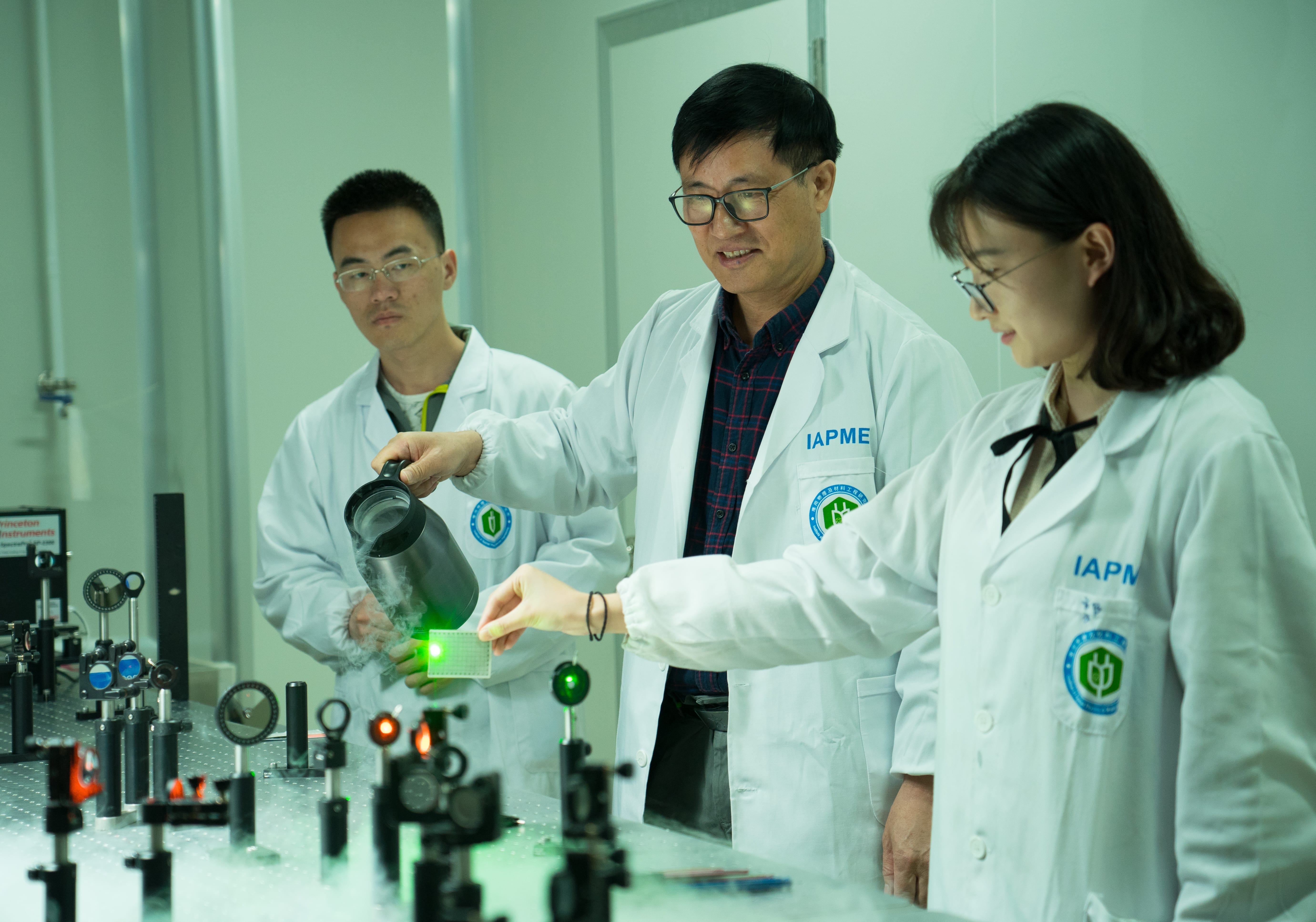 The IAPME, led by Prof Tang Zikang has achieved many breakthroughs

According to Prof Tang, physics and chemistry are the foundation of what IAPME researchers do and materials are the vehicle for fulfilling their mission—developing new materials, new techniques, and new functions through materials simulation and design. With an application-oriented approach, the institute strives to develop innovative academic programmes in applied physics and materials engineering with local characteristics in order to nurture professionals who can develop new technologies needed by Macao and the Greater Bay Area. Currently, IAPME researchers focus on developing key materials and technologies for applications in the fields of solar energy, electrical energy storage (batteries, hydrogen storage, fuel cells) and energy conservation(high-efficiency optoelectronics and solid state lighting devices).

Prof Tang says: ‘Materials engineering is a broad concept. We can’t cover everything. Our current focus is on developing new forms of energy and new materials such as optoelectronic and electro-optic materials, as well as new technologies. We hope to develop new forms of efficient, clean energy using nanotechnology and explore the applications of optoelectronic and electro-optic technologies. These research studies will hopefully bring about a change in the existing academic programmes in new energy and promote the development of related industries in Macao. New energy has the potential to become a new pillar industry in Macao.’ 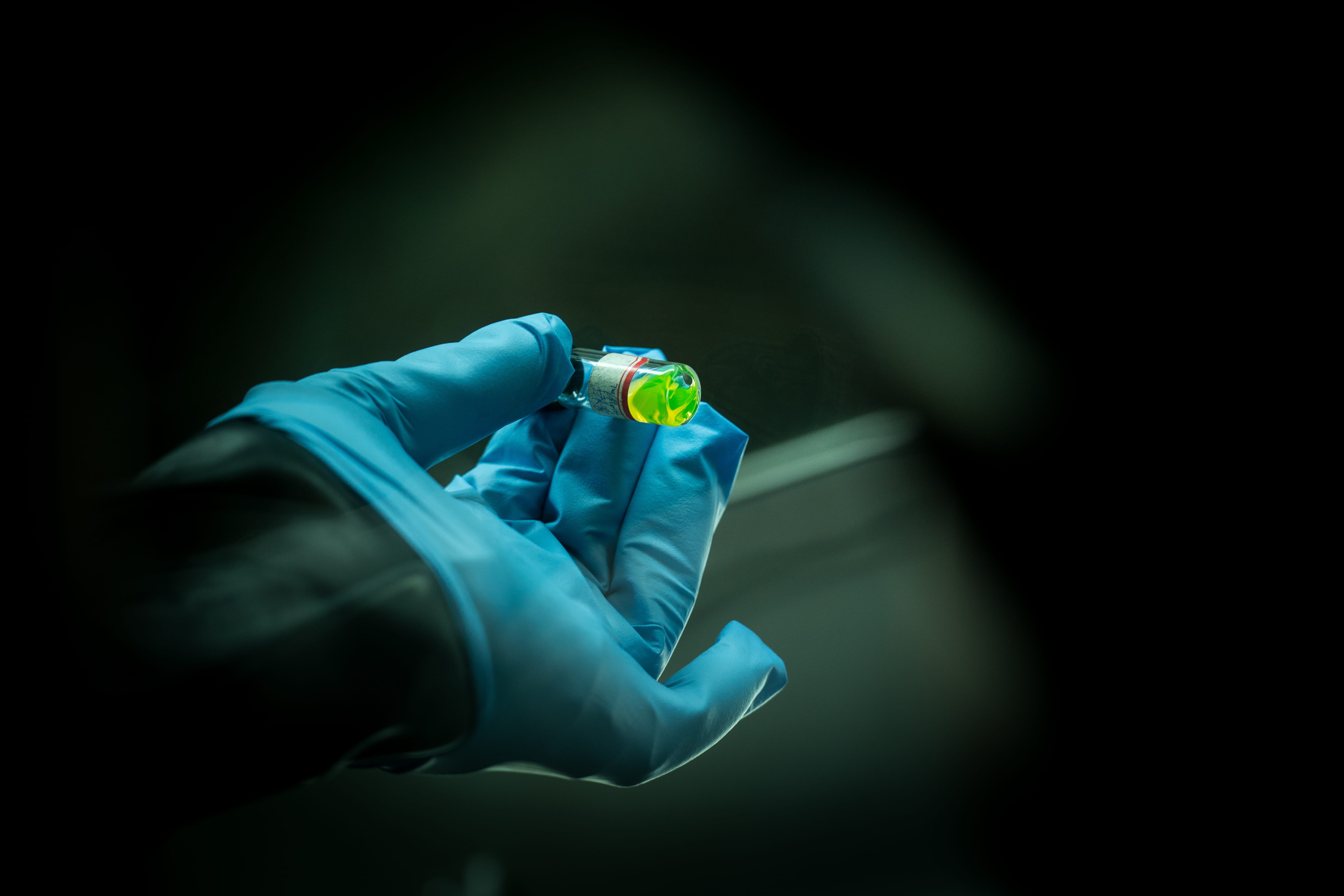 Developing new forms of green energy is one of the main research interests of the IAPME. In fact, the perovskite solar cells developed by the institute have already attracted considerable international attention.Prof Tang explains that the solar cells currently available on the market are mostly made of polysilicon, whose manufacturing process is expensive, consumes much energy, and produces many pollutants. On the other hand, the perovskite solar cells which are developed by the institute can be mass-produced through low-temperature printing at a low cost. Xing Guichuan, an assistant professor in the IAPME, who is mainly in charge of the development of perovskite solar cells, says that perovskite solar cells have not only demonstrated excellent performance, but also have the optoelectronic properties of inorganic semiconductors and can be processed in solutions like organic materials. They can effectively convert solar energy into electrical power. According to the latest report, they can achieve a photoelectric conversion efficiency of 23.7%, comparable to that of single crystal silicon (26.1%) and far higher than that of dye-sensitised solar cells (11.9%) and organic solar cells (12.6%). Moreover, according to Prof Xing, perovskite materials are soft and light, so they can be printed on backpacks or clothes to store solar energy through spray painting technology, which can greatly improve efficiency. He believes that in the future perovskite materials will have more applications in the development of smart cities.

In addition to perovskite solar cells, Prof Xing is also in charge of the development of perovskite nanocrystalline light-emitting diodes (LEDs), which are hailed as ‘the next-generation LED technology’. They are expected to bring low-cost, environmentally-friendly and highly-efficient LED displays and light sources into everyday life.

Indium, a raw material used to make gallium nitride LEDs, is a scarce metal with very small global reserves. Some even argue that the earth might run out of indium in a few decades. This is why scientists are already exploring alternative materials to replace indium. Prof Xing is one such pioneer. If successful, his work will substantially improve the luminous efficiency of perovskite LEDs. ‘About20 per cent of electrical power in the world is used for lighting, so it is very important to develop efficient lighting technology to conserve energy,’ he says. ‘The process of making perovskite solution is simple, less expensive, and highly consistent. Because of the high photoelectric conversion efficiency of perovskite, which is over 20per cent, close to the peak photoelectric conversion efficiency of other expensive semiconductors, it has become a subject of widespread study worldwide. I believe that the popularisation and commercialisation of this technology in the near future will help us achieve the goal of energy conservation.’ 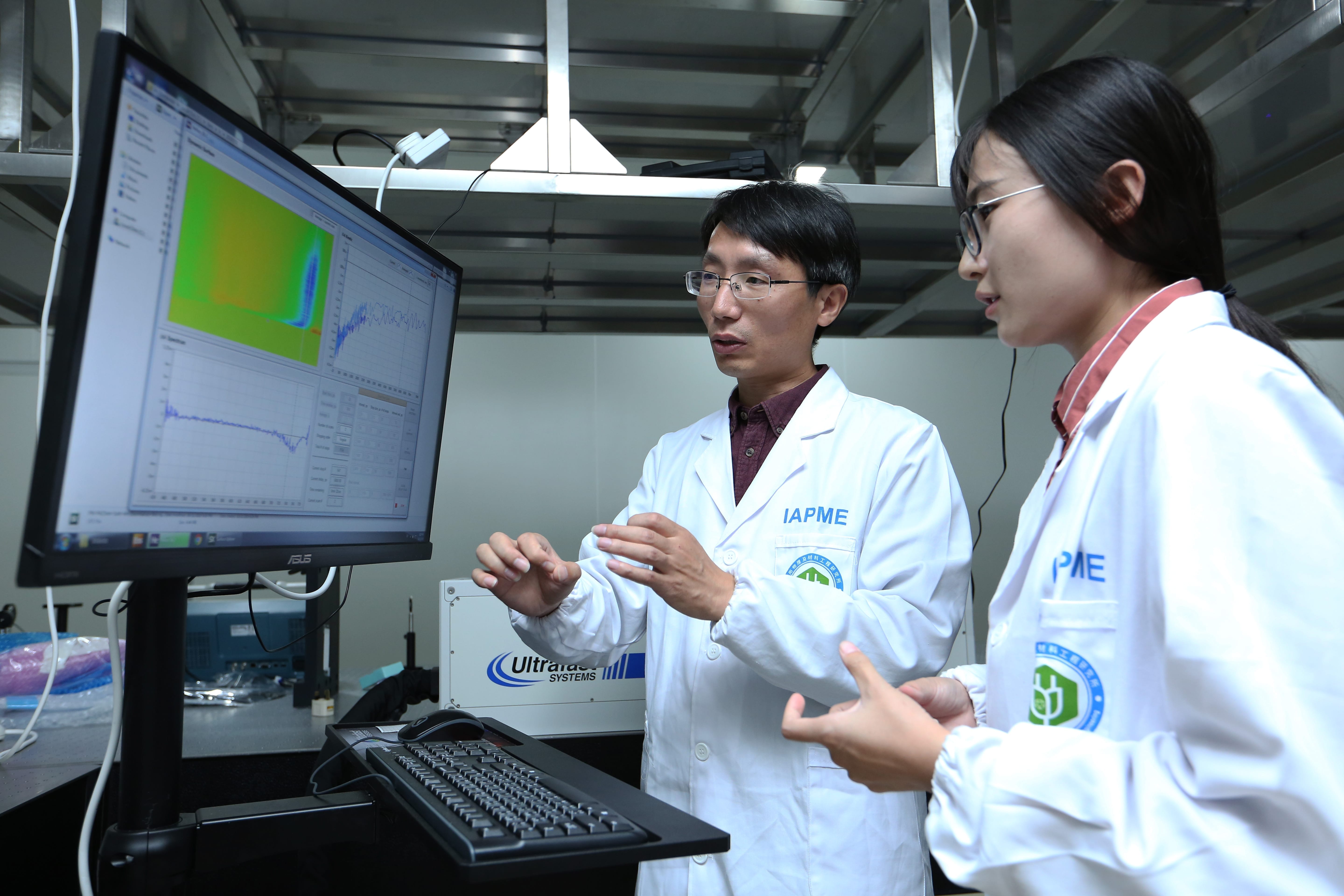 Another proud brainchild of IAPME researchers is an innovative super hydrogel. This super hydrogel significantly outperforms regular hydrogel in water absorption, swelling ratio, electrical conductivity, and mechanical properties, and can be used in many fields to meet diﬀerent needs. IAPME assistant professor Sun Guoxing explains that this new hydrogel can absorb up to 13,600 times its own weight in water. In other words, one gram of this hydrogel can absorb over13,000 grams of water, which is three to four times the water-absorption ability of the most water-absorbent hydrogel ever recorded. Because of its superior water absorption ability, it can be used to make everyday products such as moisture absorbers, sanitary napkins, and diapers; or buried in the soil to retain water for farmland or deserts. Moreover, it can absorb twice as much organic pigment as the current versions of hydrogel. So it can be used to absorb the pollutants in waste water in order to produce clean water.

According to Prof Sun, this hydrogel uses inexpensive cement as the cross-linking agent and therefore costs far less than the commercial products currently available on the market. In terms of mechanical properties, it is softer, more resilient, elastic, and shock-absorbent than rubber, which makes it an ideal material for cushions in many fields such as electronics, construction and machinery. In terms of electrical performance, its surface conductivity is five times greater than the highest surface conductivity ever recorded. It can be used to make ﬂexible electronic devices, such as ﬂexible printed circuits and capacitor diaphragms. Finally, hydrogels are highly compatible with biological cells and can provide a perfect environment for cells to live and grow. Therefore they can be used to make next-generation medical tissues or artificial organs, with the dual advantage of superior mechanical performance and high biological compatibility. Three China patents are pending for this technology 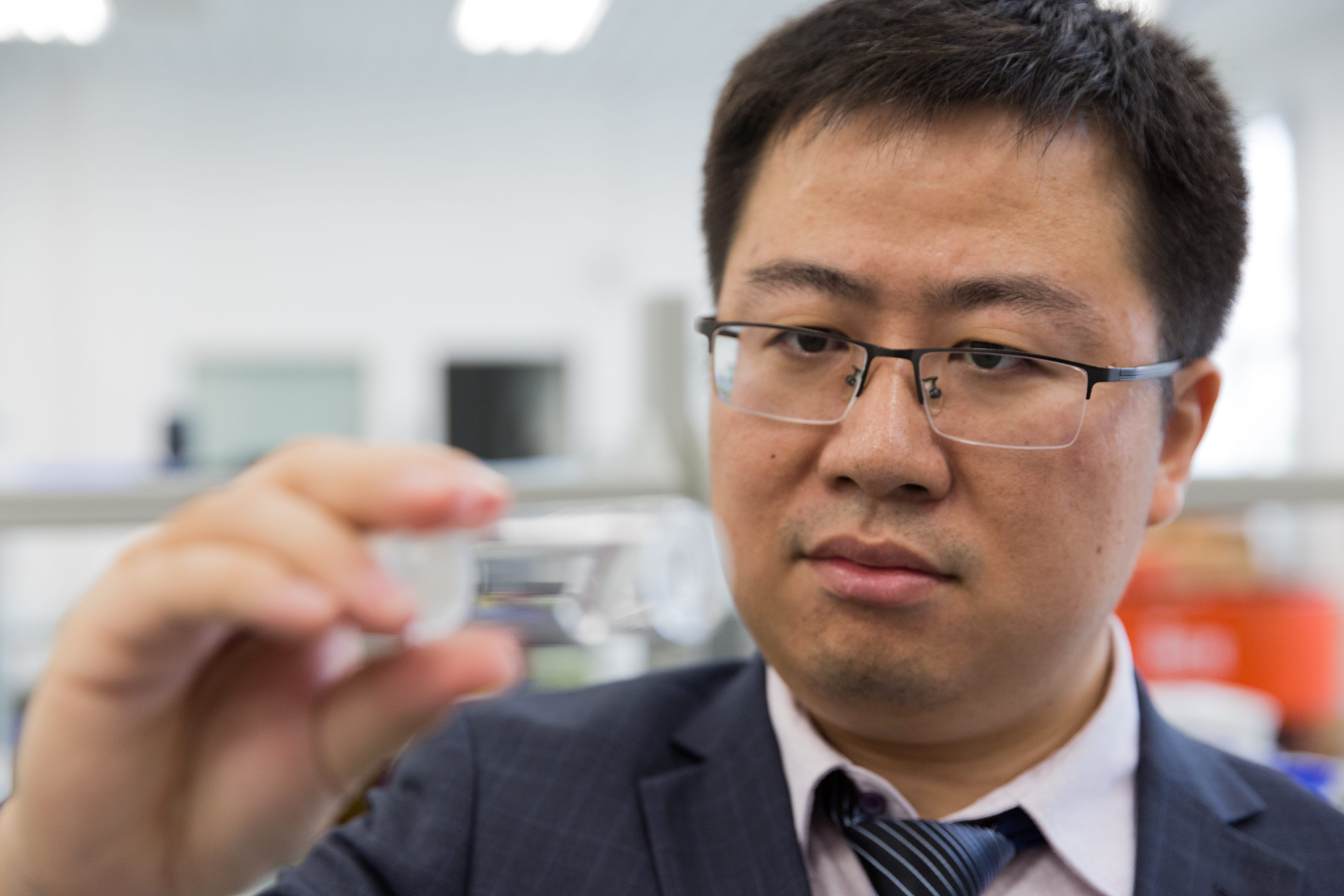 IAPME boasts a group of physicists and chemists who specialise in diﬀerent fields. Together, they explore the frontiers of scientific research and promote the development of related disciplines in Macao. Prof Tang says that through initiating research studies in materials engineering, not only can the institute nurture science and technology professionals for Macao, but it will also hopefully bring about new changes to the industrial structure of Macao. Another focus of IAPME researchers’ eﬀorts is the development of materials and technologies for ﬂat panel displays. They are specifically exploring ways to maximise the performance of semiconductor colloidal quantum dots (‘quantum dots’ for short, one of the semiconductor nanocrystals) and turn electricity into light in the most eﬀective way.

Wang Shuangpeng, an assistant professor in the institute who is in charge of related studies, says that because of the quantum confinement eﬀect, the wavelength (colour)of quantum dots can be continuously adjusted from the wavelength of near-infrared light to that of blue-violet light by adjusting the particle size of quantum dots. The colour purity of quantum dots is extremely high, making the colour of the display closer to that of the real world seen through the human eye. In addition, quantum dots consume less luminous energy and therefore costless, making them a sensible mainstream choice for future displays. ‘Science and technology are the primary productive forces. New display technologies have the potential to spawn a new industry, or even help Macao to seize a new market and enhance its competitiveness,’ says Prof Wang. 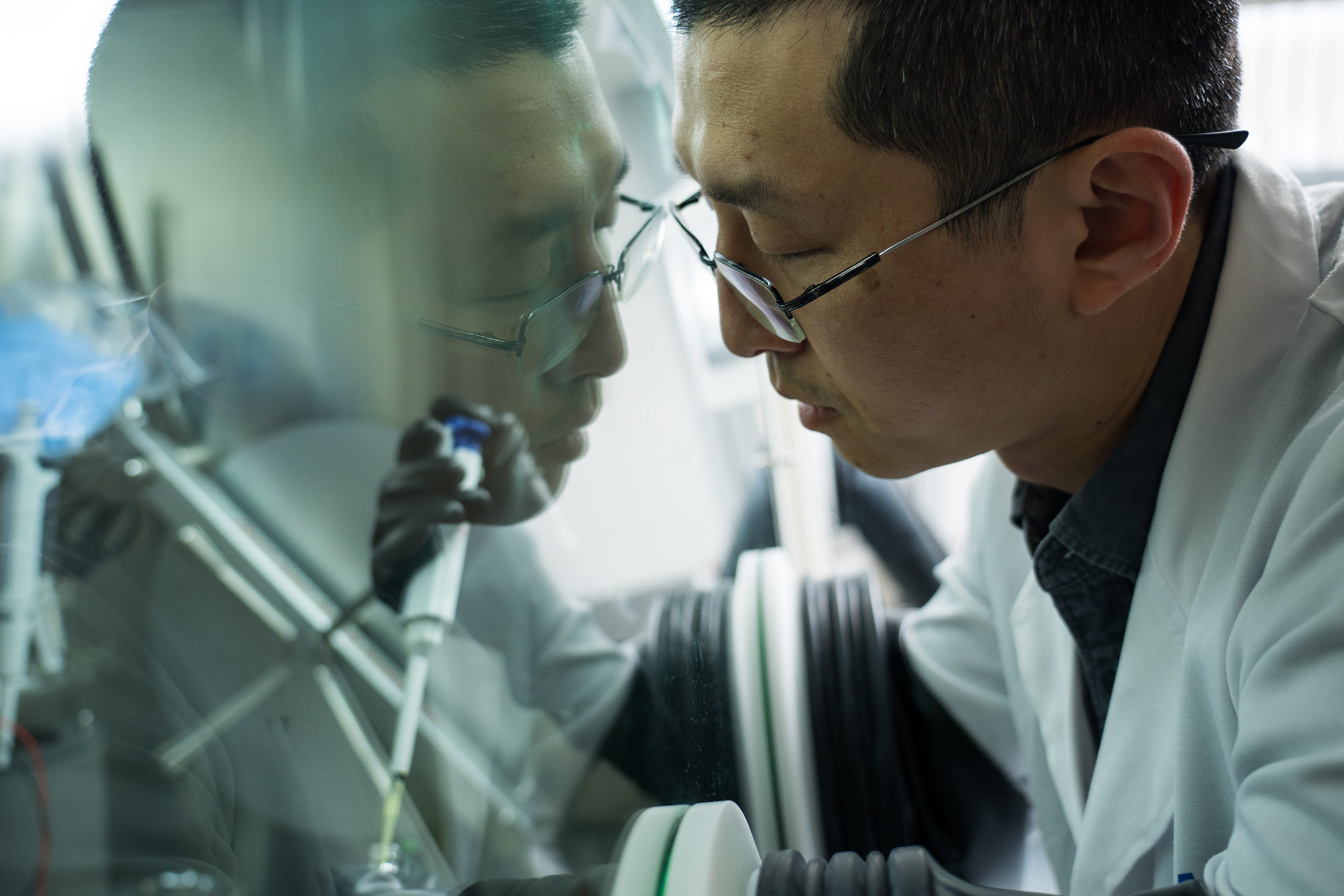 The IAPME has also achieved an encouraging breakthrough in the development of nanomaterials for biomedical applications. Prof Tang says that quantum dots can convert light into heat energy, which can not only kill cancer tumours, but also induce innate immune memory in the body. This means that once the cancer is cured through nano-photothermal therapy, it will never recur. It is a revolutionary non-invasive way to activate the body’s immune system to cure cancer.

The IAPME is now involved in interdisciplinary, collaborative research projects with the UM Faculty of Health Sciences and Institute of Chinese Medical Sciences. Experiments on mice have produced excellent results. Once successful, the cancer vaccines will produce enormous social benefits and commercial value, as well as revolutionary repercussions in the field.