In 1978, the world’s first GPS artificial satellite was launched, opening up endless new possibilities for network development. In the same year, the teenage Weijia Jia put down his hoe and left his home in rural Guizhou for a university in Hunan province, where he embarked on a new chapter of his life that would eventually launch him on a career studying big data and the Internet of Things (IoT). But at the time in 1978 when he started his college major in computer sciences, Jia had never seen a computer or heard of the internet, much less imagined that one day he would become an expert in big data and IoT.

In 2018, he was invited to assist with the development of Macao into a smart city. Currently a chair professor in the Department of Computer and Information Science at the University of Macau (UM), Jia says, ‘Exciting new things keep emerging in the field of the internet. A keen curiosity is what has been driving me in my exploration in computer sciences.’

A Journey that Starts at the Foot of Mount Yuelu

Prof Jia is also the deputy director of the State Key Laboratory of Internet of Things for Smart City (University of Macau) and director of the Centre for Data Science at UM. Forty-one years ago, he was among the first cohort of Chinese students to take the national college entrance examination after it was reinstated following the end of the Cultural Revolution. His father trudged miles of mountain road to deliver the admission letter to him and proudly told him how the news that he was accepted by a university had electrified the entire village.

When the Tang dynasty poet Du Mu arrived at Mount Yuelu on an autumn evening more than 1,000 years ago, he paused and wrote the poem ‘Mountain Trip’, whose two famous lines, ‘I stop my carriage for I love the maple trees in the twilight/The leaves after the early frost are as crimson as flowers in February’, echoed beyond the mountain, down through the generations. On a February day, Prof Jia also arrived at the foot of Mount Yuelu, except that he was not there to admire the early spring flowers, but to become a student of computer sciences in the Department of Automation at the Central South Institute of Mining and Metallurgical Engineering (the predecessor of Central South University) located at the foot of the mountain. He recalls, ‘The concept of a computer was completely alien to my family. They asked me what it was, and I said I didn’t know either. But I’ve always been a curious person, and I guess it was this sense of curiosity that drove me to choose the major.’ 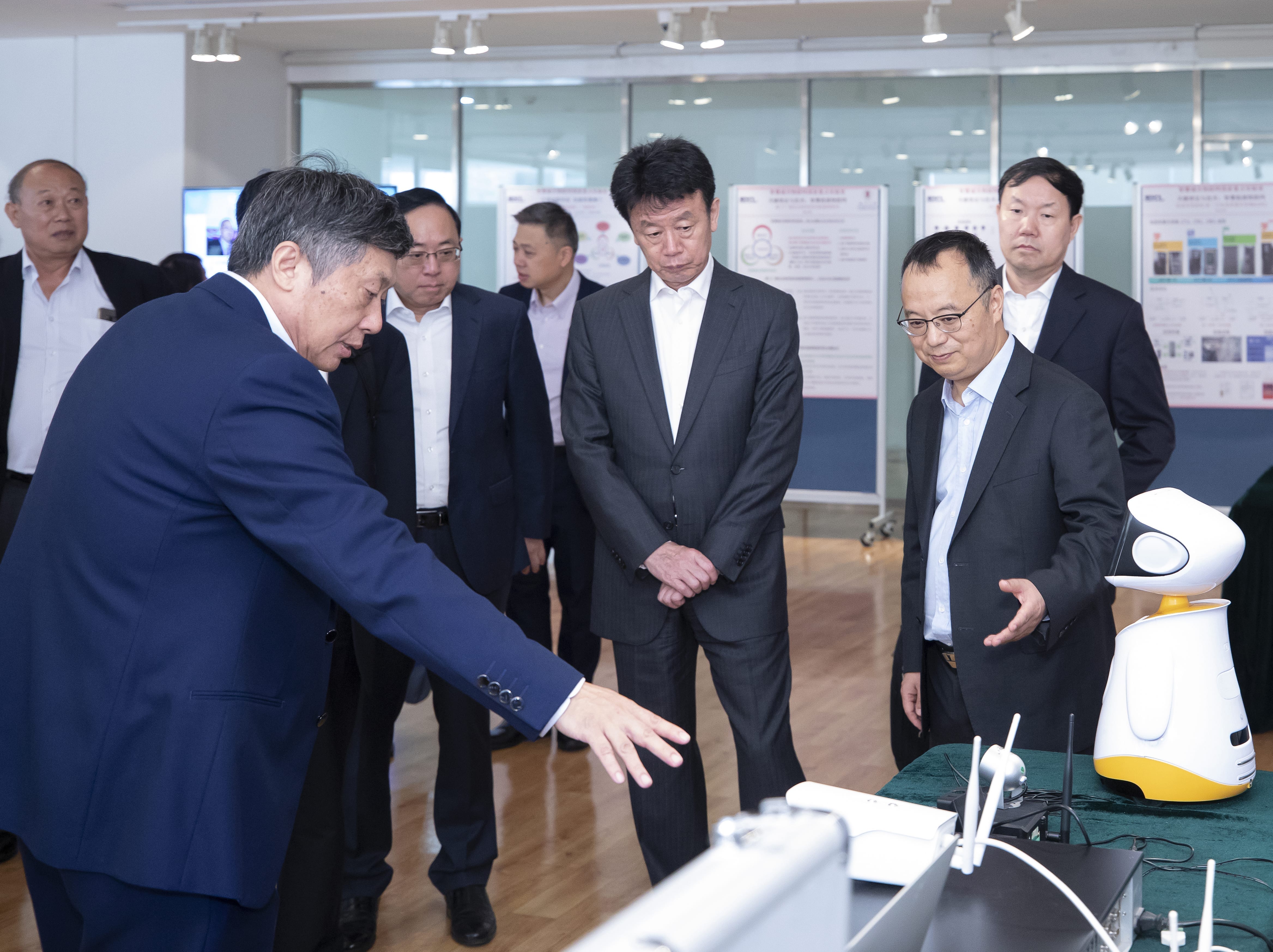 Photo on left page: Prof Yonghua Song (right), Director of the State Key Laboratory of Internet of Things for Smart City(University of Macau), and Prof Weijia Jia (left), report the latest development of the lab to Zhang Jianguo, vice minister ofscience and technology of China.

But interestingly for a computer major, Jia did not get a chance to see a real computer during his first year in college. At the time, computer technology was clearly not at the top of the government’s priority list. As a consequence, China lagged behind advanced countries in this area by at least ten years. Even Jia’s professors hardly knew anything about computers. They went to Beijing to see what computers looked like, attended training courses there, and compiled teaching material after returning from the trip. It was not until Jia was about to start his third year of study that the faculty introduced a DJS-131 computer, a model that was made commercially in Shanghai (DJS is simply an acronym for the Chinese words for ‘electronic computer’). That bulky machine used punched paper tape for data storage. In terms of computing power, it couldn’t even compare to today’s video game machines played by children.

The first time Jia saw a desktop computer was during his postgraduate years. He was asked to purchase a desktop computer for his faculty. So he and his colleagues took a train to Guangzhou and paid close to 6,000 US dollars for an Italian brand computer. The management of the faculty feared that the precious computer might be stolen or damaged during the 24-hour train ride, so they gave Jia and his colleagues special permission to complete the return trip by airplane. ‘That was the first time I ever flew on an airplane,’ says Jia with a smile.

After completing his master’s degree in 1984, Jia became a faculty member at his alma mater. Several years later, during his one-year stint at the University of Ottawa, Canada, as a visiting fellow, Jia learned about artificial intelligence and natural language processing for the first time. But back then, it was the winter of artificial intelligence. ‘At the time, AI couldn’t produce any value, mostly because early computers didn’t have enough computing power. And I couldn’t achieve any breakthrough, so I felt bad,’ Prof Jia says. During his final months in Canada, Prof Jia changed the focus of his research to object-oriented programming. To this day, he still laments that he failed to make the most of his stay in Canada, because he didn’t thoroughly study the two subjects. He later decided to study for a PhD degree at the University of Mons at Belgium and graduated in merely two and a half years. 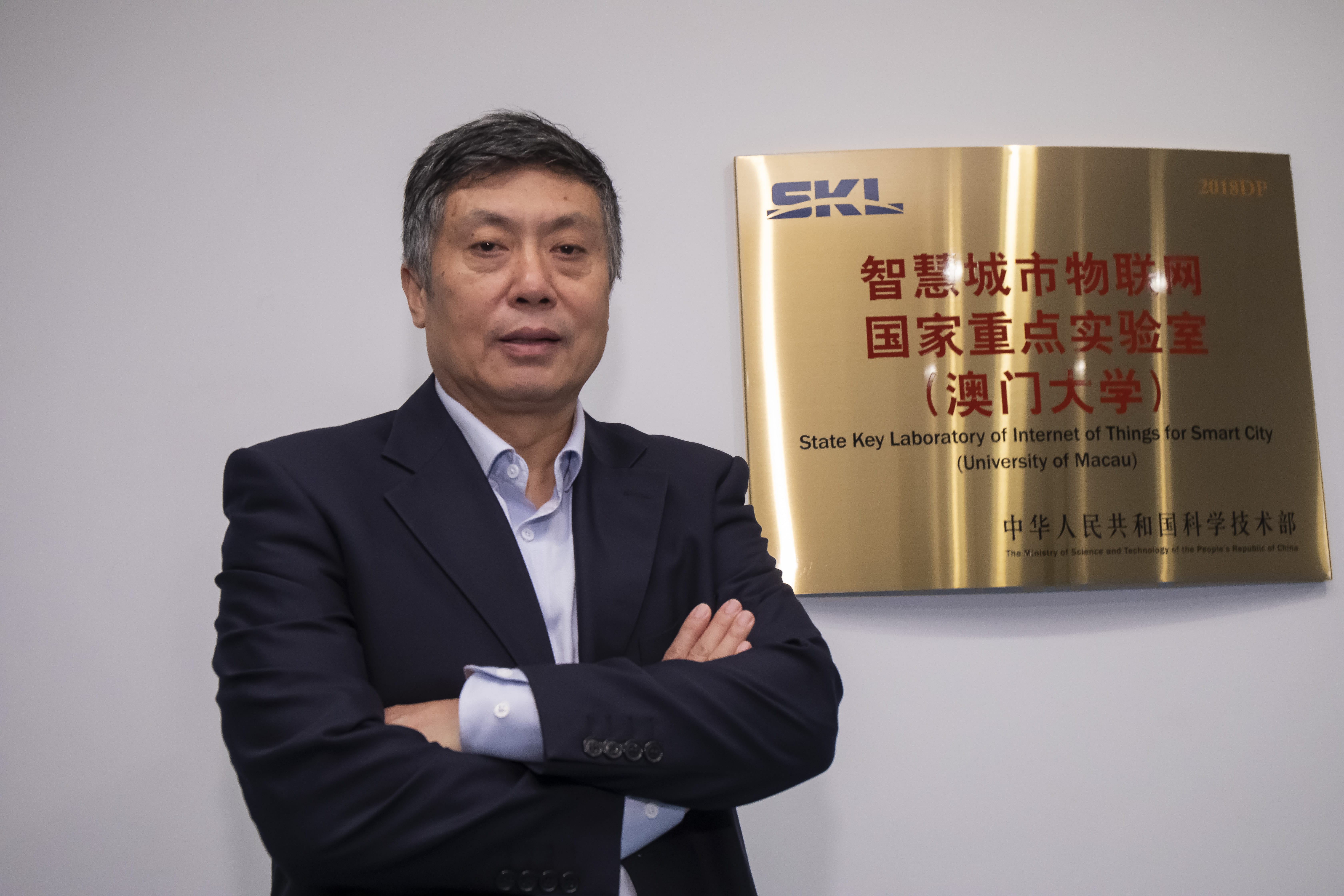 Decades of Research in Internet Communication

After obtaining his PhD degree in 1993, Jia stayed in Europe and became a post-doctoral research fellow at the German National Research Center for Information Technology. His team leader was just starting a project on network communication commissioned by the European Union, so he switched his research focus to this field and has never looked back. In 1995, he was appointed an assistant professor in the Department of Computer Science at the City University of Hong Kong. Later, he was successively promoted to associate professor and full professor. In 2014, he was appointed Zhiyuan Chair Professor at Shanghai Jiao Tong University. In 2018, he joined UM. Looking back on the past four decades, he feels that exciting new advances keep emerging in the field of internet. He says, ‘The internet has always been my research interest, so this is an area I will continue to explore. My current goal is to combine AI, big data, and the Internet of Things.’

Prof Jia’s main research interests include Entity Object Sensing through Cyberspace, Men-Machines-Things Knowledge Graph Completions and big data processing, next-generation wireless communication protocols, and the IoT. He is currently involved in eight national scientific research projects. He holds two patents from the United States and five patents from mainland China. He has published close to 500 papers in top-tier international journals and conferences. He is the author or co-author of 14 books. His research studies in Anycast routing protocol and matching networks have attracted widespread interest and attention. In 2017, his research project on theories and methodologies concerning resource allocation and management for distributed systems earned him a first prize in the Natural Science Award category from the Ministry of Education under an award programme in recognition of outstanding research achievements of scholars from higher education institutions. 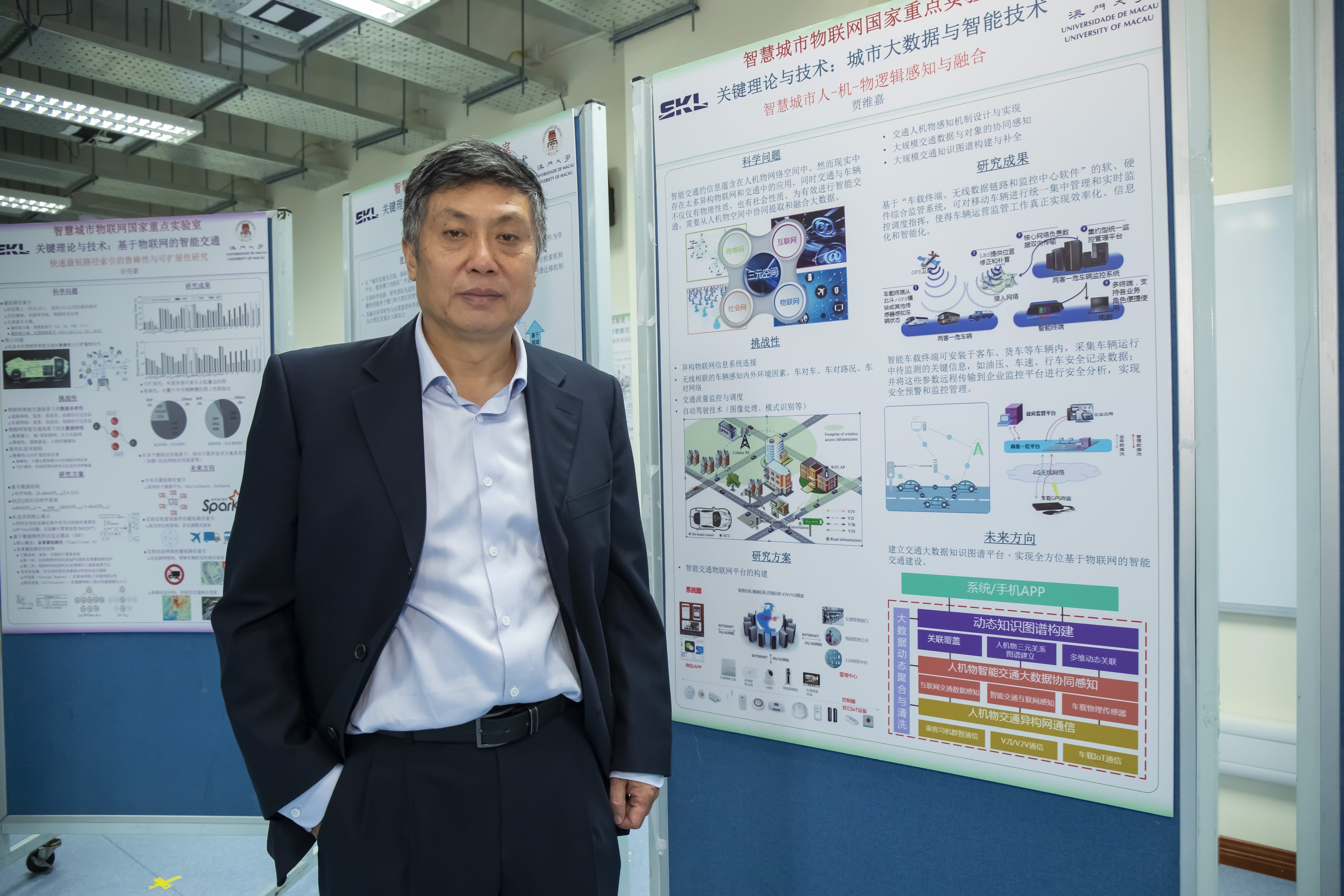 Assisting in the Development of a Smart City in Macao

Apart from being the deputy director of the State Key Laboratory of Internet of Things for Smart City (University of Macau), Prof Jia is also the head of the research team on urban big data and smart technologies in the lab. The team’s main research interests include theory and technology for multi-level, multi-mode intelligent sensing identifications, as well as theories and methodologies concerning network storage, transmission, and computing of disparate data. Created to serve Macao, the lab’s first priority is to initiate local projects with distinctive characteristics. The team plans to collaborate with telecommunications operators in Macao in big data processing. He says, ‘Applying big data in telecommunications can address several urgent issues, including crowd control, traffic control, and optimisation of the allocation of base stations, because the establishment of 5G network infrastructure is under planning.’

In addition to research, Prof Jia is also preparing for the launch of a master’s degree programme in data science in September of this year. The first interdisciplinary programme in big data in Macao, the programme will cover such areas as artificial intelligence, marketing, financial technology, precision medicine, and intelligent education, with the aim of promoting interdisciplinary application of big data and the integration of data science and big data applications.

According to Prof Jia, big data are inextricably linked to the development of a smart city in Macao. ‘I am working on Men-Machines-Things Knowledge Graph Completions. Every one of us produces and uses big data every day, without realising it, because nobody has taught us anything about big data.’ He points out that by integrating and analysing the big data produced in everyday life, we will be able to provide services that are more intelligent and better meet the needs of individual customers. In a smart city, various kinds of instruments and things can be connected via sensors, and their movement, consumption and use will generate a large amount of data. These data can be collected and analysed with AI technology to help us find the meaning behind the data. He explains, ‘For instance, we have sensors in our city to detect anomalies. By analysing such data with AI technology, we will be able to alert people pre-emptively.’

Nurturing Big Data Professionals to Meet the Challenges of Our Time

The integration of AI technology and big data has radically changed every aspect of our lives, including the career choices we make. Indeed, more and more people are now contemplating a career in information science. Having supervised more than 30 PhD students, Prof Jia believes that the globalisation of technology has created unprecedented opportunities for young people. He says, ‘A decade ago, face recognition was something I couldn’t even imagine. But today, in some mainland hotels, it is already part of a standard check-in procedure. I have supervised some students at Shanghai Jiao Tong University who are now running staff-less hotels in China. Once a customer books a room using a mobile application, she will receive a passcode for the room. This shows you how fast the technology is advancing with each passing day. ’

Prof Jia is a strict teacher. He always tells his students that it is not enough to merely like a subject; that they must work hard in order to stay competitive. He says, ‘The fast-changing world forces you to keep upgrading your knowledge. This is especially true in the field of information science. If you don’t move forward, you will fall behind. So I require my students to publish papers in top-tier international conferences and journals, because I think that’s the responsible thing to do as a teacher. If I don’t set high standards for them, one day they will regret, and I will also feel I have failed them.’