Skip to content
A Criminologist with Three Keys to His Life

A Criminologist with Three Keys to His Life

Text│Saohou Wong
Photo│Manuel Reis, with some provided by the interviewee

If you were in possession of three keys that can each open the door to a new phase in life, would you know when to use them? Prof Liu Jianhong from the University of Macau’s (UM) Department of Sociology is one man who clearly does. He had a steep climb up the ladder of success – from the ﬂoor of a tyre factory to the academic podium as an internationally renowned scholar of criminology. Winner of multiple awards, he received the 2016 Freda Adler Distinguished Scholar Award from the American Society of Criminology. Last year, he won the 2018 Gerhard O W Mueller Award, from the most authoritative body on the relevant discipline, the Academy of Criminal Justice Sciences, in recognition of his outstanding and longstanding contributions to comparative criminology and international criminology.

Born in Ningxia, Liu was swept up in the tumultuous Cultural Revolution at the tender age of 11. With all schools shut down, idle children fell into small gangs, picking fights and causing trouble. Liu, then a fifth-grader, was no diﬀerent. In one serious episode, he was taken to the Social Protection Department (now the Police Station). When he reached age 14, schools reopened. He did not resume his fifth grade studies, but leapfrogged to the eighth grade, because those in the younger age groups needed to be assigned to lower grades.
After leaving school, Liu was assigned to work in a tyre factory in Ningxia. But he refused to spend the rest of his life trapped in the 24-hour shift cycle of a tyre-production labourer. Boldly, he decided to teach himself the entire secondary school syllabus for mathematics, physics, chemistry, literature, history, as well as other subjects after work, which took him four years to complete. 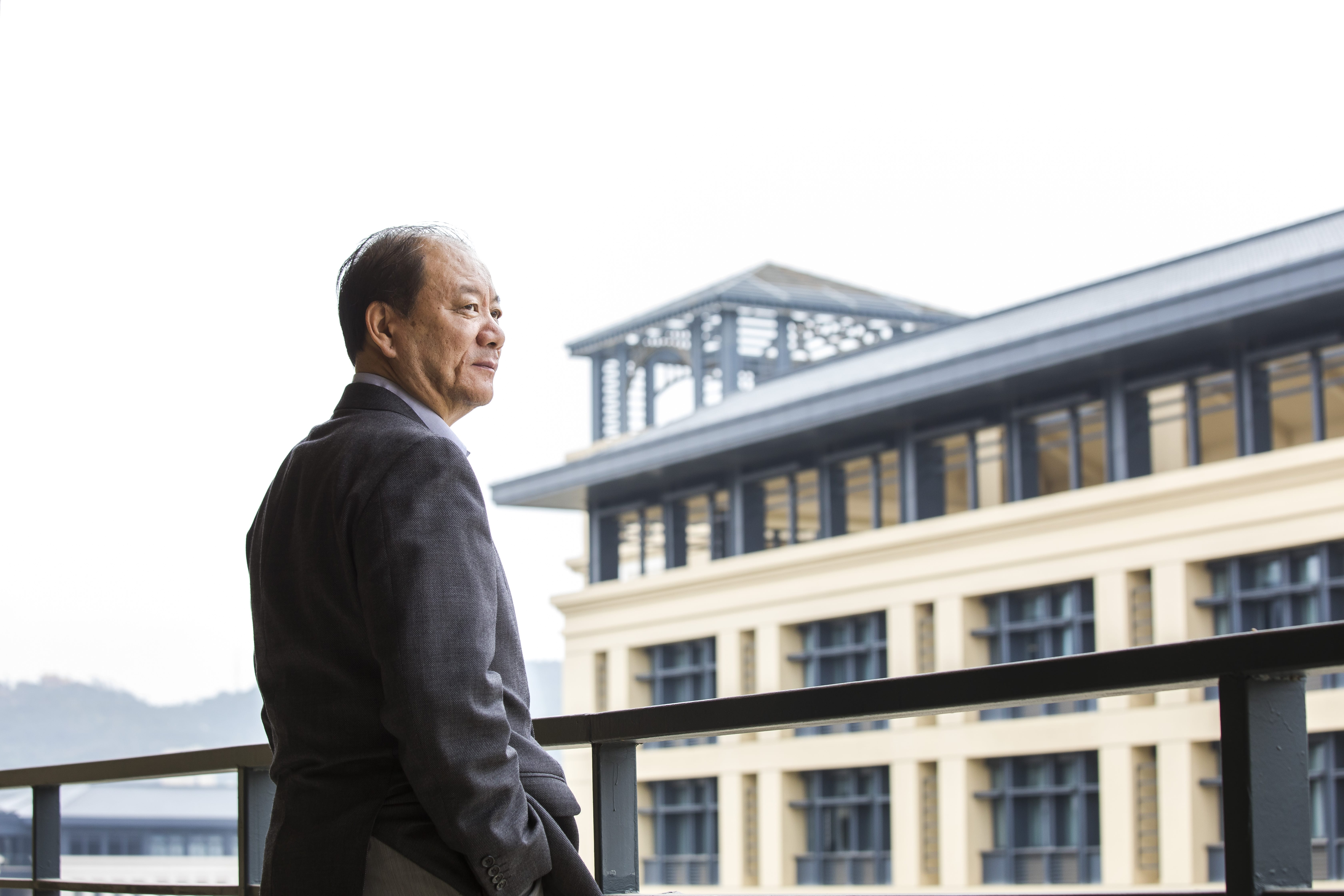 An ordinary rubber tyre may look simple. But multiple steps are necessary to manufacture one, from high-temperature heating, pressurisation, and sulfurisation, before it passes the test for resiliency, strength, wear-resistance, and anti-corrosiveness. In his factory days, Liu often reminded himself that, he too, must undergo the vigorous process of being tempered and molded into market-ready condition.

At that time, the only way to get into university is through recommendation by the work unit. In the only selection exam held in the factory, Liu was the first to finish all four exam papers, when others were still struggling with one. However, he was not recommended for college but was instead transferred to the school run by the factory.

After two years as a high school teacher, Liu’s lucky break finally came in 1977, when the then Vice Premier of the State Council Deng Xiaoping reinstated the college entrance examinations that had been mothballed for ten years. Millions of young people commenced a mad stampede to take the public exams. Liu, too, leaped at the opportunity. In doing so, he unleashed his dream that had been dormant and suppressed for a decade. He summed up that moment poetically, ‘Like tempered steel, hidden and unused / I burned with a desire to be of use.’ By gaining admission into the university, he cut the key that opened the door to a new life. ‘Those that got admitted into universities in 1977 and 1978 saw the opportunity as a miracle,’ says Liu. 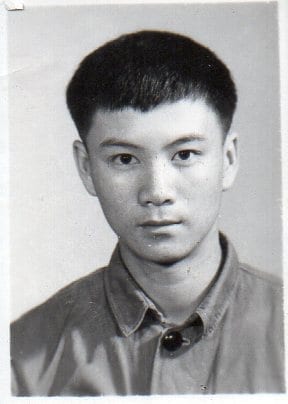 Prof Liu in his salad days as a tyre factory worker

From a Science Major to a Major Force in Criminology

Liu has won a clutch of awards and honours. He has been elected to many famous international criminological bodies. Notably, he also founded the most important scholastic exchange platform in Asia for criminologists—the Asian Criminological Society, of which he is the president. He is a prolific writer, with 29 books to his credit as author, editor, or co-editor, 71 journal papers (of which 48 are SSCI/Scoupus indexed), and 36 book chapters.

Liu’s undergraduate major was physics. Back then, students were sold on this slogan ‘Learn well your math, physics, and chemistry, and you can go anywhere without fear or insecurity.’ Liu too found himself in the grip of this fever and picked physics. Post-graduation, he discovered, to his disappointment, that career options in physics were severely limited. Physics was old school, with little room for career development. Without a lab for high-grade research, success was hopelessly beyond reach. Tough oﬀered a post to teach physics at Ningxia University, Liu turned his mind to an alternative career path. 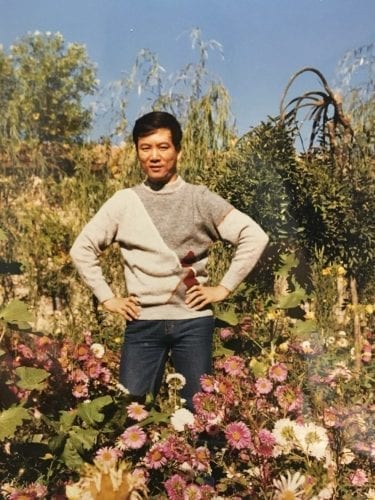 Prof Liu as a physics teacher at Ningxia University

Cutting a Second Key to Life

Proud though he was in making a quantum leap from humble tyre factory worker to lofty physics professor, Liu was far from content. He felt a diﬀerent inner drive. ‘Having come through the social upheaval of the Cultural Revolution, I had thought long and hard about various social and political issues,’ he says. ‘After two years of teaching physics, I decided to change horses midstream and applied for an MA programme in philosophy of science.’ Liu thus took a drastic turn–to a road not yet travelled, where he found unprecedented opportunities. In 1979, China and the United States established diplomatic relations, ushering in a honeymoon period between the two countries. ‘Nankai University invited many American experts to deliver talks, giving me a chance to get to know sociology,’ he says. ‘In 1988, I earned a full scholarship to study in the US.’

Driven by his hunger for knowledge, Liu switched from being a science student to a philosophy of science major, and then spent an additional ten years on another detour into sociology. But even then, academically, he still had not found his true love. Tis ceaseless search, however, led him to cut his second key that finally opened the door to a new opportunity. During his stay in the US, it was not until after he completed his PhD degree that he began to develop a romance with criminology. ‘The State University of New York at Albany was known as the cradle for criminology. Tat whiﬀ of intellectual excitement lured me into my lifelong interest in this discipline, just when I was writing my thesis,’ he recalls. Discovering criminology was his second key, the key to a veritable treasure chest.

He stayed in the US to dig deeper into criminology. He joined Rhode Island College in 1992, and spent 10 years there climbing the rungs from assistant professor to tenured full professor. But academic security alone did not satisfy him. He wanted more. He still burned with a desire to excel himself. The day before our interview, Prof Liu attended the inauguration ceremony for UM’s new rector Yonghua Song. He was visibly moved by what Rector Song said in his official speech, ‘A university must be driven by its dream, and feed its soul on excellence.’ Tis apt statement captures the essence of his own life journey. Had he not embarked on his scorched-earth pursuit of self-actualisation, he would probably still be toiling away in a tyre factory in his native Ningxia. 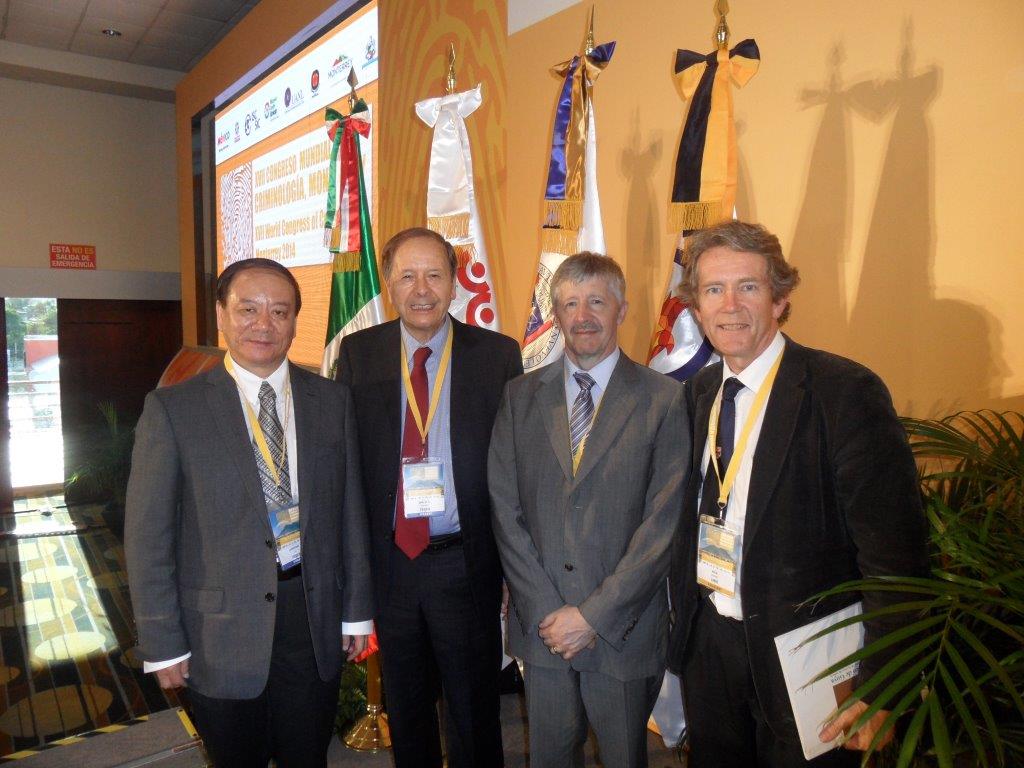 The Third Key– Returning to Asia

In 2007, the US was in the throes of a financial crisis. That same year, Liu came to UM as a visiting Fulbright Scholar. Near the end of his term, Faculty of Social Sciences Dean Prof Hao Yufan invited him to stay. That was how Liu left his comfort zone in the US where he had been ensconced for the past 15 years. By staying, he traded America for Asia.

In scanning UM’s growth prospects, Liu can see that there is a rich vein of opportunity for Asian criminology. He puts it this way, ‘Current criminological theories are invariably based on American research and model. Whether these theories apply to the Asian context is open to question. Case in point: East and West diﬀer significantly in prison studies. In the West, they focus on how to manage the prisons eﬀectively. In the East, they care more about how to rehabilitate the inmates, to prepare them for a new life. That’s why I feel there is plenty of elbow room for criminological studies to grow in Asia.’

In 2009, together with 50 experts and scholars from 14 Asian countries, Liu founded the Asian Criminological Society, with UM as its home base. That same year, he became the editor-in-chief of the Asian Journal of Criminology, which this year became the first and only journal on criminology in Asia to be included in the Social Sciences Citation Index (SSCI). 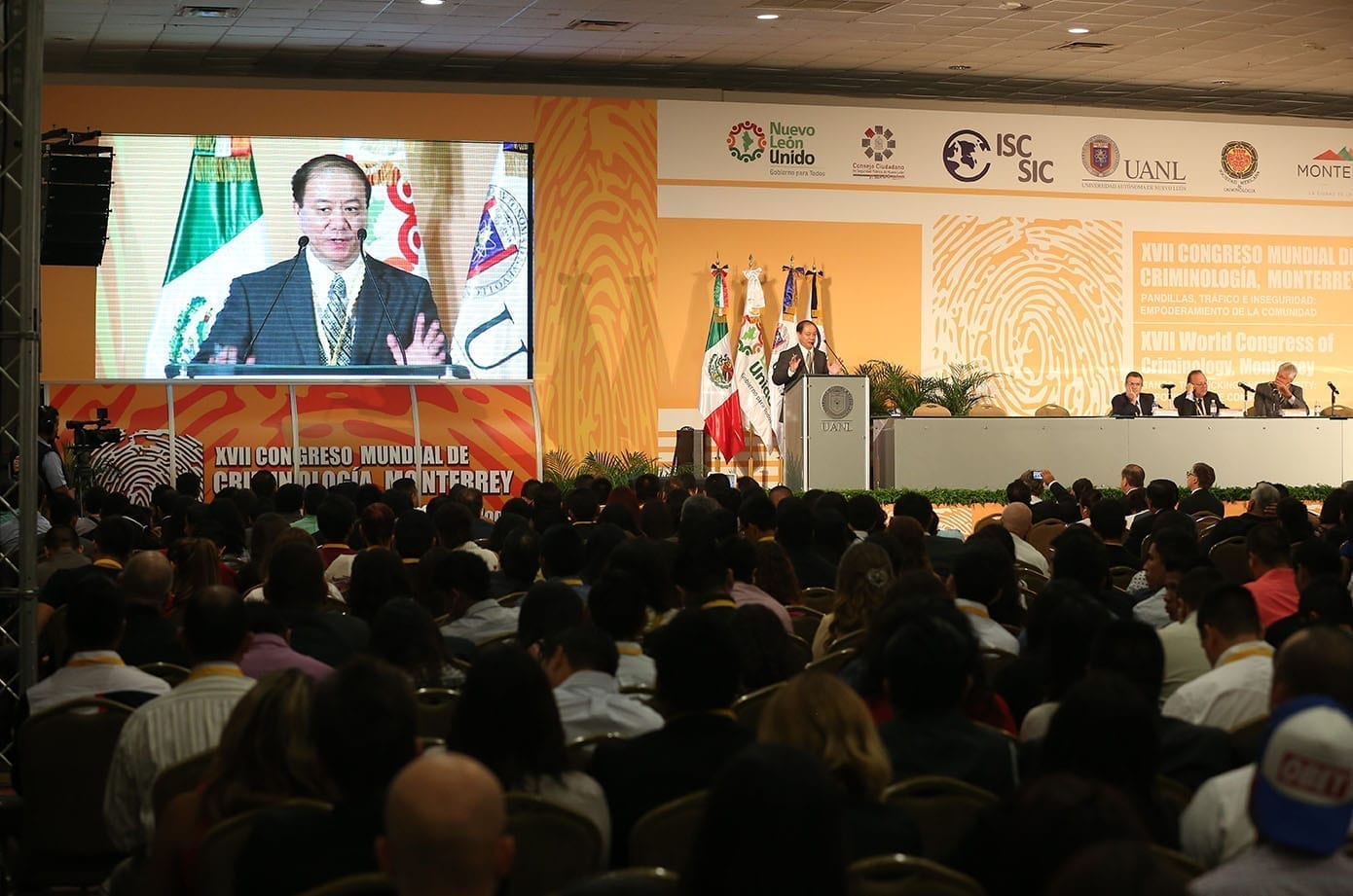 Prof Liu gives a speech at an international conference in Mexico

An important part of Liu’s work is in developing criminological theories that are applicable to both East and West. ‘Sociologists are fond of saying that socialization and the environment have an impact on human behaviour. Political scientists, on the other hand, like to say that social conﬂict, exploitation, oppression, and inequality are the true causes of crime,’ he says, ‘Criminologists are never short of criminological theories. As for me, I believe that one of my principal contributions is in advancing a ‘relational approach’ to the study of criminal behaviour.’ This is a new Asian paradigm which is predicated on the logic of cross-cultural comparisons. Existing theories in the West have largely ignored the importance of cultural diﬀerences on the study of crime and criminal justice, based as they are on the unchallenged assumption that theories gestated in the Western environment are universally applicable. Liu’s new relationalism perspective takes issue with this prevalent assumption. It posits that the relational approach explains criminal behavior and society’s reaction to criminal behaviour, of which the criminal justice system is one example, in ways that Western individualistic perspectives alone cannot. Since being published, his theory has been lauded by some famous criminologists. Liu is busy working to refine his theoretical model, so that it can better highlight the cultural perspectives of Asian and other non-Western societies. 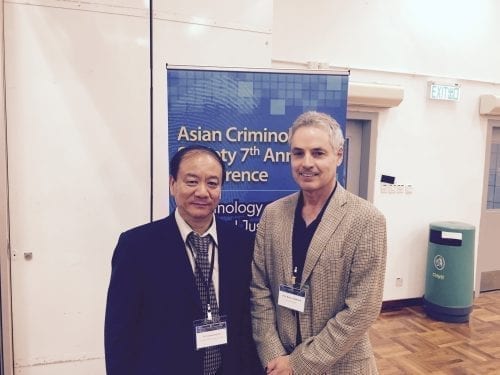 In bringing the interview to a close, Liu stresses that criminology is a work-in-progress and a never-ending pursuit, with enormous import for application. He hopes that by introducing this new paradigm internationally, it will make contributions locally. In the past, he points out, there has been relatively significant cooperation between the Macao government and the UM Faculty of Law. In the future, he says, ‘I hope we will enjoy more cooperative opportunities with our government on crime prevention in service of Macao.

Benefiting Society with the Fruits of Scientific Research

Centre for Innovation: A Platform to Support Faculty and Student Efforts to Start Their Own Businesses

UM’s Signature Courses to Be Launched on MOOC Platform