Skip to content
A Few Words on Theatrical Music

It has been said that music is the universal language of mankind, but the German writer Johann Wolfgang von Goethe also said that ‘music begins where words end’. It is not difficult to hear and feel the close affinity between poetic lilt and musical rhythm. Music expresses, so does literature. Literature narrates, so does music. Indeed, music and literature have long been received and appreciated as siblings throughout history.

Let’s pause for a moment: if I asked you to think about music and literature together, what sort of art form would come to your mind? musical? xiqu ? nursery rhyme? opera? oratorio? rap? country? symphonic poems? I’m sure you can think of other forms of artistic expression that bring together music and literature. And, let’s not forget, even songs without words can tell stories; For example, Romantic composer Felix Mendelssohn’s Liede Ohne Worte (Songs Without Words) is a series of lyrical piano pieces. Mendelssohn once stopped his friend Marc-André Souchay from trying to put words to the musical lines in Songs Without Words : ‘What the music I love expresses to me, is not thought too indefinite to put into words, but on the contrary, too definite ’ (note Mendelssohn’s own italics).

Starting from about 700 BC, ancient Greek drama had already combined both spoken words and musical lines, into which the element of dance was incorporated as well. Such form of multi-modal theatrical entertainment was much popularised in early modern London more than four centuries ago when England was known and celebrated as ‘the ringing island’. English playwrights at the time were keen to include musical episodes in their plays, especially when they wrote for theatre companies that had actors with decent singing voices.

Out of the 37 canonical plays of Shakespeare, the most-read Renaissance playwright, no fewer than 32 mention music in the text itself. They include more than 350 stage directions that are musical in nature. Shakespearean characters enjoy at least 50 song episodes, about 40 of which are full songs; a full song can be understood as a musical episode wherein the character concerned is meant to stop speaking and become a musical being. Why do they sing? What do they sing? 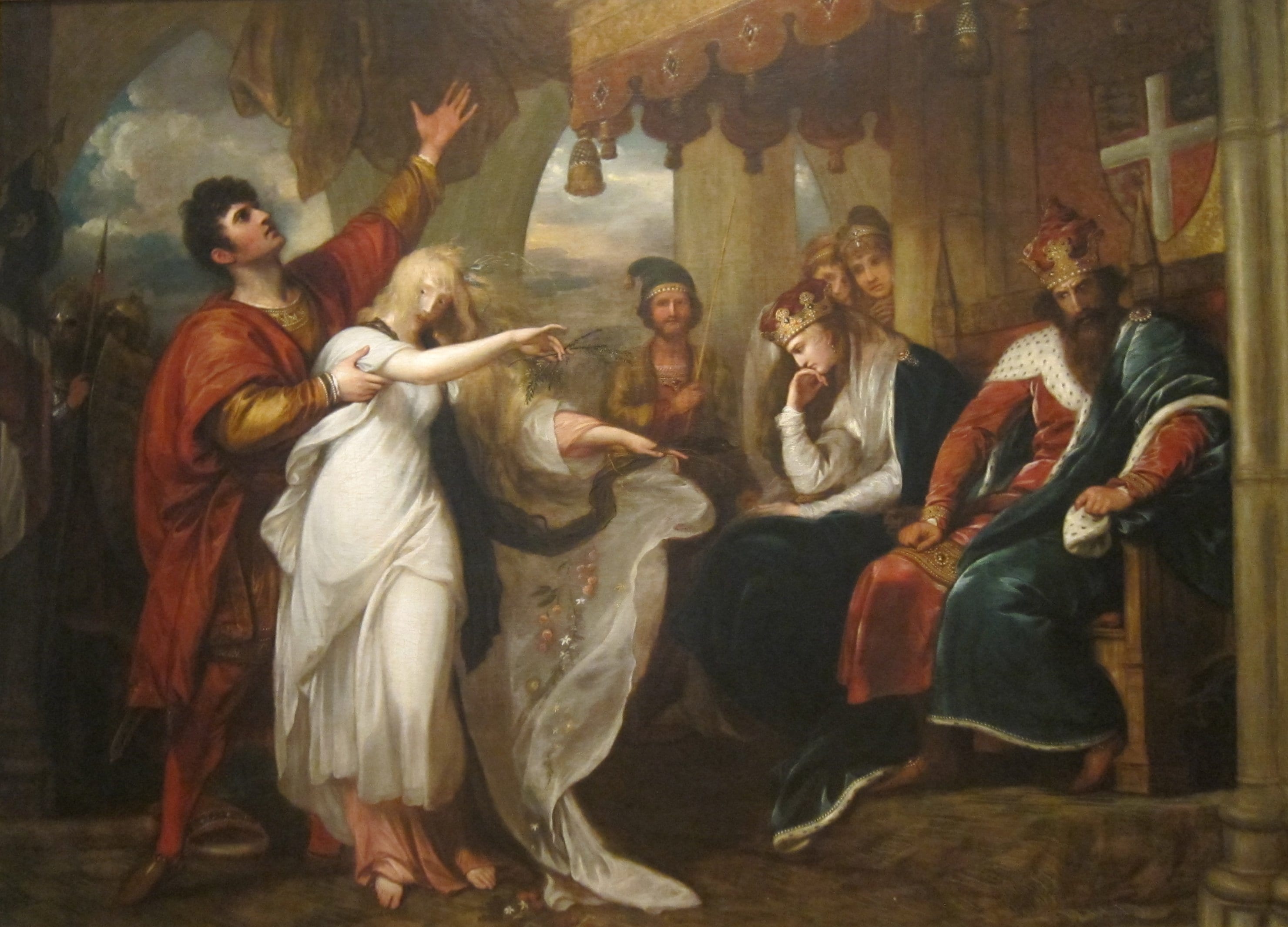 Ophelia before the King and Queen–created by Benjamin West (1792).

They sing when they work

Feste from Twelfth Night works as a fool in Duke Orsino’s household. Feste sings with his ‘mellifluous voice’ (2.3.51) at the bidding of the melancholy Duke who suffers from love sickness, but to no avail. In As You Like It, Amiens works as a courtier who entertains various characters’ song requests. Both Feste and Amiens can be viewed as human jukeboxes. In Hamlet, one of the grave diggers sings on the job. Sharing similar unease as the title character Hamlet, many a student have questioned the decency of such action. Mightn’t it be the indifference and boredom of his job that prompts this grave digger to sing? Also, the musical beats most likely would help propel the digging momentum; the act of singing, in this circumstance, is not dissimilar to oiling a machine.

They sing when they play with magic

Ariel, a delicate shape-shifter in The Tempest, sings and guides a shipwrecked young man to a designated spot where romance with a certain young lady will blossom. The young man considers the music of Ariel, invisible in this scene, as that which ‘waits upon / Some god o’th’ island’ (1.2.388-9). Shakespeare’s supernatural beings are often associated with music: fairies sing while pampering the transformed Bottom in A Midsummer Night’s Dream. 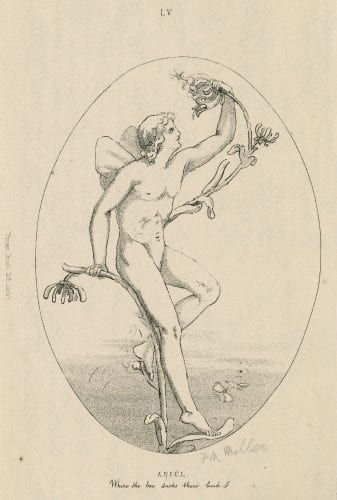 ‘Ariel: Where the bee sucks there lurk I’ –printed by Vincent Brooks (ca. 19th century).

They sing when they want money

Autolycus, a con artist in The Winter’s Tale, is possibly the most lovable Shakespearean rogue. His primary purpose is to serve as a musical icon that transitions the play from a bleak Sicilia and into a cheerful Bohemia. Earning his living
by ‘silly cheat’ (4.3.28), Autolycus sings when he picks and cuts ‘festival purses’ (4.4.614-15); he sings when he hawks his trinkets from village to village; and, more importantly, he sells his songs. Autolycus ‘sings several tunes faster than [one can] tell money’ and ‘utters them as [if] he had eaten ballads’ (4.4.185-7).

They sing when they want sex

The Renaissance canon is rife with characters who try to seduce each other with music, be it welcome or unwelcome. In Cymbeline, Cloten hires musicians to seduce a lady with music after he has been told to ‘give [the lady] music a mornings, they say it will penetrate’ (2.3.11- 12). He instructs the musicians to tune their musical instruments and encourages them so: ‘if you can penetrate her with your fingering, so: we’ll try with tongue too’ (2.3.13-14). In Cloten’s dictionary, good music is music that penetrates: ‘if this penetrate, I will consider your music the better’ (2.3.27-8). It is not uncommon for crass characters like Cloten to equate music-making and singing with sexual behaviours. 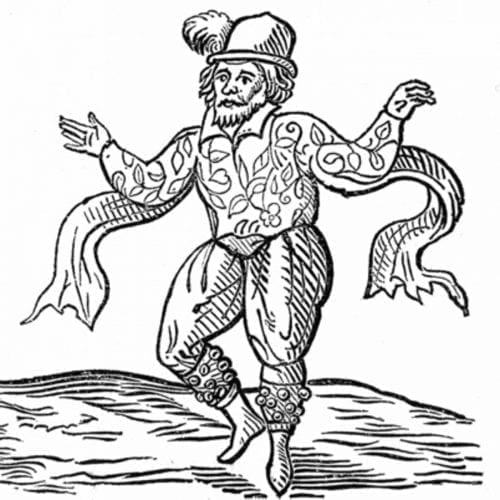 They sing when they drink 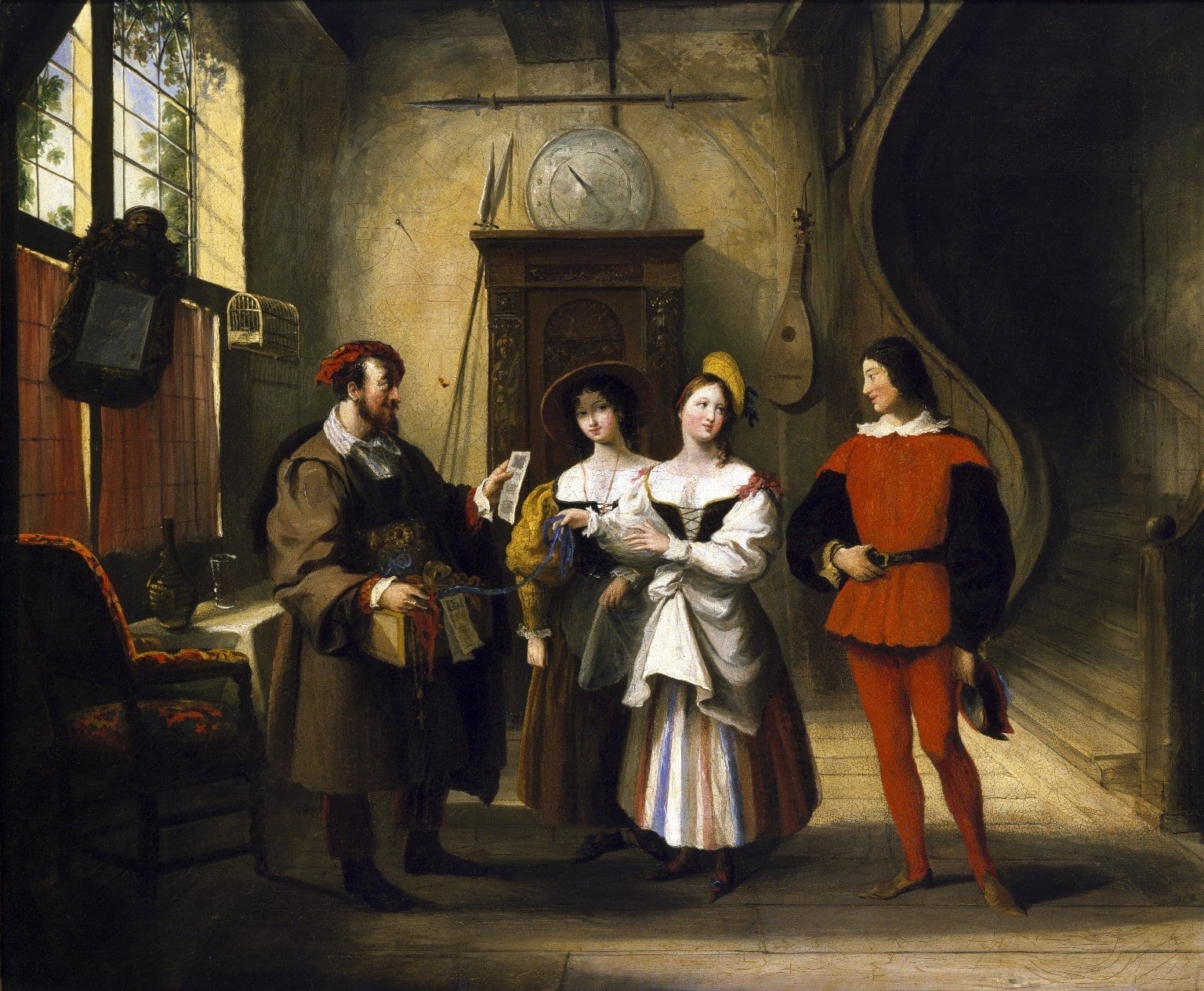 They sing when they’re mad

Ophelia, one of the only two women in Hamlet, is possibly the first female character in the whole Renaissance dramatic canon whose madness is exhibited through disjointed and, at times, indecorous songs. The Two Noble Kinsmen, a collaboration between Shakespeare and John Fletcher, presents a young lady, known as the Jailor¡¦s Daughter, who runs mad for the unattainable love of a young nobleman imprisoned in her father¡¦s cell. Like Ophelia, the Jailor¡¦s daughter, referred to by various characters as ¡¥a dainty mad woman¡¦ (3.5.66) and a ¡¥Pretty soule¡¦ (4.1.69), frequently breaks into singing. Her songs, most of which have now been identified as contemporary popular ballads, are full of sexual innuendoes. In King Lear, Edgar feigns madness and disguises himself as Poor Tom. He sings fragments of folk song as a protective measure when he is on the run from unjust punishment.

Taking into consideration the social decorum of his time, Shakespeare gave most of the singing episodes to servants (both adults and children), fools and rogues. Of course, like everything else, there are exceptions under exceptional circumstances (when one is mad or when one’s life is in danger, for example). Shakespeare’s contemporaries also experimented with similar musical expressions and representations, and more: secret messages are passed from one to another in an elaborate dialogue song in Thomas Heywood’s The Rape of Lucrece ; Florimell sings and dances most lasciviously in order to fend off her lustful kidnapper in The Maid in the Mill by John Fletcher and William Rowley; Merry thought in Francis Beaumont’s The Knight of the Burning Pestle believes in the goodness of music and keeps himself fit and happy by singing constantly, even when he runs out of food at home.

Have you managed to think of any everyday examples that function similarly to any of the above examples? Music surfaces and keeps us company more often than we realise. Before I finish, let me leave you with one final question: what do you think about Lorenzo’s view that any man that has no music in him nor is moved by music should never be trusted (The Merchant of Venice, 5.1.91-7)?