History is a fascinating enterprise which aims to sustain the widest possible interpretation of memory. ‘The Galleries: Sources, Voices and Histories’ – a permanent exhibition in the hallways of the Department of History, Faculty of Social Sciences, University of Macau (UM) – not only invites visitors to stroll through time, but also demonstrates how to understand and interpret voices that transcend time. This collaborative project, under the aegis of the Subcommittee on Education and Research, UNESCO Memory of the World Programme, aims to cultivate the greatest gift in students – curiosity.

Adopting cutting-edge and multi-perspective ways of presenting history and culture, The Galleries is a pioneer project that makes use of long hallways to allow visitors to savour the tranquillity of its well-embellished surrounding, whilst exploring the dynamic and diverse portfolio of historical research produced at UM. The exhibition presents findings from source-based research studies of the history of China, East-West interactions, and Southeast Asia and Maritime history, in chronological order, with an emphasis on the pragmatic usefulness of historical knowledge that goes beyond esoteric academic purposes.

The Galleries showcases various exciting journeys of detectives of time, who hunt through archival records and archaeological artefacts, seeking clues that might help construct a vivid picture of something which happened long ago. ¡¥Not only does it empower public connection with the past of our home city, The Galleries also introduces our students to the enthralling world of research on history in a wide range of perspectives, meanwhile making them realise the fact that solid outcomes could be only achieved through diligent efforts,¡¦ says Prof Wang Di, head of the Department of History.

‘This project shows how we [faculty members] conduct evidence-based research intertwined with thought-provoking queries and interrogatory skills,’ says Prof Wang. ‘And in some ways, it tells our students that it is of great importance to look at historical data in a critical manner so as to reconstruct a sound interpretation of ever-changing human cultures, politics, lifestyles, beliefs, and creativity.’ 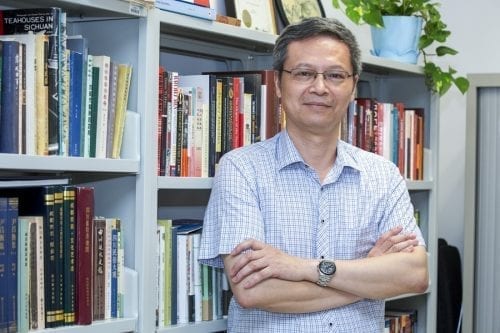 The Galleries is only possible because of the department’s impressive human capital – the carefully-selected and globally-connected group of renowned, competitive and innovative senior and junior scholars from mainland China, the
United States, and Europe. Their multi-lingual competence and distinct academic vision enables the team to undertake source-based research in Chinese, Japanese, Manchu, Latin, Portuguese, Spanish, Italian, French, English, Dutch and German.

‘The Galleries aims to transmit to our students the double role of a historian – scholar and artisan, who need to master multilingual and interdisciplinary skills to analyse archival materials,’ says Dr Beatriz Puente-Ballesteros, an assistant professor of the Department of History, a corresponding member of the UNESCO’s Subcommittee on Education and Research, and the designer and coordinator of The Galleries. ‘This exhibition explains that it is only by means of painstaking source-based research that historians can open new horizons of theoretical exploration that define, concretise and contextualise the extent of contacts on both sides of inter-civilisational encounters, but also give voices to marginal and marginalized actors,’ she says.

Based on these approaches, The Galleries narrates differentiated histories of China from the past to the present, with a special focus on East-West interactions: Macao studies; maritime history in the Age of Sail; the history of science, technology, medicine, maps and art; and the history of South and Southeast Asia. 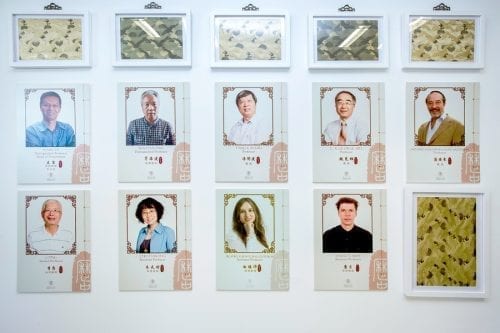 Historians with a multilingual background

Strolling through the hallways, one is reminded of the spatial arrangement of museums, where intriguing exhibits allow one to travel through time and space. According to Dr Puente-Ballesteros, the design of the exhibition’s conceptual dimension is inspired by the Renaissance Kunstkammern , which literally means ‘art rooms’, but are also known as ‘cabinets of curiosities’ or ‘wonder-rooms’. ‘Those “wonder-rooms” were conceived as a universe in microcosm in which the collector displayed his broad humanist learning by showing an encyclopaedic collection of objects mostly comprised of naturalia (products of nature), arteficialia (or artefacta , products of man), and scientifica (testaments of man’s ability to dominate nature),’ she says.

Playing around with these display concepts, Dr Puente-Ballesteros constructed a space of thematic and aesthetic encounters between China and the West, visually articulating the manifold activities carried out in source-based research from the Department. The formerly empty white walls of the long hallways functioned much like an empty canvas, on which professors could showcase their own Kunstkammer with objects and images related to their own research projects. The Galleries creates an inspiring promenade, displaying over 300 reproductions of images from archives and libraries all over the world, with information about the historical sources, including manuscripts of letters, archival documents, printed records, maps, drawings, illustrations, portraits, photographs, and posters. 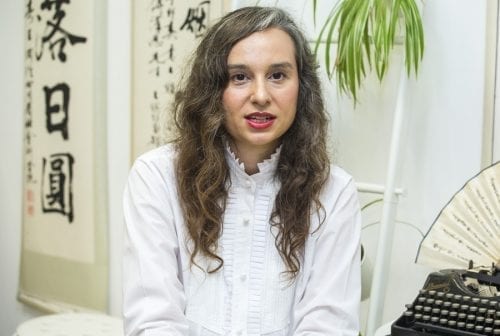 Sources are the voices of history — Dr Beatriz Puente-Ballesteros

The Galleries would not be complete without contributions from students. Thus, a prominent corner of The Galleries is reserved as ‘The History Students’ Space’ to inspire and motivate MA students and PhD candidates from the department to introduce their own research projects to other students’ and the general public. The theme varies from time to time, depending on the students specific projects. ‘This Space allows our students to examine thoroughly the history they are interested in, consolidate and analyse the collected data, and demonstrate their skills in laying out their research findings in an intriguing manner,’ says Dr Puente-Ballesteros. ‘I always say to my students that sources are the voices of history and therefore we must honour them by using rigorous interpretation and sophisticated methodological approaches from comparative, transcultural and global perspectives’.

An inspiring panel entitled ‘Beautiful Adverts: Cigarettes, Drugs and Wines’ by Deng Yingxin and Xue Hui, two graduate students from the department, offers their own explanation of how the Western conception of gender roles greatly influenced Chinese advertisements in the 1950s and 1960s, and how consumer culture shaped Chinese modernity. A substantial number of advertising posters and paintings of the time are collected and displayed as eloquent evidence, offering guests a glimpse of how Western advertising tactics conquered Chinese markets and marked the beginning of modern China. ‘We brought a lot of time-honoured advertising graphics that witness the aesthetics of Chinese consumers of the time,’ says Deng. ‘These posters were influenced by Western advertisements and were successful in advertising and giving recognition to the artists. From these commercial posters, you might see lots of portrayals of elegant young ladies dressed in cheongsam, sitting on a sofa, which were exceptionally popular and in some way reflected the social status of Chinese women at that time,’ Xue says. 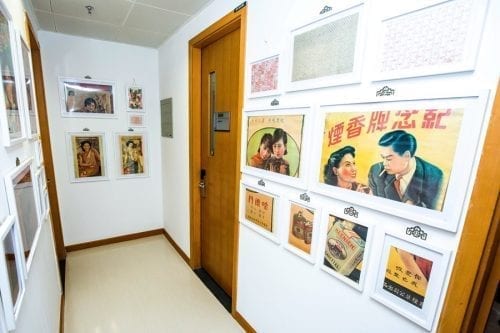 Te involvement of students in organising Te Galleries not only fosters a commitment to learning but also prepares them to be critical and well-informed global citizens. ‘Tese kaleidoscopic insights from my professors increased my curiosity,’ says Sheng Jia, a second-year history major, who contributed to the panels including ‘Macau: A Crossroad between East and West’ by Prof Tang Kaijian, and ‘Te Collapse of the Heavenly Dynasty’ and ‘the Construction of Modern China’ by Mao Haijian. For instance, a painting from View of Macau in China by Gaspard Duché de Vancy (1756 –1788) always impresses Sheng. ‘Just take a closer look at the harbour in this painting – just a few small fshing boats berthed there. Ten we compare it with the “thirteen factories” (Shisanhang) in Guangzhou during the same time period, where many vessels crowded there for trade. We could see that Macao was no longer a vibrant trading port from the mid-18th century onward, and there’s a lot more to tell [from the picture],’ she says. ‘Tere could be connections or contradictions when we put sources together. Analysing them systemically has been a big challenge,’ says Sheng. ‘In some ways, that’s how we verify the narratives and oﬀer more ways of interpreting history.’

Why Is Prof Ren‑He Xu Fascinated with Stem Cell Research?