Translating for the President of Mozambique

In 2016, UM sent 52 undergraduate and postgraduate students who are proficient in Portuguese to assist with translation and guest reception at the Fih Ministerial Conference of the Forum for Economic and Trade Cooperation Between China and Portuguese-speaking Countries (Macao). The experience provided the students with an opportunity to practice what they learned in the classroom in a real-life setting. Zhang Chen, a student from Beijing who graduated from the Master of Arts Portuguese Language and Culture – Applied Linguistics programme worked as a translator in Brazil after graduation. Apart from Brazil, he has also worked in three other Portuguese-speaking countries, namely Portugal, Angola, and Mozambique, in construction, machinery, agriculture, and business. At one time, he worked as an interpreter for the president of Mozambique. ‘Translating for the president was actually easy, because they basically just exchanged pleasantries,’ he says. ‘Translating for the ministerial conference was a different matter because there were more than pleasantries involved.’ 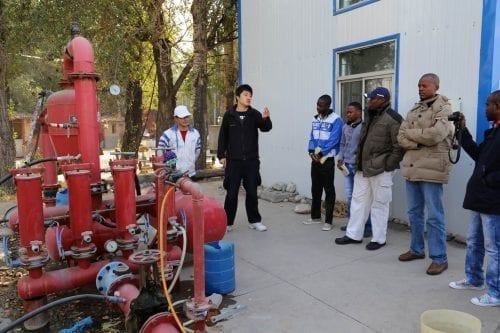 As he gained more and more work experience, Zhang felt he reached a plateau. ‘After working for a while, I felt the need to upgrade my knowledge, so I decided to pursue further studies at UM,’ he says. Zhang believes that it takes specialised knowledge and professional training to produce a competent translator. ‘For example, there are many Macanese in Macao who speak both Chinese and Portuguese, but very few can work as competent simultaneous interpreters. The teacher can impart all the skills, but it’s up to the student to perfect those stills. When it comes to translating, you will only get better if you keep improving your skills and gain more experience. ’ 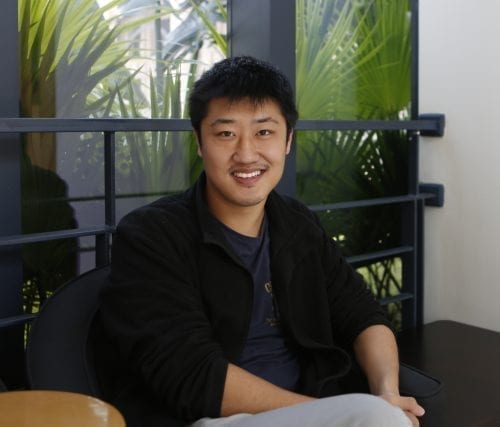 During the Sino-Portugal forum, Zhang was responsible for receiving the delegation from the Republic of Guinea—Bissau. ‘Some members of the delegation got sick, so I had to escort them to the hospital and translate for them, because most doctors didn’t understand Portuguese. For me, it was a very special experience,’ he says.

Wan Weng San, a Class of 2017 graduate from the Department of Portuguese, believes that Portuguese language is a tool which enabled her to learn more about the Portuguese culture. ‘Even just translating a few phrases would give me a sense of achievement,’ she says. ‘We have been given opportunities to participate in Portuguese-language activities since the first year. For example, we have attended the Lusofonia Festival and the Art Fair. We have also interviewed people from Portugal. ¬ rough these activities, I had the chance to speak with people from Portuguese-speaking countries and learn more about their cultures.’ Wan also attended the Sino-Portugal forum last year. In receiving government officials from the Republic of Angola, her interpreting skills came in handy. ‘I had learned most of the technical terms, so I was able to perform the task effortlessly. I remember one businessman from mainland China asking me to interpret for him and a government official from Angola, and I did. Although they only exchanged a few sentences, it still gave me a great sense of achievement.’

Wan says that although the Department of Portuguese does not offer a degree programme in translation studies, the well-designed curriculum still allows her to be exposed to different areas of the language, such as translation, education, and literature. ‘¬ is allows me to discover my interests first before deciding which career path I want to follow,’ she says. 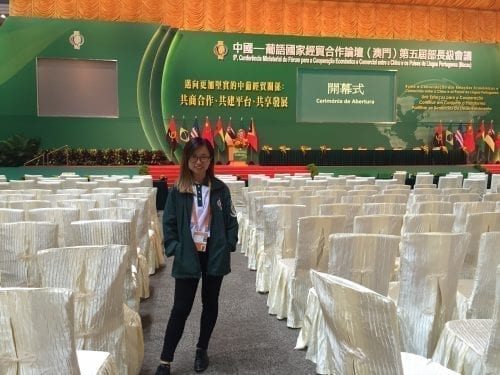 Sense of Achievement from Learning Portuguese

Wong Chang Chi is among the first cohort of graduates from the Department of Portuguese. He taught Portuguese in the Luso-Chinese Secondary School of Luís Gonzaga Gomes for ten years. Currently, he is the acting director of the Language Promotion Centre under the Education and Youth A airs Bureau (DSEJ). He feels the greatest gain from his four years at UM is that the experience helped broaden his horizons. ‘In middle school, I was too focused on rote learning to truly understand the deep meaning. ¬ e Department of Portuguese not only provides language instruction, but also helps broaden the students’ horizons.The flexible and open teaching method has had a great influence on my way of thinking,’ he says.

Wong studied in a Chinese middle school that did not offer Portuguese courses. It was only after he joined UM that he started to learn Portuguese from scratch. With the encouragement and help of his teachers and fellow students, he quickly caught up with the rest of the class. ‘Learning Portuguese has greatly boosted my self-confidence. After I started working, I won approval of my boss and got promoted because of my knowledge of the language. 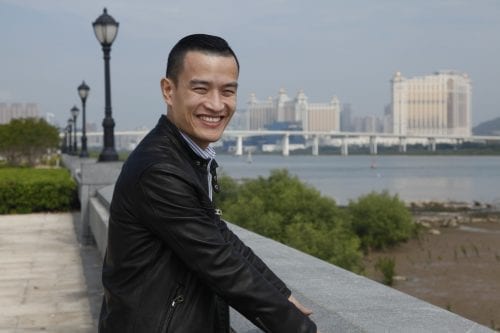 With many years of experience in learning and teaching Portuguese, Wong is keenly aware of the value and joy of being a Portuguese language instructor. ‘I have spent 14 years learning and teaching Portuguese,’ he says. It has become an important part of my life. Portuguese has brought me self-actualisation, a sense of achievement, and the realisation that an expert is simply someone who focuses on doing one thing really well.’ Now working in the DSEJ’s Language Promotion Centre, he hopes to do more to promote Portuguese in Macao.

Starting a Business in Angola

António Ip graduated from UM in 2009. After graduation, he and his girlfriend (now his wife) both received job offers from a company in Angola. So they decided to pursue a career there. In 2014, four years after their arrival in Angola, Ip opened a restaurant with his friends.

When they first arrived in Angola, the country had just entered a truce, with full-scale reconstruction underway. But this also brought many career opportunities for them. Thanks to their knowledge of Portuguese language, they quickly gained trust from local companies, and successfully built professional experience and networks. 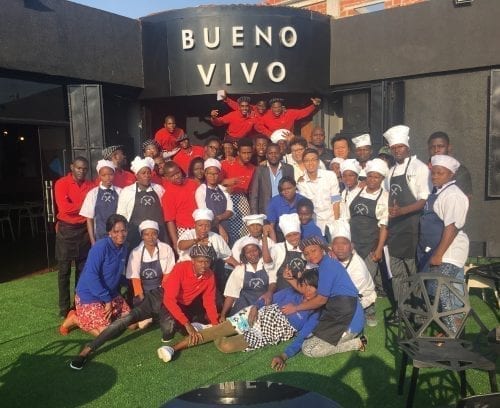 Ip believes that Portuguese language skills have beneted his career development. ‘I made the right decision to study Portuguese,’ he says. ‘Many people in Macao choose to study Portuguese because they genuinely hope to use their knowledge of the language to take their careers to the next level. Over 200 million people in the world speak Portuguese as their mother tongue, but only a handful are proficient in three languages. ¬ is means there is a world of opportunities for people who can speak three languages.’

‘UM students are very adaptable to change, which is their advantage,’ he says. ‘¬The university offers many internship opportunities to help students adapt to their work environment faster.’ He encourages students to travel abroad and see the outside world. He hopes to invite talented people, including current UM students, to join his company after he establishes himself in Angola. 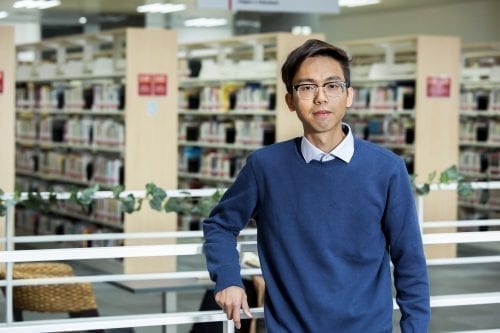 Yu Cong obtained her bachelor’s and master’s degrees from the Department of Portuguese. She is currently working in a state-owned electrical power company in Beijing as the Manager and Translator for Portuguese-speaking Countries, and is responsible for market development in those countries. Because of her work, she often needs to meet ambassadors, attachés, and other government officials from Portuguese-speaking countries. ‘I feel very lucky that the internship experiences I had while studying at UM helped me quickly adjust to my work environment, and allowed me to effortlessly handle the company’s relationships with various stakeholders, including key government officials,’ she says. ‘When I just graduated from UM, the biggest challenge for me was not about language; the biggest challenge for me was to learn everything about the industry from scratch. That is a lot to learn. And it is what I will be working to improve in the future. ’ 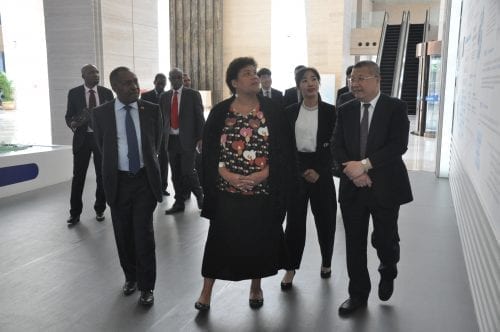 The main reason Yu chose to study at UM was because she foresaw that people who can speak both Chinese and Portuguese would be in great demand. ‘With the ties between China and Portuguese-speaking countries growing increasingly close, Macao as a bridge of communication is bringing more and more economic benefits and opportunities for both state-owned enterprises and private enterprises in different industries,’ she says. ‘As people become more and more aware of the opportunities in Portuguese-speaking countries, people who are proficient in both Chinese and Portuguese will have even more opportunities and choices. Mainland students who graduate from the Department of Portuguese also enjoy a strong advantage when they return to mainland China for career development. For me personally, Portuguese allows me to do many things that both interest me and are meaningful. Through Portuguese-speaking countries, I am beginning to have more communication and contacts with the other parts of the world, which has broadened my horizons.