Text│Saohou Wong
Photo│Manuel Reis, with some provided by the interviewee

Did you know that tree bark can be used to repair damaged skin? Based on classical theories of traditional Chinese medicine as well as modern biochemical and pharmacological evidence, the research team from the ICMS and the SKL-QRCM screened various Chinese herbs that are believed to relieve blood stasis and meridian obstruction by promoting blood circulation. The team found that the bark of Eucommia ulmoides (EU, commonly known as the hardy rubber tree) contains special molecules known as polysaccharides (a string of sugar molecules).  ese molecules in themselves do not promote cell proliferation, but they can help damaged skin tissue regenerate in a ‘smart response’ mode by ‘making friends’ with the growth factors in our body that are responsible for promoting the formation and maturation of new blood vessels.

Wang Chunming, an assistant professor from the ICMS, initiated this research project. Before joining UM, Wang focused on studies of biological macromolecules and tissue repair at overseas institutions, with a particular interest in the bioactive molecules in Chinese medicines and natural sources. Wang set his research team a challenging task: developing a way to repair human skin with tree bark. His team then spent two months collecting data. Eventually they found 15 Chinese herbs that were believed to relieve blood stasis and meridian obstruction by promoting blood circulation and tested them one by one, but none of them showed a satisfactory biochemical effect. ‘One day, one of my PhD students who was responsible for the testing came to my office. He cried and told me he wanted to discontinue this study, because he and the other students had spent a year and a half studying 12 Chinese herbs without getting anywhere,’ recalls Prof Wang. ‘But we finally achieved a breakthrough with the 13th herb. 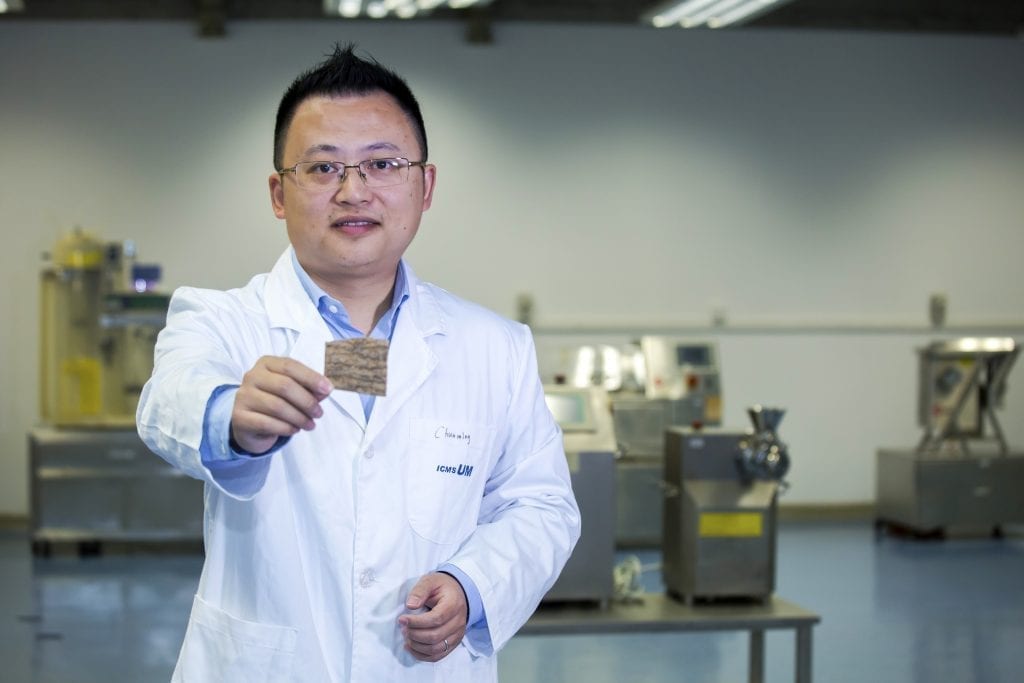 The herb that brought the breakthrough is EU, which is sweet in flavour and mild in nature. According to Shennong’s Classic of Materia Medica, it is mainly used to ‘treat lower back pain, improve the digestive system and immune system, strengthen muscles and bones, and enhance mental strength.’ According to the Compendium of Materia Medica, EU can ‘nourish the liver and kidney and treat back and knee pain’. UM’s research team found through biochemical and vivo experiments that a type of polysaccharides extracted from EU, known as the EUP3, have very interesting medicinal effects. First of all, EUP3 do not act like powerful pills, as was previously imagined. Rather, they are quiet molecules that do not exert an obvious effect on human cells in a non-traumatic environment. However, in the case of a trauma, EUP3 immediately spring into action, in the same way fire fighters respond to a re alarm. They bind and assemble growth factors that are responsible for promoting the formation and maturation of new blood vessels. By significantly stabilising, prolonging, and enhancing the effect of these growth factors, they improve tissue ischemia and promote tissue regeneration. The traditional way of treating a wound is by injecting exogenous growth factors into the human body to help skin regenerate, but these growth factors do not belong to the human body and therefore degrade quickly in the body. 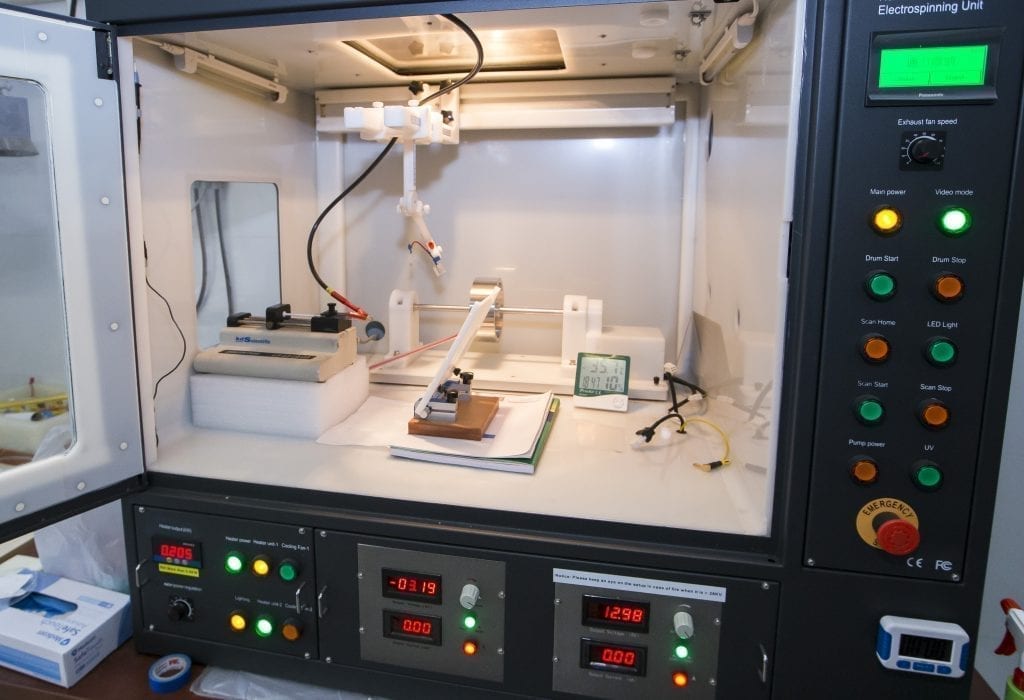 Moreover, Prof Wang’s team believes that there is no lack of these growth factors at the injury site of the skin. However, these growth factors easily di use and degrade. ‘The idea is to use biological tissue that is structurally similar to skin tissue and then mimic the mechanism through which skin repairs itself with growth factors. That’s why we tried to extract polysaccharides from EU,’ says Prof Wang. ‘In the wound healing process, glycosaminoglycans (GAGs) play a key role in enriching and promoting growth factors. Although EUP are not the same as GAGs, they can act as GAGs to help heal wounds. Compared to the synthetic or biological wound dressings currently used in many labs, EUP have a unique biological activity, which might help to reduce the chance of adverse reactions caused by exogenous growth factors. 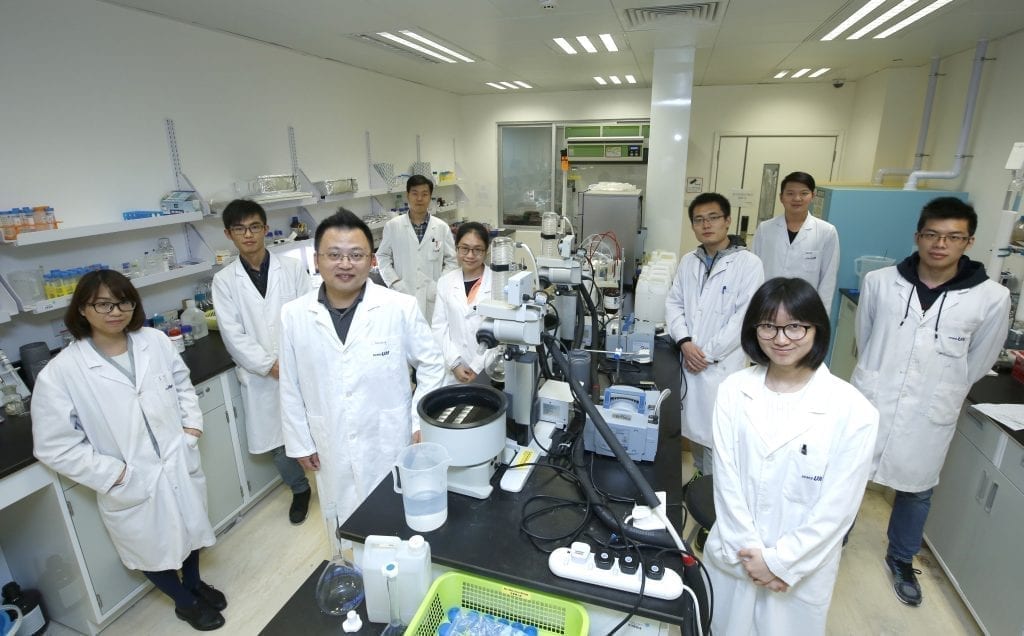 A wound healing process consists of three phases, namely the inflammatory phase, the proliferation phase, and the maturation phase. White blood cells congregate at the site of the damage and ‘eat’ damaged tissue cells by engulfing ng them, while simultaneously releasing substances to promote healing. As a result, the wound becomes red, swollen, and inflamed. After that, with the increased activity of white blood cells, vascular endothelial cells form new blood vessels. Concurrently, epithelial cells proliferate and ‘crawl’ atop the wound bed, providing cover for the new tissue. The size of the wound also decreases. In the end, a scab forms, and originally disorganised collagen fibres rearrange themselves. Redundant new blood vessels begin to contract and the wound heals.

Patients suffering from extensive skin injury or stubborn wounds can help the wounds heal faster and reduce the chance of infection by undergoing a skin grafting surgery using their own skin. However, a skin grafting surgery may cause new wounds or leave unsightly scars. This is where synthetic wound dressings come in. They keep a wound moist, accelerate healing, and leave fewer scars. The synthetic wound dressings currently used in clinical treatment are mostly made from tissue or collagen extracted from human skin or the skin of other animals. But the speed with which the dressings take effect varies from person to person depending on biological compatibility and the severity of the wound. UM-developed synthetic dressings are made from EUP. The natural herbal ingredients effectively accelerate the wound healing process. 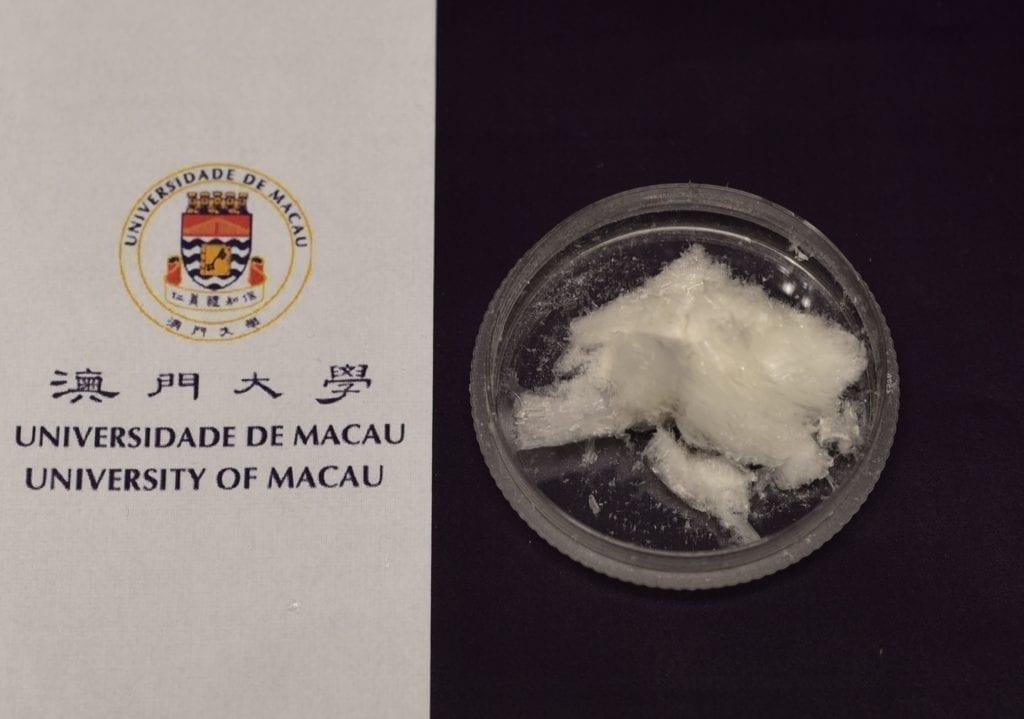 Currently, the team is working to develop new smart EUP-based wound dressings with nano-patterned design through electrospinning, a fascinating fibre fabrication technique, by combining advanced materials science and TCM-based preparations techniques. ‘EUP-based dressings are still in the animal testing stage,’ says Prof Wang. ‘When they pass clinical testing, we can weave EUP into any synthetic dressings to make them more like human skin. e growth factors can prompt the human body to kick-start its own repair process to accelerate wound healing and reduce the chance of adverse reactions.’ 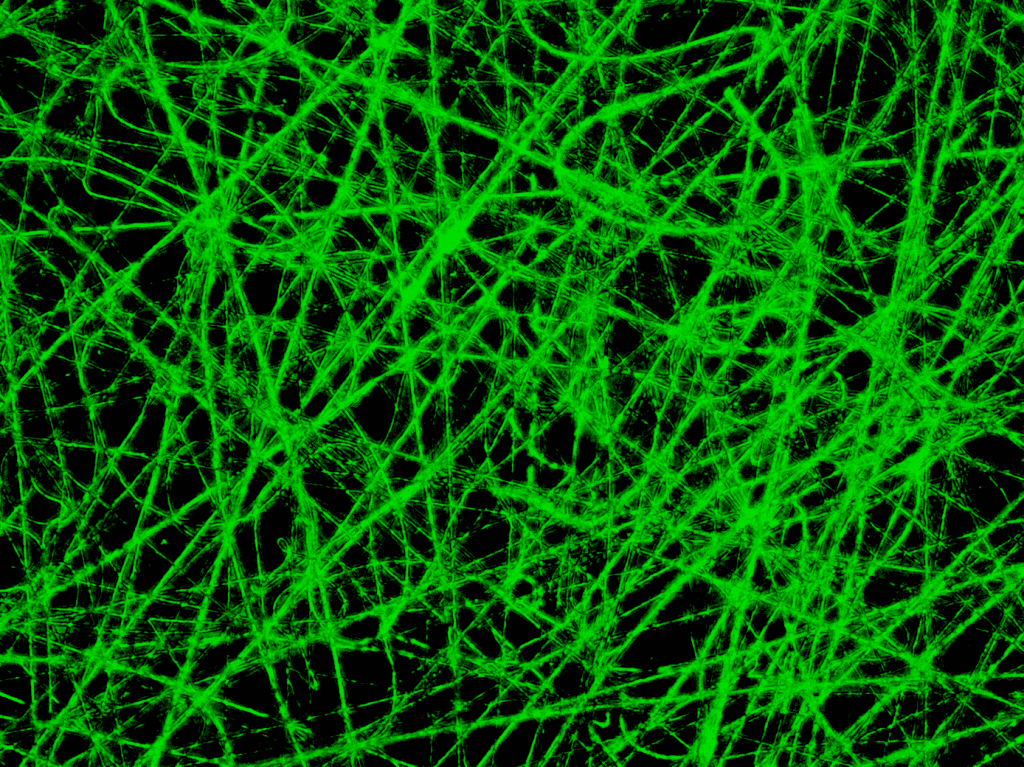 Electro-spun fibres that contain EUP under a microscope

EU-based wound dressings are developed by the ICMS’s centre for preparation engineering. Under the leadership of Prof Wang Yitao, director of the ICMS, the professors and doctors at the centre work together to develop innovative TCM-based drugs and health products, in an e ort to promote the development of the Chinese medicine industry in Macao. 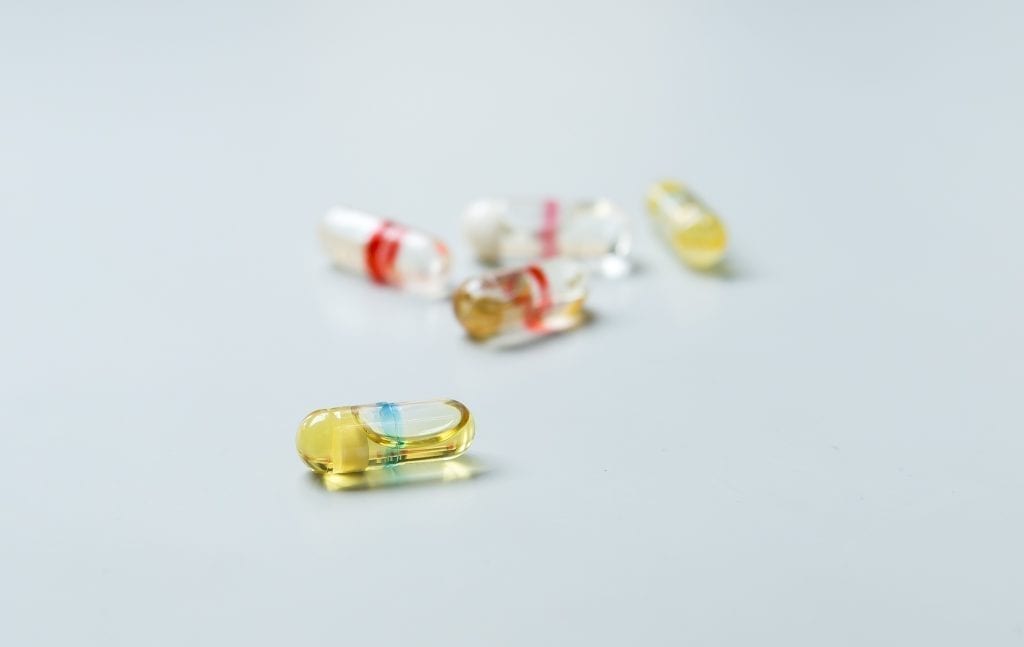 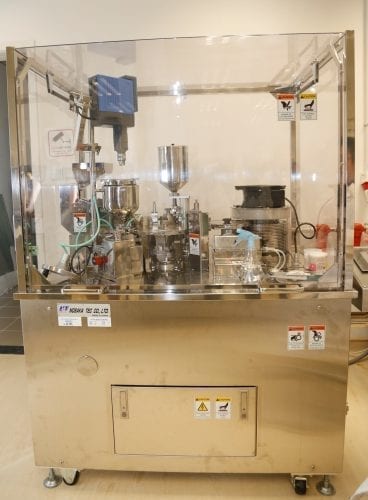 In 2014, President Xi Jinping visited UM and listened to Prof Wang explain how the multi-phase capsule filling machine worked. President Xi was very pleased with UM’s progress in Chinese medicine research. During his visit, President Xi expressed his hope that the ICMS would make new contributions to the implementation of China’s innovation-driven development strategy. 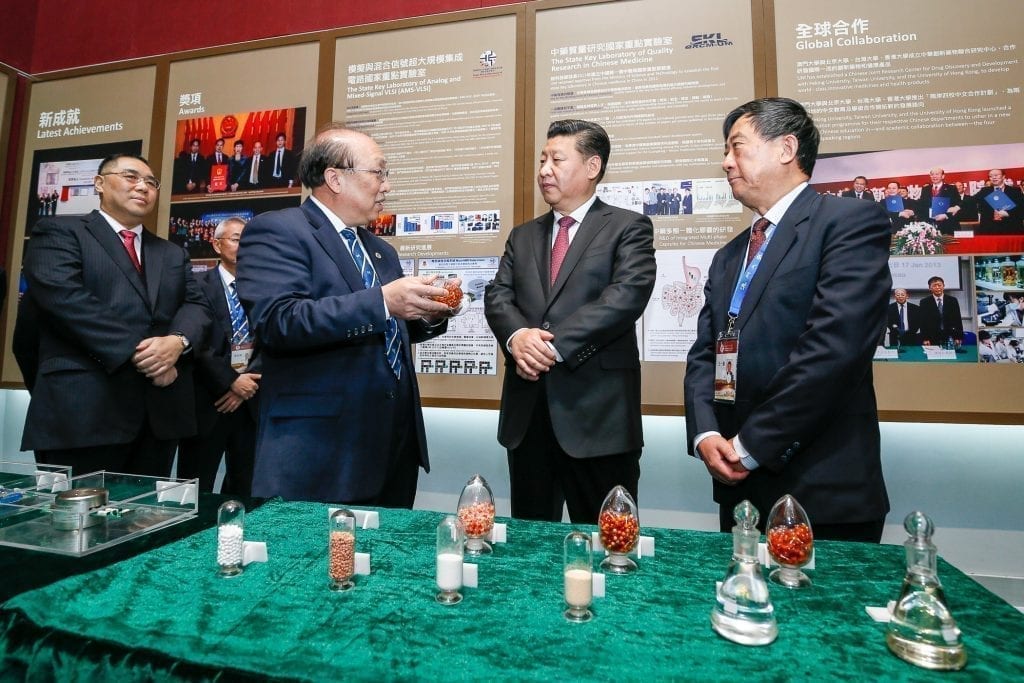