Due to rapid economic and technological development, the scale of our infrastructure has increased dramatically. For example, skyscrapers can be almost one kilometre tall. Furthermore, newly-invented materials and structural member types complicate structural behaviour. Traditional types of human investigations are costly and they have various limitations. In particular, non-destructive testing methods for the determination of concrete compressive strength are popular, but they can be used to determine the concrete strength of a localised area only. For large-scale structures, it is difficult, if not prohibitive, to test all positions of the structure. More recently, other advanced technology allows the acquisition of the very tiny vibration response of structures. Such vibration is of the order of 10-5g or 10-6g, that is one of a million of the gravity acceleration. Nevertheless, the problem is very challenging because such response is very random.

Structural health monitoring (SHM) is an automated strategy to diagnose if a structure is in its healthy state, and it has attracted tremendous interest in the last few decades. In particular, there have been important advancements in the past decade due to rapid development in sensor technology and data acquisition systems. There are four major goals in SHM: (1) to indicate if there is any damage to a structure; (2) to determine the location(s) of the damage(s); (3) to estimate the severity of the damage(s); and (4) to evaluate the reliability of the entire structure due to possible damages.

There are two major approaches of SHM: static and dynamic. For static approaches, usually the strains of different locations of a structure (especially bridge) will be measured and they will be judged on whether or not they are unacceptably large compared with the normal thermal expansion. However, a major problem of this approach is that strains depend directly on the force or excitation exhibited to the structure. Therefore, the values of strains may reflect only the change of loading conditions instead of the health status of the structure. Furthermore, the strain measurements are also localised quantities. 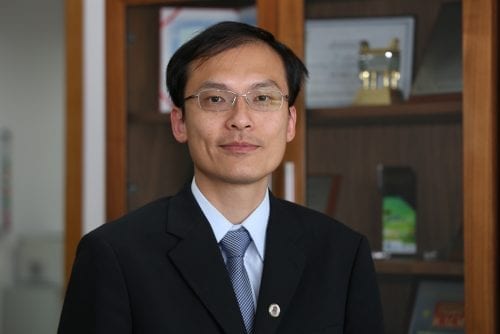 Prof Kelvin Yuen is the registrar and professor of civil and environmental engineering at the University of Macau. In 2002, he received his PhD in civil engineering from the California Institute of Technology (Caltech) after a study period of two years and seven months. He is an academic great-grandchild of Prof George W Housner, known as the father of earthquake engineering. In 2010, he became the first UM staff member to be promoted to the rank of full professor before the age of 35.

For the dynamic approach, the idea is similar to pulse checking but substantially more difficult. Instead of evaluating if the vibration magnitude of the structure is too large, this approach attempts to investigate the time-frequency content of the response. For instance, if one clicks a cup, a specific c sound frequency will be generated and this frequency is insensitive to how hard the cup was hit. However, if the cup is cracked, the sound frequency will change. In particular, the location, and the length and depth of the crack, will result in different change of such frequency. Nevertheless, the problem in structural health monitoring is far more complicated because the dynamic loadings (ground motion, wind loads, sea wave, traffic induced loads, and so on) are random and usually cannot be measured. Furthermore, the scale of civil engineering structures is huge, especially for those necessary for the structural health monitoring scheme.

In the dynamic structural health monitoring system, sensors (usually accelerometers) are mounted at different locations on the underlying structure. Since the important frequency band of typical structures is from 0.1 Hz to 20 Hz, the sampling frequency will have to be 100 Hz or above in order to have sufficient description of the response, ie to measure 100 times or more within one second at each location.

Another difficulty lies with the large number of unknown parameters to be identified, since there are numerous components in civil engineering structures (such as, say, a bridge). We know that we need to have at least the same number of equations to solve the unknowns. In our problem of structural health monitoring, such equations are obtained from sensors located on the structures. In this case, we may need a huge number of sensors but this induces both cost and computational burdens.

On 23 October 2015, a ship struck the Kap Shui Mun Bridge in Hong Kong. The bridge was closed for about 1.5 hours. Since it is a critical line to the Chap Lap Kok Airport, the economic loss of this incident was huge. Therefore, if a structural identification can work in a real-time fashion, it can help identify whether or not the structure is safe almost immediately, instead of closing the bridge and conducting an investigation by engineers, or by other offline structural identification calculation.Is will be very useful from the point of both safety and economic concerns. However, real-time structural identification is a very challenging problem. First, the scale of civil engineering structures is huge so one can expect a very complicated finite element model is necessary. Second, since the sampling frequency is usually hundreds Hz, it is straightforward to imagine the difficulty in updating a huge structural model several hundred times every second.

One important problem is to select a proper class of models for the purpose of structural health monitoring. Is sounds to be a simple problem but it is indeed much more difficult than it looks at first glance. For instance, let’s consider a simple problem for the sake of explanation. Imagine a student, called student A, who takes a physics class and learns F=ma. In the laboratory section, he conducts experiments and obtains 10 data points. Then, he uses EXCEL to fit a line to obtain the constant ‘m’ to determine whether or not it matches with the mass. Unfortunately, student B does not attend the lecture, and therefore when he conducts the experiments he does not know the formula F=ma. He then uses EXCEL to t a parabola, ie, second order polynomial. It turns out that his data fitting is better than student A because a parabola offers more flexibility to t the data better. Then, student C does the same but with a ninth-order polynomial. Guess what? She got zero error because this polynomial, with ten adjustable coefficients, can go through all ten points exactly. However, a ninth-order polynomial is very bumpy and it is by no means a good model for prediction in this case. What can we learn from this story? We cannot select a class of models solely due to the fitting errors. In general, a class of models with too many adjustable parameters has great power in fitting the details of the data, including the noise, but this will lead to the so-called over-fitting behaviour. Such models are not reliable for future prediction.

Beck and Yuen (2004) presented the first paper to tackle the model class selection problem in the area of structural health monitoring. Is problem is particularly difficult in this field due to the large number of unknowns, the unavailability of the excitation measurements, and a high level of uncertainty in civil engineering structures. In this paper, model complexity was quantified and the model class candidates are ranked according to the trade off between the model fitting power and its complexity, which is a measure of the model robustness. Model robustness is a very crucial indicator of the performance of a model class because it represents how fragile a model class is in resisting modelling errors and other uncertainties. Is paper received tremendous attention, even from researchers in other areas such as chemistry, physics, electrical engineering, education measurements, medical science, and materials science. It was ultimately listed as one of the top ten cited papers among several thousand papers published in the long history of the Journal of Engineering Mechanics of the American Society of Civil Engineers.

Recently, we extended this work to consider a more challenging problem to select the model class in the real-time manner (Yuen and Mu, 2015). The problem is difficult because the data acquisition time interval is usually 1/200 or 1/500 second. In other words, we have to finish model class selection and parametric identification 200 or 500 times per second. Is paper proposed an important foundation to build reliable real-time structural health monitoring systems. Due to its importance, it was published in the Computer-aided Civil and Infrastructure Engineering journal, which is ranked the top among 126 SCI/SCIE indexed civil engineering journals. More importantly, it was the second most cited paper among the over 120 papers published in the same period. 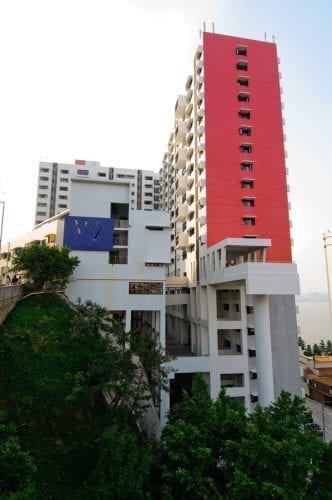 Monitoring of the East Asia Hall on the Old Campus

On the old UM campus, we monitored the East Asia Hall round the clock for about five years. We investigated how environmental conditions (temperature and humidity) affect the long-term structural behaviour (Yuen and Kuok, 2010). Furthermore, we also studied the extreme behaviour under a number of severe typhoons. We participated in the National Challenge Cup in 2009 and won the first-class award, which was the first time this award was won by scholars in Macao. We were also invited to conduct an investigation of the Ting Kau Bridge (Kuok and Yuen, 2016).