Skip to content
Why Just Give Fish When You Can Teach the Art of Fishing? Interview with Emeritus Professor Tang Keng Pan

Text│Tony Lai (Stringer)
Photo│Eric Tam, Ella Cheong, with some provided by the interviewee

Learning classical Chinese can be mind-numbingly boring. Or, it can be straightforward and fun, if you are a student of Tang Keng Pan, a professor emeritus from the Department of Chinese Language and Literature at the University of Macau (UM). By incorporating his latest research findings and interesting real-life examples into the classroom, Prof Tang turns an otherwise mundane learning experience into an educational treasure hunt, in which the students are not just spoon fed information, but are taught how to discover answers on their own.

Prof Tang’s office is like a mini-library, with every corner chock-full of books. Among his treasured collection are ancient and contemporary Chinese books, his own published books, works published by his students, and out-of-print books. An avid reader and independent thinker, he has insightful views on just about any subject, from the writing style of the Ming dynasty writer Pu Songling to the meaning of the words on a stone memorial arch at A-Ma Temple, a UNESCO World Heritage site in Macao.

When he was young, Tang excelled at science subjects and could have pursued a science major in college. But because literature has always been his greatest passion, he chose instead to study at the Department of Chinese at Sun Yat-sen University. After graduating from the university in 1967, he worked as a Chinese teacher and pursued further studies simultaneously. Later, he joined UM. Having now worked at UM for 23 years, he considers the university to be his second home. ‘I started here as a lecturer. Thanks to the trust and support of the university, I was promoted to assistant professor, associate professor, full professor, PhD supervisor, and now an emeritus professor,’ he says.

Since joining UM, Prof Tang has published 32 books, some of which he co-authored with his students. These books cover a wide range of topics, including dialectology, philology, exegetics, phonology, writing, and Macaology. His books and papers have won numerous national and international prizes. In 2014, he received the first Research Contribution Award in Practical Writing from the Association of Chinese Practical Writing. In addition to being a prolific writer, he has also supervised 28 master’s students and two doctoral students, including the first doctor of linguistics in the Chinese department. In 2012, he received the Medal of Merit-Culture from the Macao SAR government, in recognition of his outstanding contributions to Chinese teaching and research. 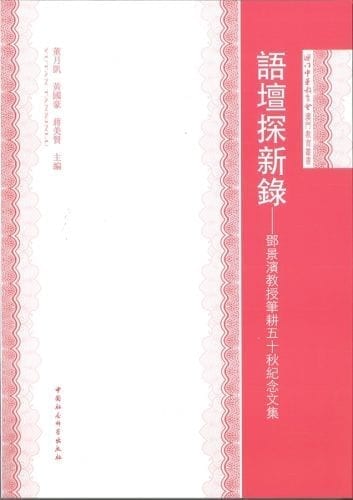 Prof Tang likes to incorporate his own research findings and real-life examples he has collected from the various tourist attractions in Macao into his teaching. He also draws upon the latest developments in various disciplines and involves students in his research. He believes these strategies not only help to enhance the students’ learning experience, but also improve their analytical skills.

‘Of all the teaching strategies I’ve used, I believe involving students in my research has been the most productive,’ he says. ‘Every year, I take some students to national academic conferences, where they present papers alongside established scholars and win prizes.’ So far his students have received 17 national academic prizes and published 52 papers, five of which were published in key national journals.

Prof Tang believes that UM students can hold their own when competing with established scholars from around the country. Indeed, they repeatedly earn praise at the conferences they attend. ‘Our students stand out in three ways,’ he says. ‘First, the topics they select are excellent. Secondly, they aim for variety when collecting material; they collect material from different sources and in different languages. Thirdly, they think critically. They analyse the material they collected in a scientific and unbiased manner, without any pre-existing assumptions. In other words, they innovate on the basis of facts.’ Zhang Jiangyan, deputy secretary general of the Association of Chinese Practical Writing, once wrote an article in Practical Writing, a key national journal, in which she highly praised Prof Tang and his students. Zhang said in the article that Prof Tang’s students use raw data for their research, give sufficient attention to details, and conduct research in a meticulous and professional manner. She added that Prof Tang is the type of professor who would do everything within his ability to help students grow, and because of his dedication, his students have been able to gain the confidence and experience the joy that come from being recognised by established scholars. 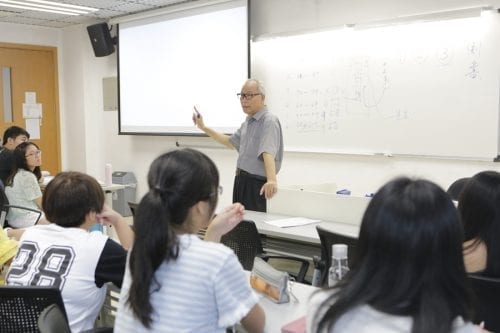 Prof Tang stresses the importance of training students through research articles, because the process of writing and revising a research article can prepare them for the more serious thesis writing. Many students from his class derived their thesis topics from the research articles they wrote in their second or third year. In the process, devoting time and energy to revising the articles is the key.Recently, he attended a national academic conference on practical writing held in Chongqing with his students Yang Fujia and Ng Si Mei. The articles that earned Yang and Ng prizes had been revised nine and eight times, respectively.

Students like Yang and Ng who have received prizes at academic conferences can serve as role models to the other students. ‘As a teacher, you only have so much time and energy. It’s impossible to take every student to national academic conferences,’ he says. ‘So I always try to find student models to inspire the other students. I want them to know that as long as they work hard, they can get to the same place.’ 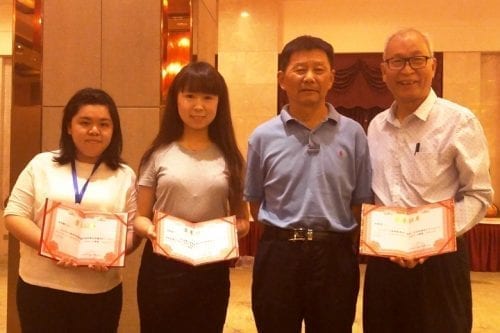 During his teaching career spanning several decades, Prof Tang has taught middle school students, college students, and graduate students. Regardless of the level of his students, he always follows a student-centred approach. ‘Take teaching classical Chinese as an example,’ he says. ‘For those students who don’t have a decent amount of knowledge about classical Chinese, if I start with texts from the most ancient times, they are bound to find learning difficult and boring. That’s why it’s important to start with the easy and well-known and then progress to the difficult and unknown.’ He likes to collect real-life examples from the memorial arches, couplets, and stone tablets found in tourist attractions and use them as teaching materials. These examples are easier for the students to digest as they already have some pre-existing knowledge of them. This way, students not only learn classical Chinese; they also learn more about the history and culture of Macao.

In addition to using real-life examples to make the learning process more engaging, Prof Tang also uses computer-assisted teaching methods, with a focus on physical objects and photographs. ‘Today’s students generally lack knowledge about classical Chinese, so I have to put some extra thought into designing the teaching content and methods, ’ he says. ‘For example, I can’t just read from a textbook. I would organise field trips or lectures to expose them to knowledge that can’t be learned from textbooks. It’s also important to let them know that knowledge is everywhere, and there are practical applications in our everyday life.’

Prof Tang’s motto is ‘Why just give fish when you can teach the art of fishing?’ He believes imparting knowledge is necessary, but teaching students how to find answers on their own is even better. That is why he makes a point of using case studies and other methods in class to help students develop problem-solving skills. 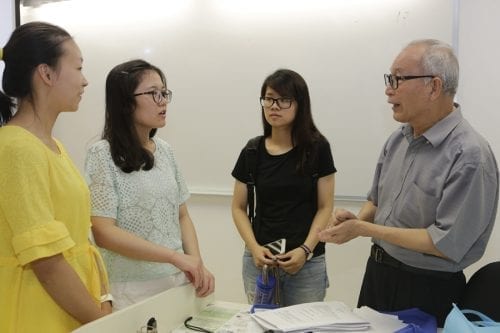 Promoting Cantonese as a Carrier of Chinese Culture

Prof Tang has published many books and papers on Macaology and Cantonese. His papers Yue Gang Ao Fang Yan Xin Ci Yu Tan Yuan (Tracing the Roots of New Words in Hong Kong, Macao, and Yue Dialects), and On the Optimization of Chinese Characters and Provincialism Characters for Yue Dialects, received a second prize in the papers category at both the first and second Macao Outstanding Research Achievement Award in Humanities and Social Sciences. He has also participated in the standardisation of the pronunciations of Cantonese words for a dictionary.

Cantonese is one of the seven major Chinese dialects. But in Prof Tang’s eyes, it is more than a dialect. ‘It’s precious cultural heritage,’ he says. ‘It inherited more from the ancient Chinese language than any other Chinese dialect. It maintained many phonological features of the ancient Chinese language. So in this way it is a carrier of the Chinese culture.’ He adds that if famous poets from ancient China such as Li Bai and Du Fu were to come back from the dead, they might not understand Mandarin, but they should be able to understand 70 to 80 per cent of modern Cantonese. ‘The current policy of the Chinese government is to vigorously promote Mandarin, while also preserving the various dialects. So we should treasure our own dialect,’ he says. 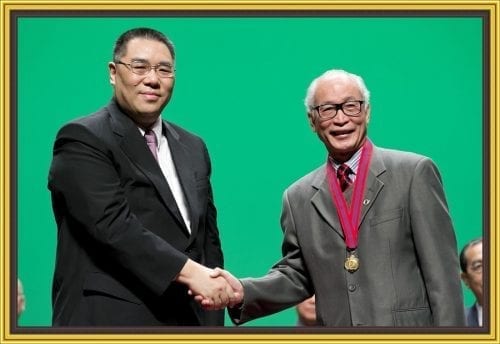 Prof Tang admits that it is not easy to juggle teaching and research. He often needs to work on the weekends and public holidays. But whenever he sees his students making progress or receiving an award, he feels all his effort was worth it; indeed, during those moments, he feels happier than when he himself receives recognition. In his students’ eyes, he is not just a passionate professor and researcher, he is also a life mentor. He often tells his students that the principles of good scholarship, such as sticking to facts, making reasonable arguments, thinking independently and critically, and having the courage to say no to false narratives, would also serve them well in life.

‘Education is the main mission of a university, so I can’t just focus on my research and neglect teaching,’ he says. ‘Every year, I will introduce something new into the class. This not only helps the students to learn more; it also allows me to make continuous progress.’ He says spending time with the students keeps him young at heart. ‘I’m really grateful to my colleagues, students, the university, and my family, for their support over the years. To this day I still feel that I’m very lucky, because I have made a career out of doing what I love,’ he says.