Text│Ella Cheong
Photo│Jack Ho, Ella Cheong, with some provided by the interviewee

‘The newspaper industry in Macao started with the publication of a Portuguese newspaper. But why was it in 1822 and not earlier?’ This question, asked during Dr Agnes Lam Iok Fong’s oral defense for her master’s thesis, reverberated in Lam’s head long after the defense was over. Indeed, it inspired her to spend the past decade seeking an answer, an answer that would reshape understanding of the origin of China’s modern newspaper industry.

Dr Lam is an expert on the history of communication and the assistant dean of the Faculty of Social Sciences at the University of Macau (UM). Her interest in the history of journalism was kindled by a book she read while preparing for the admission examination for graduate school. In an account of the history of Abelha da China, a Portuguese newspaper published in 1822, she was amazed to see the word ‘Macao’. ‘It was the first time I had ever seen the mention of ‘Macao’ in a book about the history of journalism in China,’ she recalls. ‘Up until that time, I had never thought that the first modern newspaper in China was published in Macao, a city where I was born and raised.’ 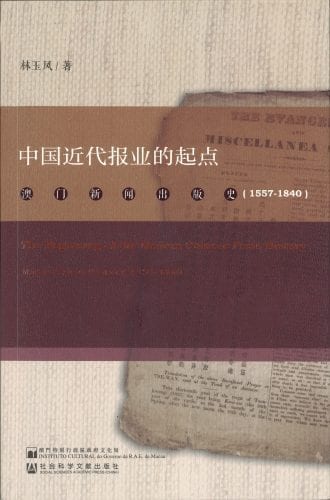 When contemplating a topic for her doctoral dissertation, Lam decided to answer the question, ‘Why did the newspaper industry in Macao start in 1822 but not earlier?’ She decided to abandon the presumption that Abelha da China was the first modern newspaper in China. Instead, she extended the historical period of her study and combed through historical data published between the mid-16th century, after Macao became a free port, and the early 19th century, before the start of the Opium War. Her latest work, The Beginning of Modern Chinese Press History: Macao Press History 1557-1840, is an expansion of her doctoral dissertation based on ten years of research. 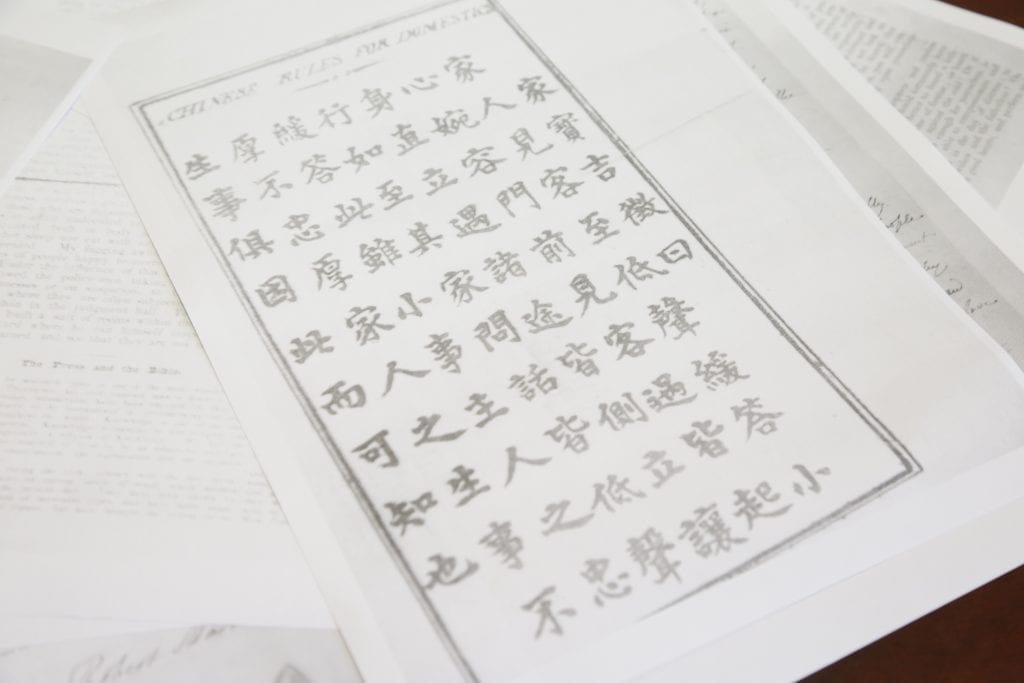 An article that teaches foreigners how to train Chinese domestic servants, which was published in 1831 in A Miscellaneous Paper, a Chinese newspaper founded by the Protestant missionary Robert Morrison.

Searching for Macao’s History in Europe

When Dr Lam began collecting data for her doctoral dissertation, she found that the original editions of many publications and related records originally published in Macao, were now scattered all over the world, housed in the archives and libraries in different countries. For example, A Miscellaneous Paper, a Chinese newspaper founded by the Protestant missionary Robert Morrison in Macao, and The Evangelist and Miscellanea Sinica, a Chinese/English bilingual newspaper also founded by Morrison, are now housed in libraries in the United Kingdom. This discovery sparked the idea to search around the world for original historical records of Macao. 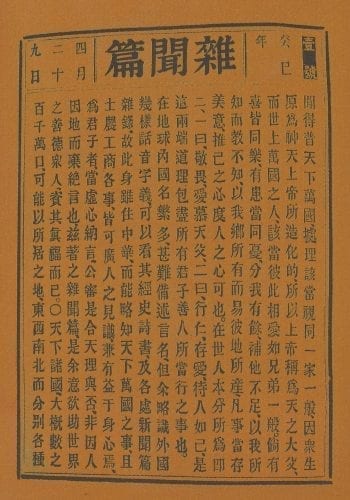 For a long time, scholars considered Abelha da China to be the first newspaper in China. If that was true, Dr Lam reasoned, then it stood to reason that newspaper printing started in 1822. But that begs the question of why there were no publications during the preceding 200 years—that is, from the 16th century, when foreign missionaries first arrived in Macao, to 1822, when Abelha da China was published.

In the 1990s, Dr Lam began to investigate whether there was a newspaper called Diário Noticioso in Macao before Abelha da China was published. A one-time journalist, she put her journalistic experience to work in her research. She travelled around the world and left no libraries unvisited in her search for evidence of the existence of this newspaper. ‘In 2005, I visited the British Library to study the manuscripts there. That was the first time I went on an overseas trip in search of historical records of Macao,’ she says. ‘Since then, I’ve been to different European libraries, including those in Italy, Germany, France, Spain, and Portugal, all by myself. Some people didn’t know the real reason I went to Europe again and again; they thought I went there every summer for holiday.’ Before obtaining research grants from UM, Dr Lam paid for these trips out of her own pocket. Now she feels very grateful that the university provides research grants to support her work. 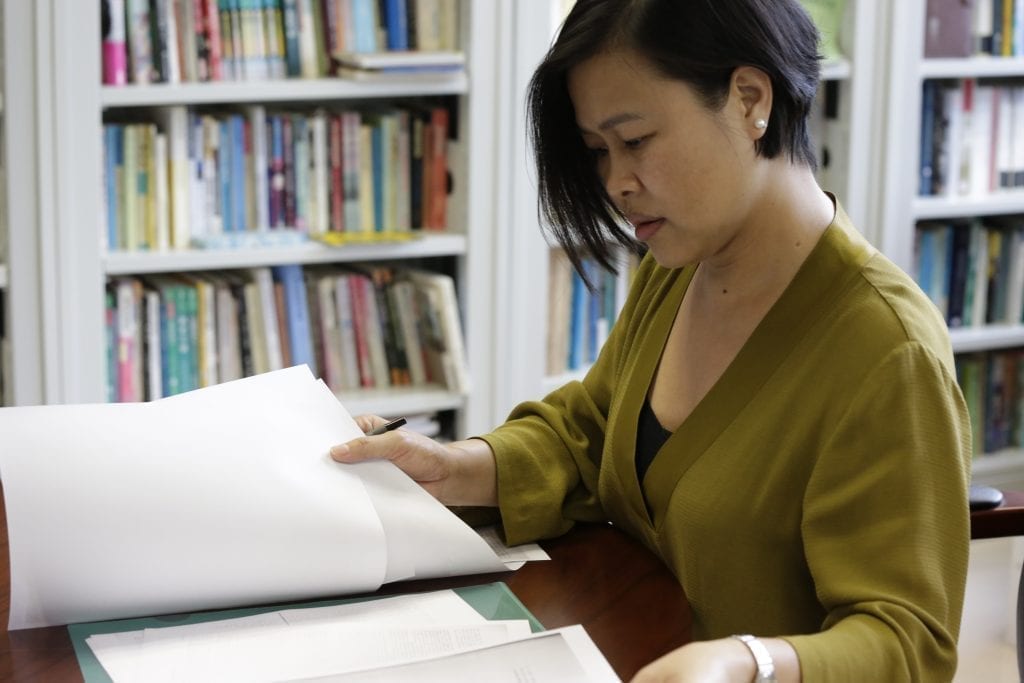 The Beginning of Modern Chinese Press History: Macao Press History 1557-1840, is based on the historical data Dr Lam collected over the past decade, a process that was fraught with difficulties. The original editions of the newspapers, books, and diaries, as well as some of the ancient books, used in the writing, were scattered around the world. To make matters worse, many of the documents she studied were written in English, Portuguese, or even Latin. Undaunted by the linguistic barriers, she bought dictionaries for different languages and waded through pages upon pages of abstruse documents, one word at a time. For those parts she failed to understand even with the help of the dictionaries, she consulted language professionals at the university. 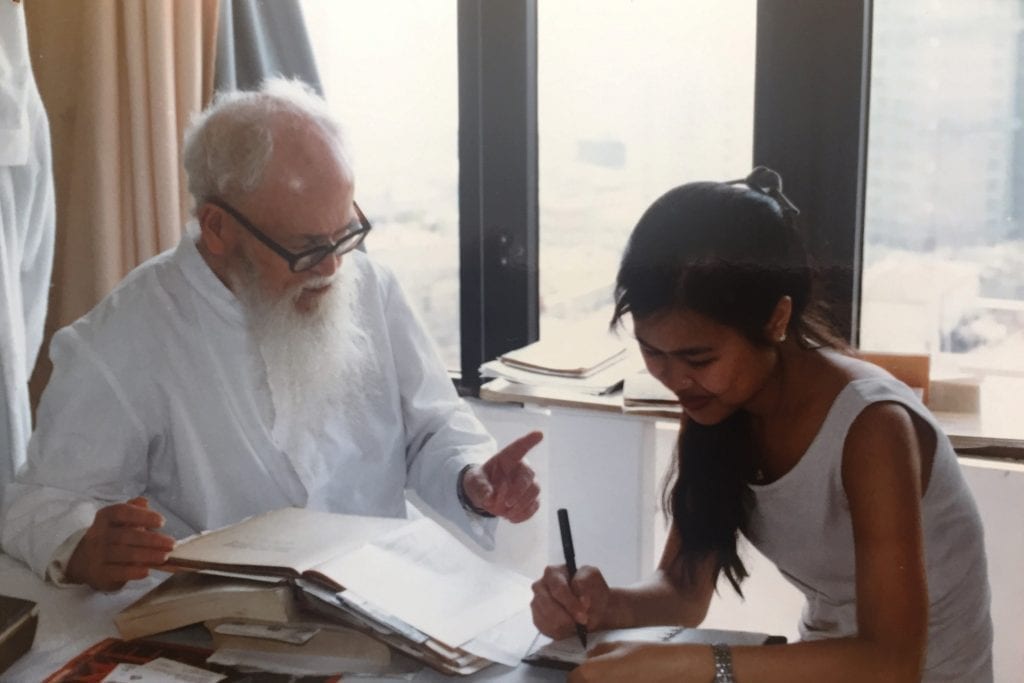 Dr Lam likens the process of verifying an astounding amount of historical facts to writing detective novels. ‘Every time I encountered a piece of information, I would wonder if this would be the answer I was looking for,’ she says. ‘If someone mentioned a book, I would go find that book to read. If the book I was reading mentioned some people, I would find those people’s diaries. I used a lot of imagination in the process. I would imagine having conversations with people from the past.’ For a time, she was unable to verify some of the historical facts mentioned in the books published by Robert Morrison. So she visited Morrison’s grave, cried, and asked him to visit her in her dreams to reveal the answers. ‘It may sound a little bizarre, but I think it was fun, it gave me a chance to converse with historical figures,’ she says. 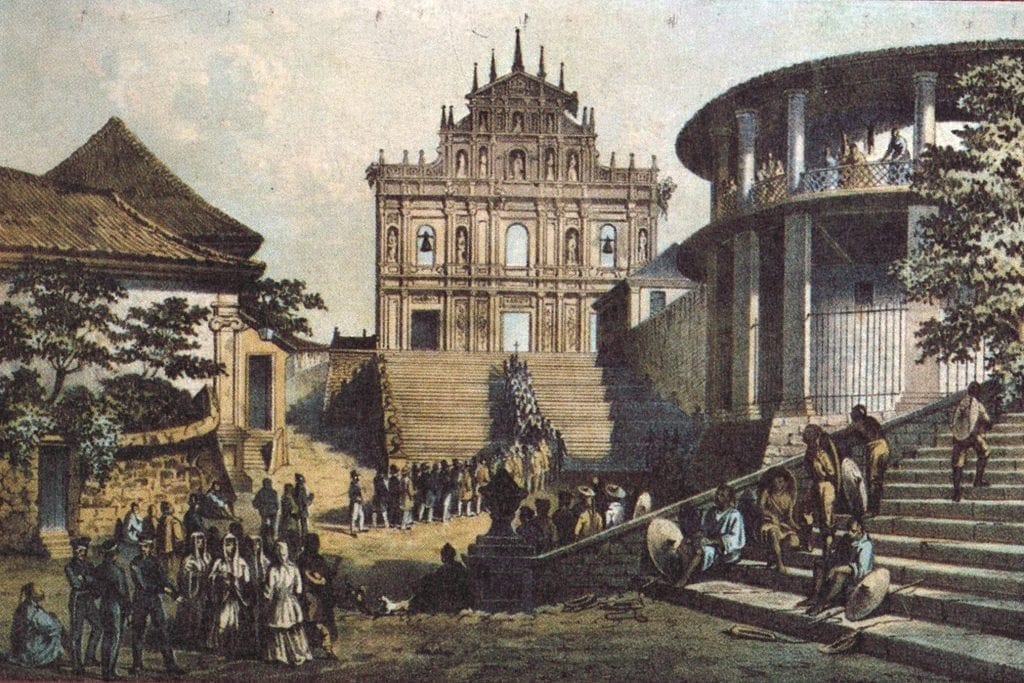 The printing place of St Paul’s Cathedral and the Society of Jesus (SJ). Pictured are the ruins of the cathedral and the nearby buildings. The SJ’s early publications were printed here.

Fruit of Ten Years’ Research Revising the History of Journalism

Dr Lam completed her primary, secondary, and college education in Macao. She received her bachelor’s degree from UM. In 1997, she joined UM’s Department of Communication as a faculty member. Since then, she has focused on the study of the history of communication, media and social change, and Macao-related issues. She never regrets spending ten years to complete the book, because her deep love of Macao made her want to uncover the historical truth and return the city to its rightful place in the history of journalism in China.

Dr Lam believes that the history of Macao’s publishing industry and the history of China’s modern publishing industry are closely related. ‘Macao’s modern publishing industry actually started earlier than we had imagined. In fact, the earliest publication in China originated in Macao instead of Guangzhou, as previously thought,’ she says. ‘As Macao natives, we should understand our own history, because if we don’t, then no one else will help us to. History is what has happened. But did it happen this way or that way? It’s important for us to find out the truth. Macao used to be an ethnically diverse and tolerant place where people were allowed to publish Chinese publications with Western printing technologies. And because of that, this city has witnessed many historical firsts.’ 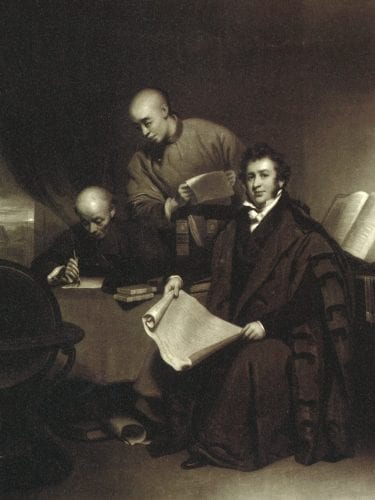 A picture of Robert Morrison translating The Bible. Dr Lam found this picture in the Victoria and Albert Museum in the United Kingdom.

Dr Lam has verified that Abelha da China was predated by many other publications in Macao, most of which had religious undertones. She has also verified that The Evangelist and Miscellanea Sinica and another newspaper are in fact the same publication, the first Chinese/ English bilingual newspaper in China. Other historical facts Dr Lam has verified include Robert Morrison’s publishing Macao’s first Chinese newspaper, A Miscellaneous Paper, in 1833, and Joaquim Jose Leite’s creating Diário Noticioso in Seminário e Igreja de São José. 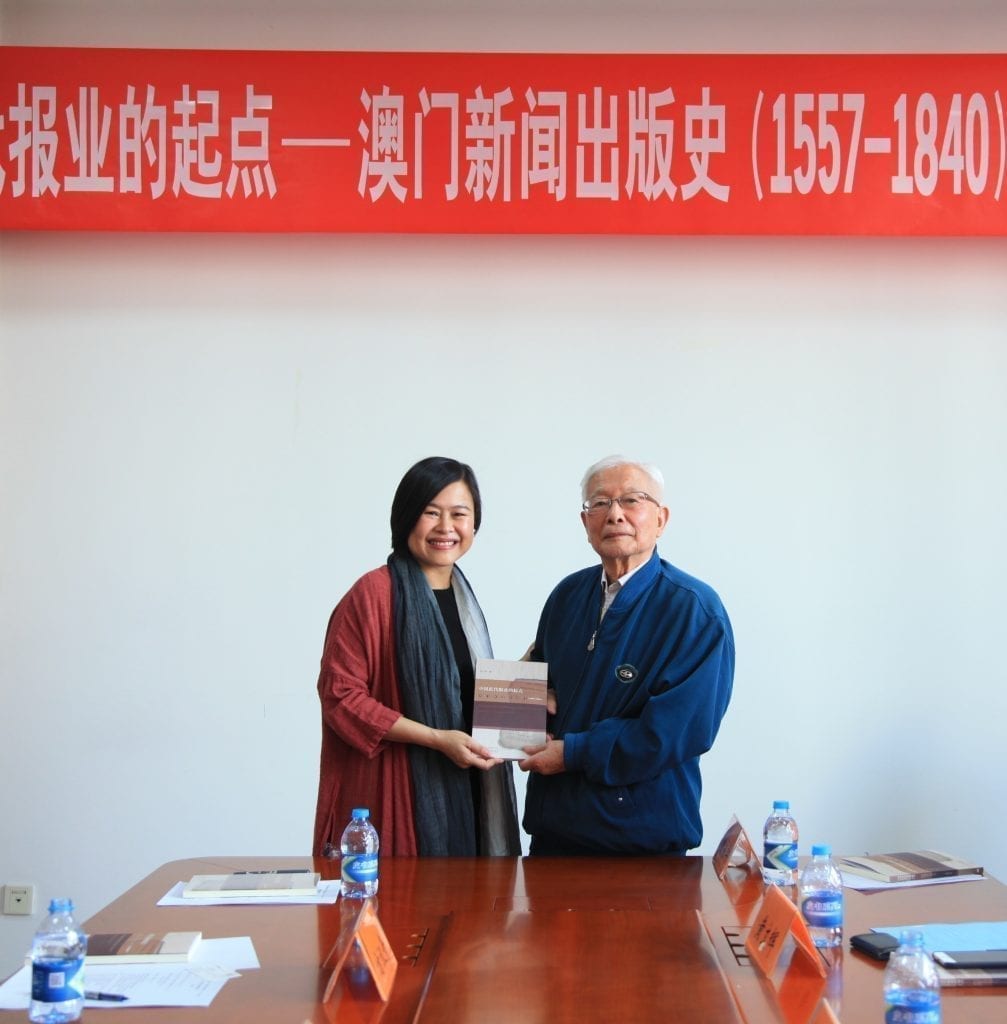 Dr Lam presents a copy of her book to her doctoral supervisor Prof Fan Hanqi, at her Beijing book launch.

Despite the many difficulties she encountered in writing the book, Dr Lam never wavered in her determination to finish the project. Now that the book has finally been published, she feels she has just completed the first step on the long journey of tracing Macao’s historical roots. ‘I want to thank my doctoral supervisor Prof Fang Hanqi for always inspiring me to look at a question from a fresh angle,’ she says. ‘I also want to thank my friends, classmates, and work colleagues at the university, for their support, guidance, and inspiration over the years.’