Text│Kelvin U
Photo│Manuel Reis, Ella Cheong, with some provided by the interviewees

It is commonly understood that a world-class university must have a world-class academic programme focused on the native language of the country in which the university is located. Oxford, Cambridge, Harvard, and Yale all have world-renowned departments of English literature and linguistics. For this reason, in the pursuit to become a world-class university, the University of Macau (UM) has worked diligently to develop the Department of Chinese Language and Literature (the Chinese department), and has identified Chinese as one of the university’s key fundamental disciplines. Chinese Language and Literature is one of the oldest disciplines at UM, and through many years of development, it has now become one of the most fruitful and influential disciplines at UM. In terms of the ratio and quality of academic papers published in top-tier journals and books produced by top publishers, UM’s Chinese department is on a par with, or even surpasses, its counterparts at other world-class universities. An external academic review committee, formed by professors from Artois University, Peking University, and Hong Kong Baptist University, has remarked that the faculty team at UM’s Chinese department has a fairly big influence in the academic communities both at home and abroad, especially in the areas of traditional Chinese ideology, culture and literature; Chinese linguistics; and new literature in Chinese.

Faculty members and students from the Chinese department have published their work in numerous prestigious journals both at home and abroad. Over the past four years, members of the department have published three academic papers in Social Sciences in China, which is China’s most prestigious academic journal in the fields of social sciences and the humanities. ‘For a department with only 16 faculty members, publishing three papers in this journal in four years is not bad,’ says Prof Zhu Shoutong, head of the department. ‘According to statistics, Chinese departments at world-class universities in mainland China on average published three to five papers in this journal during the same period, and these are departments with nearly 100 faculty members.’ The department also publishes regularly in other important academic journals, such as Literary Review, Literature & Art Studies, Collections of Essays on Chinese Literature and History, and Research in the Traditions of Chinese Culture. 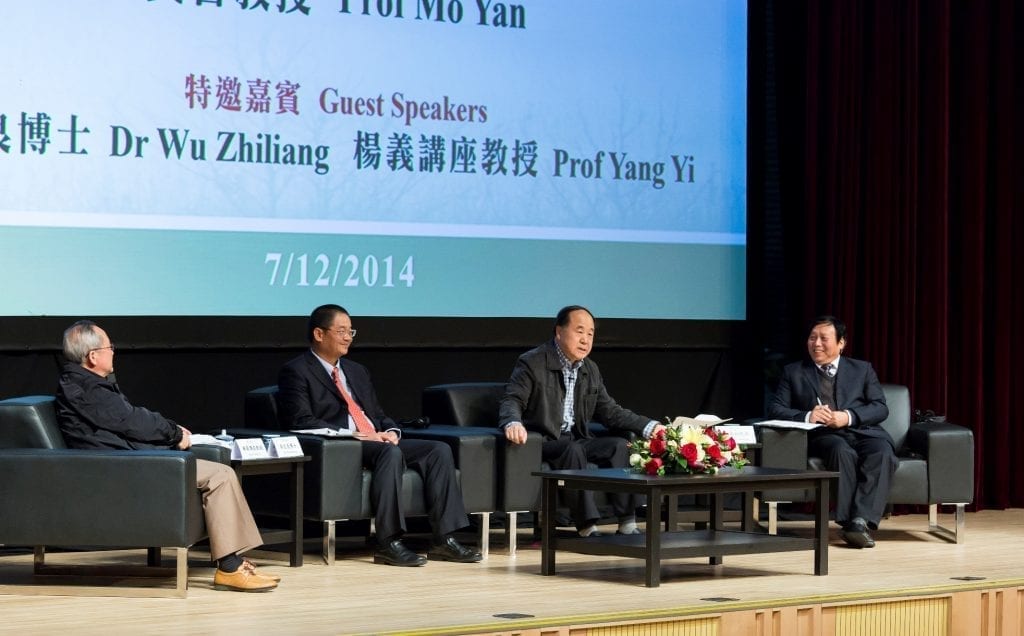 In addition to academic papers, staff in the department have also published 65 books in recent years, 35 of which were published by state publishing houses, including the People’s Literature Publishing House, Zhonghua Book Company, and China Social Sciences Press. Prof Yang Yi and his research team have published more than 900,000 words on leading thinkers from the Pre-Qin period in ancient China. Prof Yang has also completed seven lengthy papers on the subject. ‘In terms of the quantity, quality, and impact of our published works in the field, we have reached world-class standards,’ says Prof Zhu. 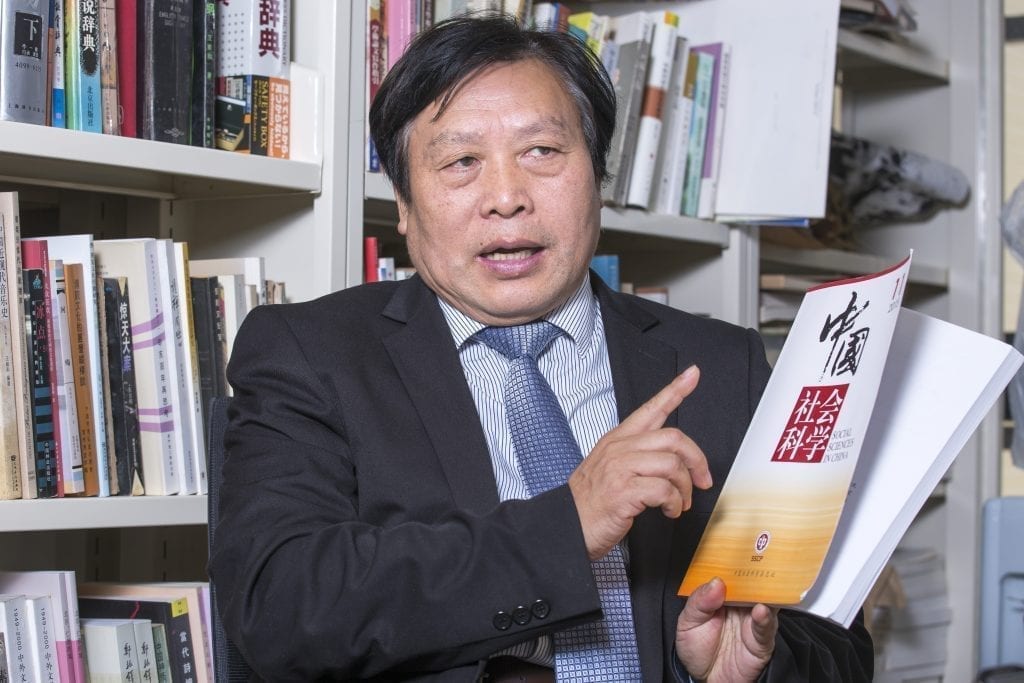 Prof Zhu Shoutong believes the Chinese department has reached world-class standards in terms of the quantity, quality, and impact of its published papers.

Although the size of the department’s faculty team is relatively small, its members are all academic heavyweights, including Chair Professor Yang Yi; Distinguished Professor De Bao Xu; and professors Xu Jie, Shi Jianguo, Tang Keng Pan, Tang Kwok Kwong, Xu Daming, Gong Gang, and Tang Chon Chit. ‘In recent years, we have recruited new professors with an international background, because we hope our professors publish their work not only in Chinese, but also in English if possible,’ says Prof Zhu. ‘Recruiting professors who are good at Chinese and English is notonly in line with the university’s policy to increase the degree of internationalisation of our department, but will also help enhance our communication with the world and improve our international competitiveness.’

Currently, nearly 50 per cent of all the doctoral candidates in the Faculty of Arts and Humanities are in the Chinese department. ‘The number of students applying to our department is increasing every year, with postgraduate acceptance ratio reaching 1/8,’ he says. ‘The number of local students applying for our undergraduate programmes is also increasingly rapidly. Of all the departments in the Faculty of Arts and Humanities, our department has been the first choice for the most applicants three years in a row.’ 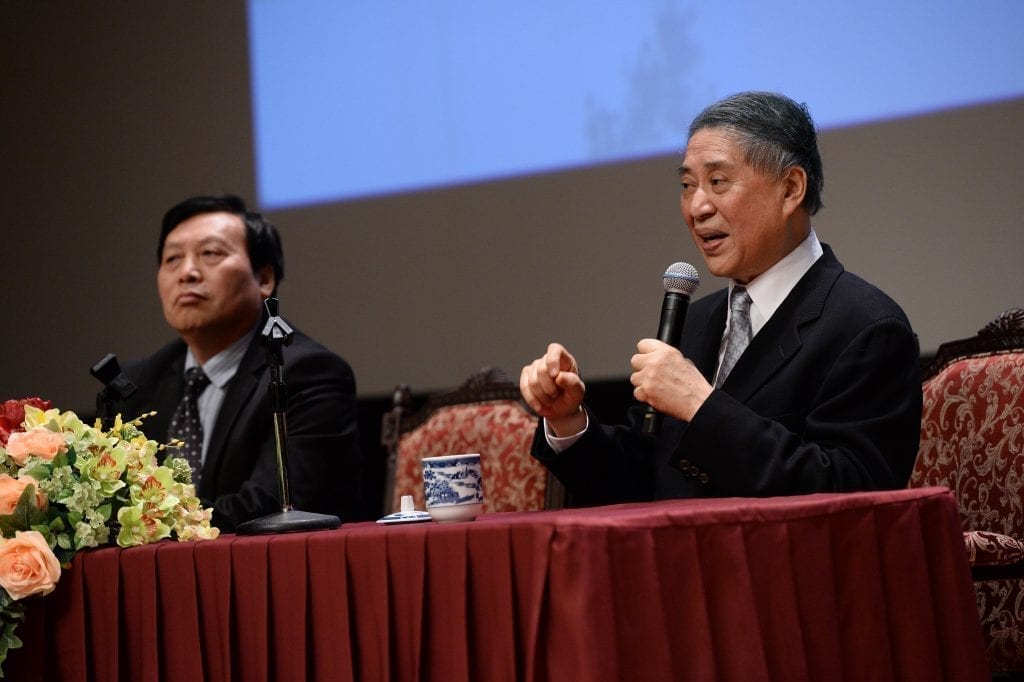 Pai Hsien-yung (right), a world-renowned writer and recipient of an honorary doctor of letters degree from UM, shares his experience in promoting Kun opera with UM faculty and students.

The academic papers by faculty and students from the Chinese department have received numerous research awards. The department’s studies on Macaology and Macao literature have received prizes at the Outstanding Achievement Awards for Macao Research in Humanities and Social Sciences several times, including a first prize. Ao Men Qing Shao Nian Xin Zha Jia Zuo Xuan (A Selected Collection of Outstanding Letters by Young Adults in Macao), co-edited by Prof Tang Keng Pan, Prof Tang Chon Chit, and Dr Sio Chio Ieong, received a second prize in the monographs category at the 18th National Academic Conference on Practical Writing. A paper on the incorrect understanding and usage of a common Chinese salutation in written communication, co-authored by Prof Tang Keng Pan and his master’s student Lin Cheng, received a second prize in the papers category at the same event. Prof Tang’s book, A Study of Practical Writing from the Perspective of Globalisation, received a first prize in the monographs category at the 16th annual conference of the Chinese Institute of Practical Writing (CIPW). Prof Shi Jianguo’s paper, titled ‘A Reconsideration of the National Common Language’, was shared in full text on the Chinese Social Sciences Net (www.cssn.cn). Launched by the Chinese Academy of Social Sciences, the CSSN is one of the most prominent and comprehensive websites in China in the field of social sciences.

Zhang Lifeng, a PhD student from the Chinese department, received an Outstanding Paper Award at the 10th Chinese Drama Festival. Cheong Mei In, a recent graduate of the Chinese department, won a third prize in the papers category at an academic conference organised by the CIPW, for her paper on unethical reporting. A paper by Wang Xinxin, a master’s student, has been included in a paper collection on ancient Chinese language, published by the Language & Culture Press under the Ministry of Education. The papers in the collection were selected from the papers submitted to the 11th National Conference on the Ancient Chinese Language, which only academics at the level of associate professor or above are eligible to attend. PhD students Jin Chunyuan and Dong Sicong won outstanding paper awards at the Second East Asia Postgraduate Forum on Literature, History and Society, and the Third Chinese Studies PhD Students’ Forum, respectively. At the Sixth International Conference on Contemporary Chinese Grammar held in Taiwan, Dong Sicong presented his paper titled, ‘Grammatical Research in “Nanguai(難怪)” Related Expressions in Chongqing Dialect’, as a fully-sponsored scholar, and received the second prize of Young Scholars Award. Dong was the only participant from Macao to receive an award at this conference. Liu Qunwei, a postdoctoral scholar from the Chinese department, received an excellence award at the First Lotus Cup International Competition in Chinese Poetry. She was the only participant from Macao to win an award at the competition. Other PhD students, including Lei Shuye and Hu Shanbing, have also received numerous awards at various Chinese poetry competitions.

Despite a short history, UM has an impressive list of honorary degree recipients, which includes nearly all of the most influential masters in the field of Chinese literature, including Pai Hsien-yung, Wang Meng, Mo Yan, Yu Kwang Chung, Louis Cha, and Jao Tsung-I. The fact that these preeminent writers have agreed to accept the honorary degrees shows their recognition of UM’s Chinese Language and Literature discipline. In recent years, the Chinese department has launched several new initiatives. Under the department’s new Writers-and-Artists-in-Residence Programme, several renowned writers, including Wang Meng and Yu Kwang Chung, have visited UM and shared their insights with UM staff and students. In addition, the department has jointly launched a programme designed to promote collaboration among Chinese departments at universities in mainland China, Hong Kong, Taiwan, and Macao. The collaboration programme involves Peking University, Taiwan University, the University of Hong Kong, and UM. It aims to foster closer collaborations in Chinese education among the four regions, to understand the importance and future of Chinese education from a broader perspective, and to provide a platform for scholars to exchange ideas on ancient and contemporary Chinese literature and language. 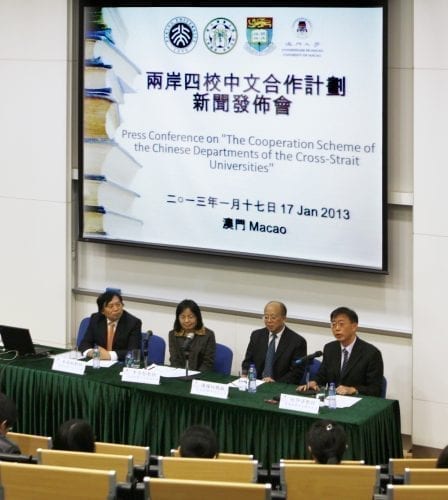 UM, Peking University, Taiwan University, and the University of Hong Kong launched a collaboration programme for their respective Chinese departments to usher in a new path for Chinese education in, and academic collaboration between, the four Chinese-speaking regions.

The programme allows Chinese departments in the four regions to combine their strengths, which not only greatly enhances the quality of liberal arts disciplines at UM, but also promotes the spread of Chinese culture in these regions and beyond. Looking to the future, Prof Zhu hopes the Chinese department will expand its global influence and further enhance the quality of its teaching and research.