Study of mahjong and everyday life in contemporary urban China is a part of my English monograph Public Life under Socialism, 1950-2000. Playing mahjong has a long history in China, which deserves to be called a ‘nation of mahjong

The Most Popular Form of Entertainment in China

Considering mahjong as a social issue is not a new phenomenon; t actually started in the late-Qing urban reform, when new elites nd local authorities regarded mahjong as a vice that wasted time and encouraged gambling. Opium and gambling became major argets of the police after these activities were criminalised in the first decade of the twentieth century. Hu Shi, one of the leaders of the New Cultural Movement, joined the anti-mahjong chorus by writing an essay entitled ‘Mahjong,’ categorising it as one of four‘devils’ (along with opium, eight-legged essays, and foot-binding) which argued that the game wasted time. After the establishment of the communist state in 1949, the government made gambling illegal, as the previous administration did, but with much greater success.

While mahjong was still played in some private family homes, it was no longer seen in public. During the Cultural Revolution, mahjong was regarded as a symbol of the ‘old culture’and almost all mahjong paraphernalia was destroyed by either the Red Guard or by people seeking to avoid punishment.Voices that defended mahjong were buried by a tidal wave of criticism, and even advocates of mahjong considered it to be a vestige of ‘old society’ that should be replaced with new forms of eisure as society became more ‘progressive’. They never anticipated hat more than half a century after the dramatic societal revolutions and reforms, not only is mahjong not extinguished, but it is flourishing to an unprecedented degree. The post-Mao reform changed the fate of mahjong entirely. The introduction of a market economy also brought many more public places for people’s leisure time, and much less governmental control of people’s personal lives. Mahjong quickly occupied people’s time and space after work, spreading from living rooms, street corners, and sidewalks to teahouses and even workplaces. The mahjong craze reached unprecedented heights. As a humorous popular saying notes, ‘Of one billion people, 900 million are gambling [with mahjong] and 100 million are waiting for their turn.’ Although this is an exaggeration, it indeed reflects the fact that mahjong is the most popular pastime in China today. 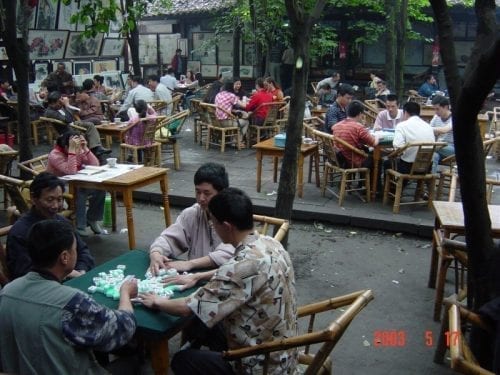 People play mahjong at a teahouse in Daci Temple, Chengdu. (Photo taken by Wang Di, in the summer of 2003.)

Despite criticisms in the media, the current government did not conduct any overall anti-mahjong movement but restricted a certain group of people to playing mahjong at certain times and places, even though such activities often involved gambling. Why does the government hold such a lenient policy? In part, perhaps, because the government acknowledges mahjong’s role diverting people’s attention from far greater issues, such as public demonstrations or protests. The government neither clearly opposed mahjong nor encouraged it. The rise of mahjong also has a close association with people’s increasing pursuit of money as influenced by the larger market economy and focus on attaining wealth. When ordinary people did not have the same opportunity as the elite to benefit from the economic development that surrounded them, playing mahjong became one way of pursuing their own dreams of wealth. Winning at mahjong depends heavily on luck, and therefore, the game is just like the lottery in that it gives people hope and a reason to think about the future. Normative terms like ‘positive’ or ‘negative’provide little help in understanding mahjong because the game functions so differently in the lives of different people.

We have seen that mahjong has caused a variety of debates. Is the game innocent entertainment or the work of the devil? Positive leisure or negative idleness? Symbol of a high quality of life or of economic stagnation? 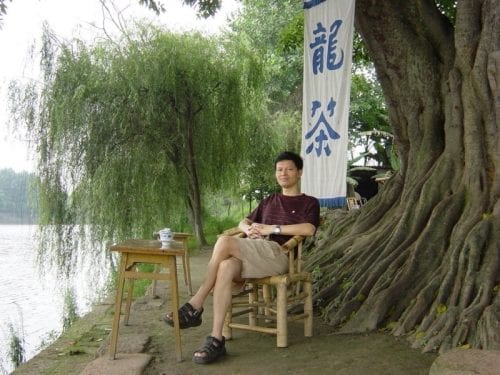 Wang Di does his fieldwork at a teahouse in Sichuan, in the summer of 2003

How did people respond to radical social changes and how did they seek to balance traditional lifestyles with modern morality? To what extent has daily life moved away from communist control and ‘socialist morality’ as a result of economic and social development? How did people and the government respond to the establishment of new standards of a so-called ‘healthy lifestyle’ and improving the city’s image? My book on public life under socialism aims to answer all of these questions and explore transformations of the economy, society, culture, and politics in urban China, by examining these issues through the window of mahjong.