The University of Macau’s (UM) new campus marks a milestone in higher education development in Macao. After three years of construction, it became fully operational in the 2014/2015 academic year.The new campus covers 1.09 square kilometres, and is 20 times larger than the old campus. UM’s relocation to the new campus was a challenging undertaking at an unprecedented scale. It would be hard to find in Macao’s neighbouring regions another case of institutional relocation approaching such a large scale, except perhaps the former Hong Kong International Airport, which was 25 per cent smaller in size than UM’s new campus. The UM relocation involved packing more than 50,000 boxes. This number alone provides some indication of the vast amount of work involved in the process. How did UM manage to complete this challenging task without disrupting teaching and administrative activities?

UM established an interim Relocation Workgroup (the Workgroup) soon after the Macao SAR government announced the new campus project in 2009. Led by UM Vice Rector (Administration) Dr Alex Lai, the Workgroup was responsible for the planning, coordination and implementation of the relocation plan. In early 2013, each of the 78 units at UM appointed a contact person to liaise with the Workgroup, to provide supplementary information and collect feedback regarding the relocation plan, to coordinate logistics and distribution work in the relocation process, and to arrange for colleagues from different units to participate in specific relocation-related tasks. 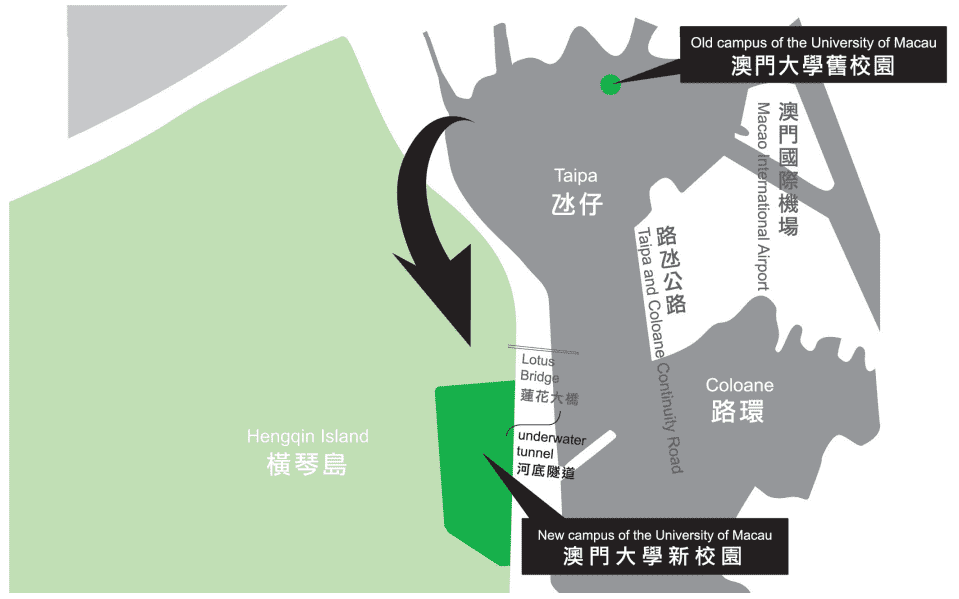 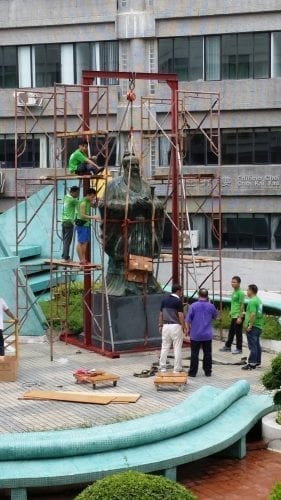 The Statue of Confucius had to be moved with a crane

Such a complicated project required a systematic plan. The fact that there are so many units at UM added to the difficulty in communication and coordination. Peter Fung Woon Kee, one of the core members of the Workgroup, says, “Each unit appointed a representative to coordinate the relocation of his or her own department. These unit representatives also served as a bridge of communication between their units and the Workgroup. All the colleagues knew about the relocation plan beforehand and so everyone was fully prepared. All they waited was for the relocation date to be confirmed so they could carry out the relocation plan.” 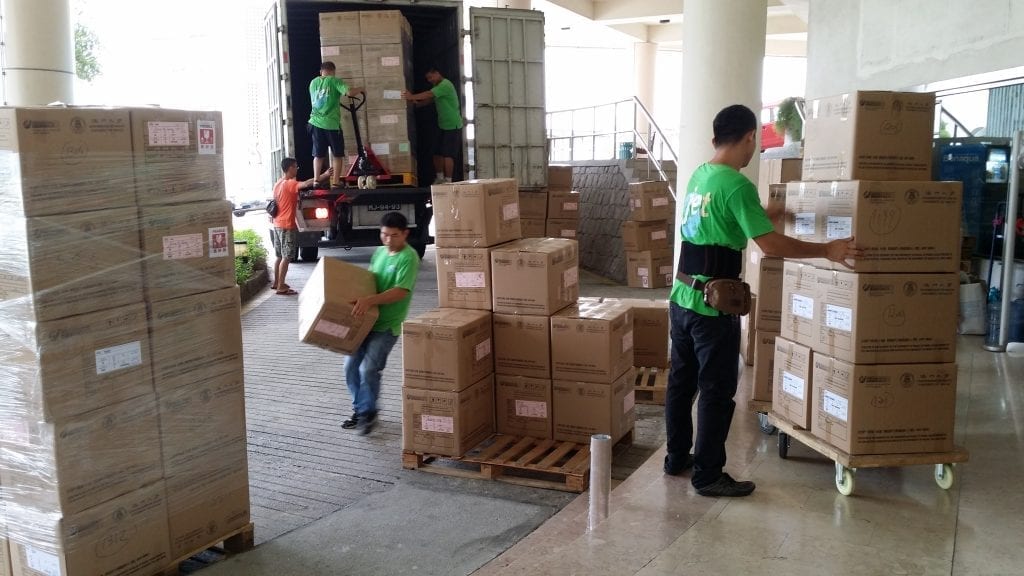 Over 50,000 boxes were used for packing during the relocation

Cornelia Ho, member of the Relocation Workgroup
No Precedent to Draw Experience From

Because there was no precedent in modern Macao history for relocation at such a large scale, the Workgroup visited other places in China, trying, without much success, to gain experience from similar relocation projects. Cornelia Ho Ka Lei, another core member of the Workgroup, says, “The Workgroup visited the University of Hong Kong, hoping to learn what kinds of difficulties are likely to be encountered. But HKU’s situation was different. It never relocated in its entirety. Only some of its departments moved to a neighbouring teaching building.

It turned out that no other sizable university in China ever moved to a new campus in its entirety within a relatively short period of time. So members of the Workgroup had no choice but to put themselves in the shoes of a user to anticipate what problems were likely to occur and which information needed to be obtained. A consulting firm provided information and expert opinions to us, but even this consulting company had never undertaken such a large project. 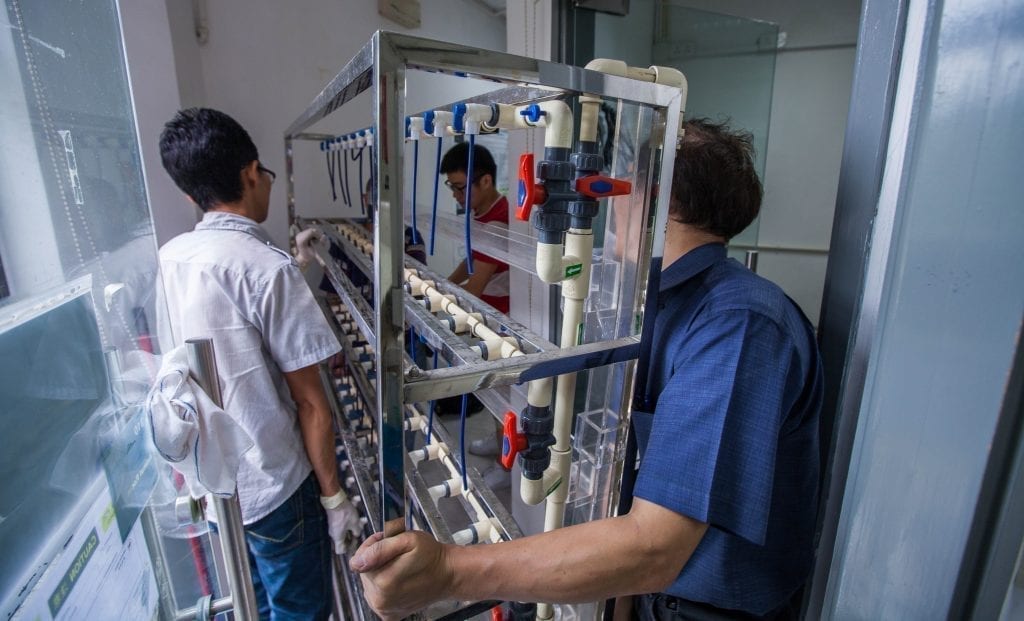 The relocation was carried out in three stages, with the bulk of the work conducted in the summer holiday between June and August, six months after the Campus Development Office (CDO) and Campus Management Office (CMO) first moved to the new campus. “The CDO and CMO’s moving to the new campus first was very useful to the Workgroup, because each experience could reveal problems that hadn’t entered our consideration,” says Cornelia. “For example, we learned that it would be best to prepare different kinds of forms beforehand so we could have a detailed record of the items being moved, and in case of any discrepancy, we could find the missing box by going through such records. These small-scale exercises in relocation helped us identify areas for improvement, which in turn made the large-scale relocation smoother.” 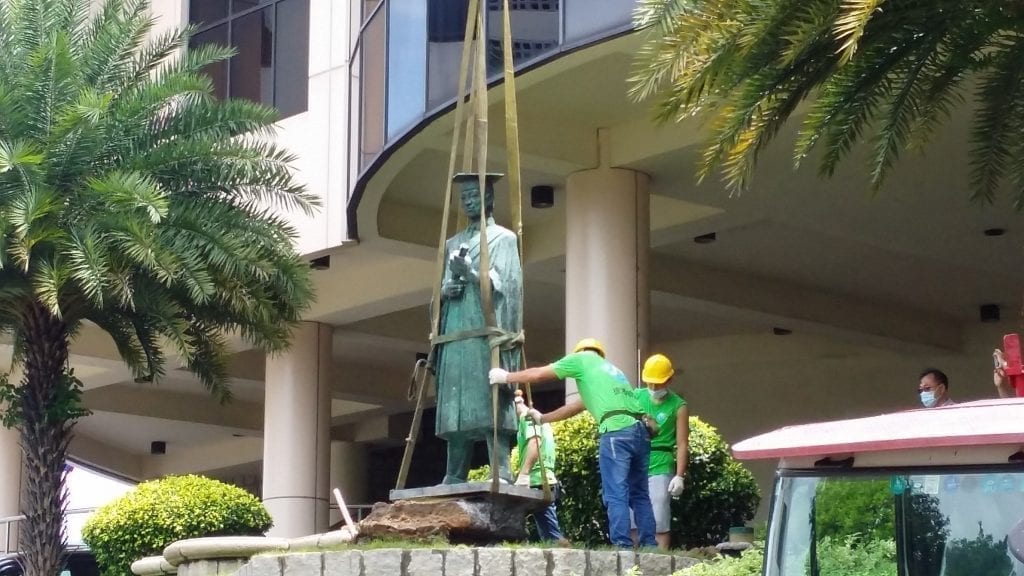 Workers are handling the statue

The relocation was conducted in three stages, between December 2013 and August 2014. 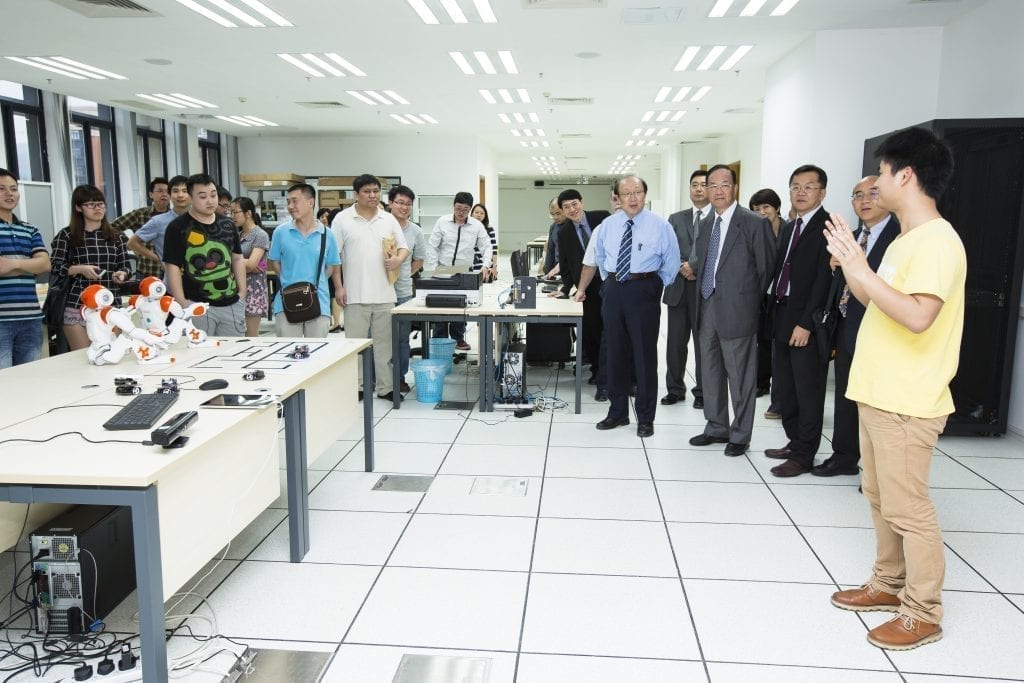 The Smart Environment and Cybernetics System Laboratory, the first laboratory to move to the new campus 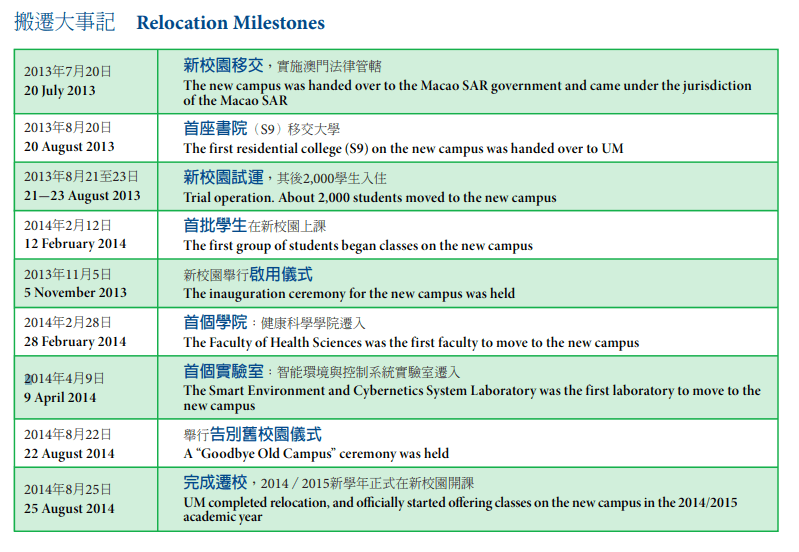 Every exercise in relocation was a test of the Workgroup’s ability to quickly respond to changes. The fact that the relocation plan had to be constantly adjusted according to the actual date when each building passed quality inspection made it more difficult for the Workgroup to set the official move-in date, and for this reason the Workgroup made several contingency plans. “We have had several different versions of contingency plans,” says Cornelia. “Luckily, we didn’t meet any major setbacks, such as typhoons or storms, and we didn’t find ourselves in a situation where a building couldn’t become operational.”

The Workgroup consisted of representatives from the various units, most of whom didn’t have experience with moving or logistics management, so it was a steep learning curve for many involved in the process. “Each time before we moved something to the new campus, we would consider worst-case scenarios, and we would make a crisis response checklist,” Brandon says. “For example, what if the moving trucks broke down on the way? So we requested the moving company to have backup trucks on standby just in case.”

Safety was the overriding concern for the Workgroup throughout the process of relocation. To ensure the safety of assets, safety of personnel, and security on the campus, the Workgroup made sufficient contingency plans. “There were many details to pay attention to,” says Peter. “Even after we gave the go-ahead to move, we would double check with the parties concerned to make sure that the building was truly ready for use in every way. Overall, the relocation was quite smooth, with zero unexpected events, and this made our hard work worthwhile.” 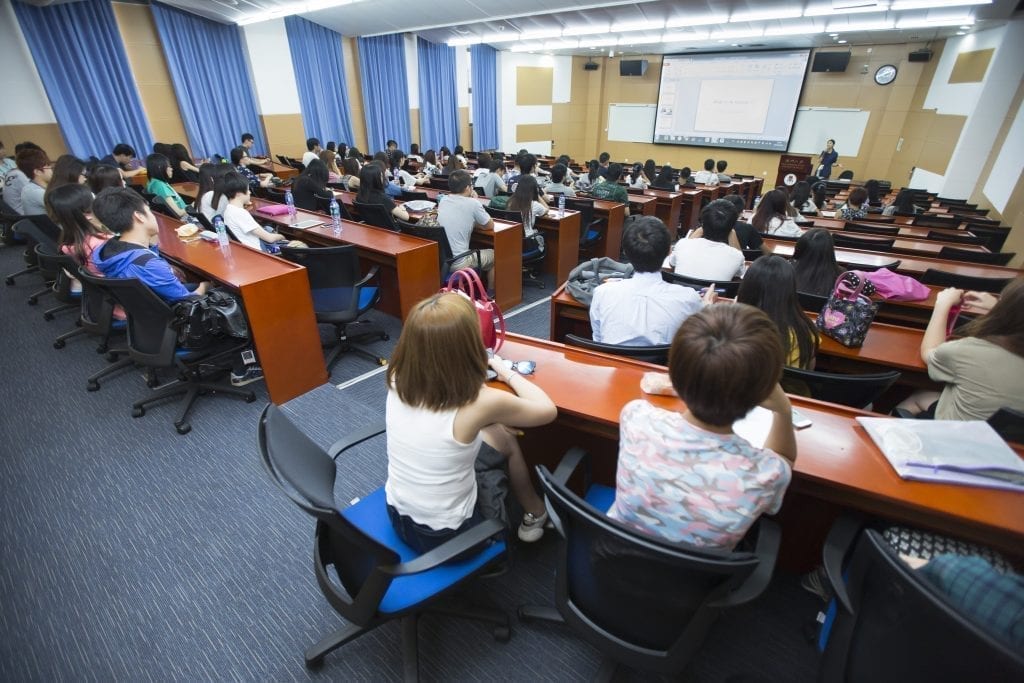 UM completes relocation, and officially starts offering classes on the new campus in the 2014/2015 academic year

The bulk of the relocation work was carried out in the summer holiday to minimise disruption of teaching and research activities, because there were relatively few students on the campus in the summer holiday. But this also meant that the relocation had to be completed on a very tight schedule. Foreseeing the possibility that some faculty members would not be in Macao at the time of relocation, the Workgroup prepared a sample written authorisation to provide maximum convenience for these faculty members. Those who would be absent at the time of relocation only needed to pack their personal effects before leaving Macao and their representatives designated in the written authorisation would take care of the moving for them. Also, considering that some students remained on campus during the summer holiday, the Workgroup tried its best to prevent the relocation from causing interruption of services to students. “Before any unit moved to the new campus, it would send an email notification to the university community telling everyone when and for how long its services would be interrupted,” says Peter. “Some units, such as the Registry and the Finance Office, went one better—they had one or two colleagues move to the new campus first to minimise the down time caused by the entire department’s moving. Some decided to move on the weekends. Some even managed to maintain normal operation on both campuses during the relocation.” 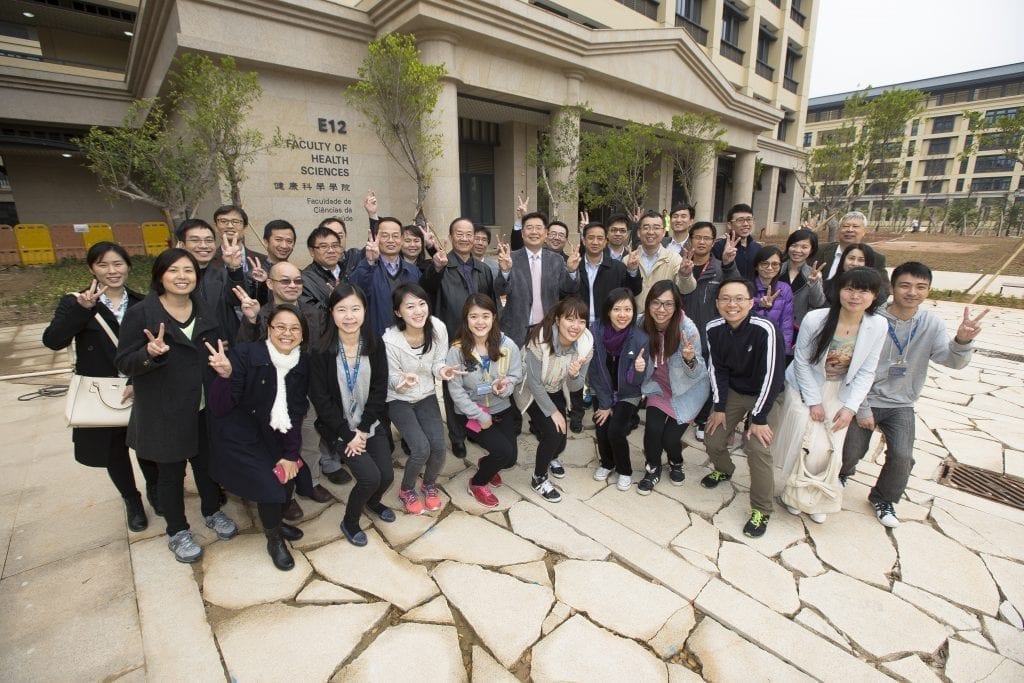 The first faculty to move to the new campus

The computer rooms on the old campus gradually stopped opening, and what needed to be disassembled, packed, moved, unpacked, and re-assembled within the shortest time possible included 3,278 computers, over 10,000 computer accessories and peripherals, 70,000 network access points, and innumerable electronic locks. Great care was taken during the transport. Anticipating future needs, the university also bought some new computers to make sure that computer services were still available during the relocation process. At the same time relocation was going on, preparations were made for the new semester. 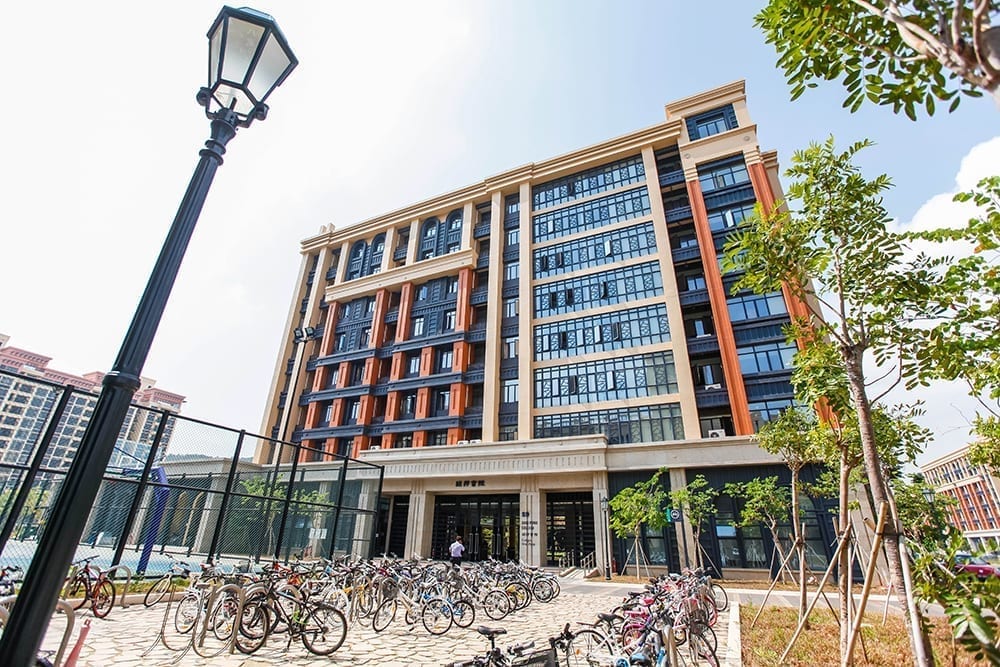 The first residential college (S9) handed over to UM

Within just a few months, all the units at UM successfully completed the difficult task of relocating to the new campus by following the principle of “moving in stages and in batches”. The success was made possible by the university’s ability to quickly adjust the relocation plan according to changing circumstances as well as the unreserved support and cooperation from all UM members.